A Possible Planet Hidden in the Data

One of the great joys of science is taking something that seems beyond reach and figuring out a way to do it. We can use a coronagraph, for example, to screen out much of the light of a star to see planets around it, but coronagraphs can only do so much, as planets too near the star are still hidden from view. Now scientists have used an unusual observation to deduce information about one such hidden planet and its interactions with a circumstellar disk.

Announced at the recent meeting of the American Astronomical Society, the work involves 18 years of archival observations with the Hubble Space Telescope, which have yielded an intriguing shadow sweeping across the disk of the TW Hydrae system. We’re evidently looking at a young planetary system in formation, as the star — slightly less massive than the Sun and about 192 light years away in the constellation Hydra — is only about 8 million years old. Helpfully for our work, the TW Hydrae disk is seen face-on from our perspective. 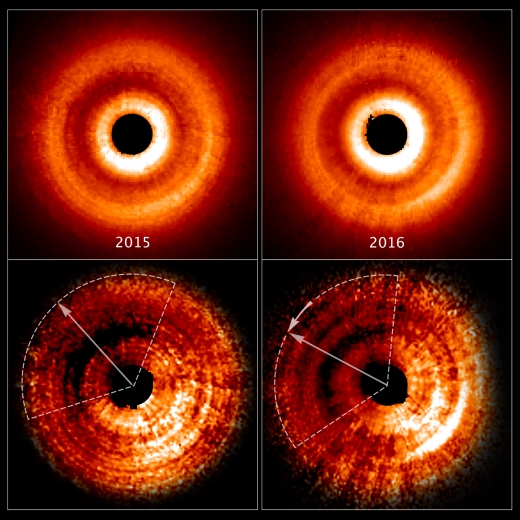 Image: These images, taken a year apart by NASA’s Hubble Space Telescope, reveal a shadow moving counterclockwise around a gas-and-dust disk encircling the young star TW Hydrae. The two images at the top, taken by the Space Telescope Imaging Spectrograph, show an uneven brightness across the disk. Through enhanced image processing (images at bottom), the darkening becomes even more apparent. These enhanced images allowed astronomers to determine the reason for the changes in brightness. The dimmer areas of the disk, at top left, are caused by a shadow spreading across the outer disk. The dotted lines approximate the shadow’s coverage. The long arrows show how far the shadow has moved in a year (from 2015-2016), which is roughly 20 degrees. Credit: NASA, ESA, and J. Debes (STScI).

We have no other circumstellar disk with an archival dataset this rich, allowing the effect to be studied in depth. John Debes (Space Telescope Science Institute, Baltimore) was able to put observations from Hubble’s Space Telescope Imaging Spectrograph (STIS) together with images from different observing runs, some of which included the Hubble Near Infrared Camera and Multi-Object Spectrometer (NICMOS).

The STIS observations use the instrument’s coronagraph to look close to the star, but the coronagraph still can’t reveal an image of the planet itself. The shadow, however, is another matter. It has swept around the disk counter-clockwise until returning in 2016 to the same position it was in in 2000. The disk’s slow rotation ruled out a feature that was itself a part of the disk, implicating a shadow caused by a tilt to the inner disk relative to the outer. Observations from the Atacama Large Millimeter Array (ALMA) at submillimeter wavelengths backed the idea.

Debes believes a hitherto unseen planet is the most likely cause of the twisted inner disk, pulling material out of the disk plane to block light from the star, thus producing the shadow sweeping across the outer disk. If this is the case, we are talking about a planet roughly 160 million kilometers from the star, too close to observe even with STIS, which can penetrate as close to the star as the orbit of Saturn (roughly 1.5 billion kilometers). 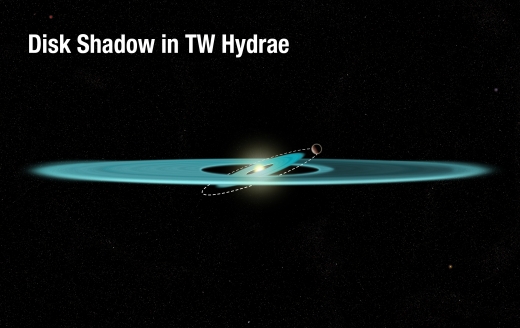 Image: This diagram reveals the proposed structure of a gas-and-dust disk surrounding the nearby, young star TW Hydrae. The illustration shows an inner disk that is tilted due to the gravitational influence of an unseen companion, which is orbiting just outside the disk. Credit: NASA, ESA, and A. Feild (STScI).

To produce the effects Hubble has noted, the planet would need to be about the size of Jupiter. Recent work on TW Hydrae with ALMA has confirmed a gap in the disk about 14.5 million kilometers from the star, perhaps the signature of another planet clearing the inner disk. Thus we are working with a phenomenon that allows us to study early planet formation in an inner system that is otherwise inaccessible, simply by measuring these broad effects.

“What is surprising is that we can learn something about an unseen part of the disk by studying the disk’s outer region and by measuring the motion, location, and behavior of a shadow,” Debes said. “This study shows us that even these large disks, whose inner regions are unobservable, are still dynamic, or changing in detectable ways which we didn’t imagine.”

Next post: A Vision to Bootstrap the Solar System Economy