PROCYON: An Overview of Cometary Water

The Japanese PROCYON spacecraft (Proximate Object Close flyby with Optical Navigation) has just given us an interesting case of repurposing a scientific instrument, not to mention drawing value out of a mission whose initial plans had gone awry. Launched together with JAXA’s Hayabusa 2 probe in late December of 2014, PROCYON was to have flown by asteroid 2000 DP107 in 2016, but a malfunctioning ion thruster put an end to that plan.

Fortunately, PROCYON carried LAICA, a telescope that was put to use to study the Earth’s geocorona (the outermost layer of the atmosphere). Developed at Japan’s Rikkyo University, LAICA observes emissions from hydrogen atoms, a useful capability when turned to comet studies, as a team of researchers has now done with comet 67P/Churyumov-Gerasimenko. Water being the most abundant cometary ice, its release rate helps map activity on the comet and offers clues to how water was incorporated into comets in the early Solar System. 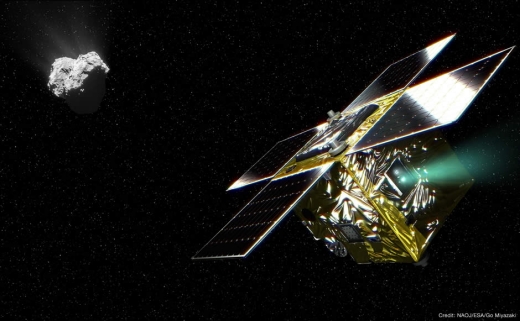 The researchers, from the National Astronomical Observatory of Japan, University of Michigan, Kyoto Sangyo University, Rikkyo University and the University of Tokyo, set out to map the entire hydrogen coma of comet 67P, the same comet studied in such spectacular detail by the European Space Agency’s Rosetta mission. The challenge to Rosetta, however, was that being inside the cometary coma, it could not observe the entire coma structure.

None of this was in the original PROCYON mission, but it became clear that the spacecraft could be valuable in supplementing the Rosetta observations. Rosetta had studied specific areas on the comet, but the researchers wanted an estimate of the total amount of water released by the comet per second, which in turn demanded a model for the coma itself. If Rosetta could not provide the answer, PROCYON could study the coma in its entirety.

Adapting PROCYON/LAICA for a comet proved workable. The hydrogen atoms in a cometary coma come from water molecules ejected from the nucleus which are then broken apart by ultraviolet radiation from the Sun. Coma models based on these processes allowed the team to estimate the water release rate based on a brightness map of the hydrogen atoms. 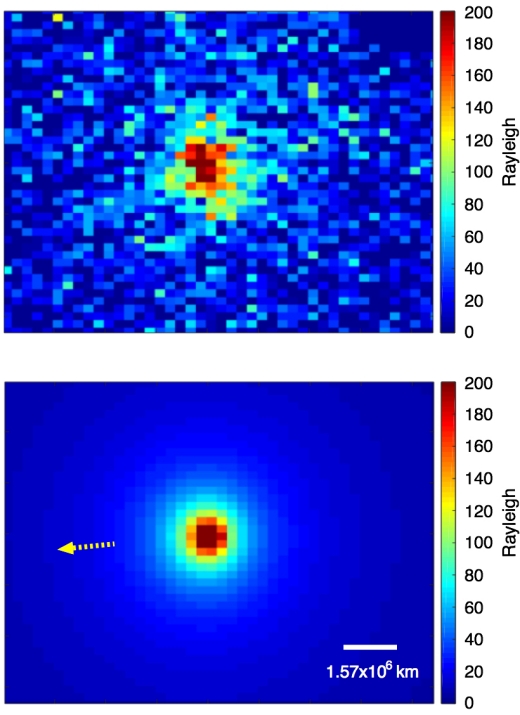 Image: Processed and cropped hydrogen-Lyα image of the comet 67P/C-G in Rayleigh units (upper panel) taken by the LAICA telescope on September 13, 2015 UT and the hydrogen coma appearance predicted by a two-dimensional axi-symmetric model of the atomic hydrogen coma (lower panel). The yellow dotted arrow in the lower panel indicates the direction to the Sun at the time of observation. Credit: NAOJ.

Working with observations of comet 67P’s entire hydrogen coma, the researchers were able to derive its absolute water production rates near the 2015 perihelion. This allowed them to test their developing models for the coma, which could be combined with the Rosetta results to estimate the total ejected mass of the comet during this period. Credit the high spatial resolution of the LAICA instrument and the pointing control of PROCYON for the result.

These are useful results, but let’s also look at what they imply about how we design our missions. PROCYON is a small cube about 60 cm to the side weighing 65 kg. The low-cost mission has been able to support key elements of a much larger mission with additional observations in a way that JAXA believes to be a model for small spacecraft in the future.

As we continue to explore what we can do with CubeSats and other micro-designs, we can think in terms of ‘clusters’ of small spacecraft networking together to reduce overall risk and provide widely dispersed observing platforms for a variety of targets. Swarms of micro-sailcraft to the outer planets are just one scenario that may grow out of spacecraft interactions like these.