A key way to learn more about a given exoplanet is to home in on the properties of its star. So argue Stephen Kane (San Francisco State University) and colleagues in a new paper slated for the Astrophysical Journal. The star in question is Wolf 1061 (V2306 Ophiuchi), an M-class red dwarf some 13.8 light years away in the constellation Ophiuchus. In December of 2015, Australian astronomers announced the discovery of three planets around the star.

Drawn out of data from the HARPS spectrograph at La Silla, the planets are all super-Earths, their radial velocity data supplemented with eight years of photometry from the All Sky Automated Survey. All three seem likely to be rocky planets, but firming this up would take transits, which the discovery team at the University of New South Wales estimated might occur, with a likelihood of about 14 percent for the inner world, dropping to 3% for the outer.

Kane and team investigate the transit question in light of the fact that that two recent papers have produced sharply different orbital periods for the outermost planet here, though both find planet c near or within the habitable zone, which itself depends on the star’s luminosity and effective temperature. Both the recent papers see reasonably high transit possibilities, but Kane’s work rules out transits of the two inner worlds, leaving open a possibility for the outer.

The researchers have used observations from the Center for High Angular Resolution Astronomy (CHARA) interferometric array at Mount Wilson Observatory near Los Angeles. From this emerges a precise stellar radius measurement (0.3207±0.0088 R⊙), from which the team has calculated the star’s effective temperature and luminosity. The photometry data reveal a stellar rotation period of 89.3±1.8 days. The work has useful implications for upcoming space-based exoplanet studies. As the paper notes:

The assessment of host star properties is a critical component of exoplanetary studies, at least for the realm of indirect detections through which exoplanet discoveries thus far have predominantly occurred. This situation will remain true for the coming years during which the transit method will primarily be used from space missions such as the Transiting Exoplanet Survey Satellite (TESS), the CHaracterising ExOPlanet Satellite (CHEOPS), and the PLAnetary Transits and Oscillations of stars (PLATO) mission. Of particular interest are the radius and effective temperature of the stars since the radius impacts the interpretation of observed transit events and the combination of radius and temperature is used to calculate the extent of the HZ.

And indeed, it is through this painstaking analysis of stellar properties that the researchers have been able to calculate habitable zone boundaries for Wolf 1061 of 0.09–0.23 AU. Have a look at the paper’s Figure 8, which shows the Wolf 1061 system as diagrammed from above. 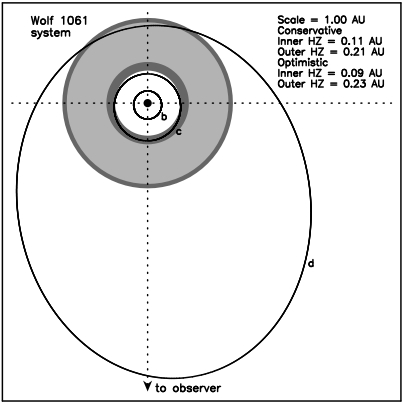 Image: Figure 8 from the paper shows the orbits of the planets overlaid on the habitable zone. The scale here is 1.0 AU to the side, with the ‘conservative’ habitable zone shown as light gray, and the more optimistic extension shown in dark gray. Credit: Kane et al.

…planet c is quite similar to the case of Kepler-69 c, which was proposed to be a strong super-Venus candidate by Kane et al. (2013). Indeed, both of the inner two planets, terrestrial in nature according to the results of both Wright et al. (2016) and Astudillo-Defru et al. (2016b), lie within the Venus Zone of the host star (Kane et al. 2014) and are thus possible runaway greenhouse candidates.

Measuring stellar parameters unlocks the boundaries of the habitable zone, allowing the researchers to study the planetary orbits and weigh the chances for liquid water on the surface. The results hardly favor the Wolf 1061 system as a promising candidate for life.

We find that, although the eccentric solution for planet c allows it to enter the optimistic HZ, the two inner planets are consistent with possible super-Venus planets (Kane et al. 2013, 2014). Long-term stability analysis shows that the system is stable in the current configuration, and that the eccentricity of the two inner planets frequently reduces to zero, at which times the orbit of planet c is entirely interior to the optimistic HZ. We thus conclude that the system is unlikely to host planets with surface liquid water.

The paper is Kane et al., “Characterization of the Wolf 1061 Planetary System,” accepted for publication at the Astrophysical Journal (preprint).