By ‘Photogravitational Assists’ to Proxima b

Given the distances involved, faster would always seem to be better when it comes to interstellar flight. Voyager, which took 12 years to get to Neptune and roughly 35 years to encounter the heliopause, would take 75,000 years to cross the 4.22 light years to Proxima Centauri. Voyager’s 17 kilometers per second clearly doesn’t cut it, but how fast can we realistically hope to go?

Let’s say we manage to build the phased laser array contemplated in the early Breakthrough Starshot discussions. Starshot’s researchers contemplate driving small sails to 20 percent of the speed of light, a figure that should allow safe passage through the interstellar medium for a large percentage of the sails sent. But get to Proxima Centauri in 20 years and another problem arises: Each sail blows through the system in mere hours. In fact, at 0.2c, these sails cross a distance equivalent to the Moon’s orbit around the Earth in six seconds. Hence the huge problem: How to explore the system we’ve reached?

A new paper from René Heller (Max Planck Institute for Solar System Research, Göttingen), working with German colleague Michael Hippke, gives us another way to frame the matter. I would say that it’s not so much an alternative to Starshot as an idea that could be pursued along with it, and perhaps implemented as a follow-on to any early sail flybys of Proxima. For Hippke and Heller believe a somewhat slower craft could make the Proxima crossing, but also achieve a bound orbit around the star and perhaps even its planet, Proxima Centauri b. 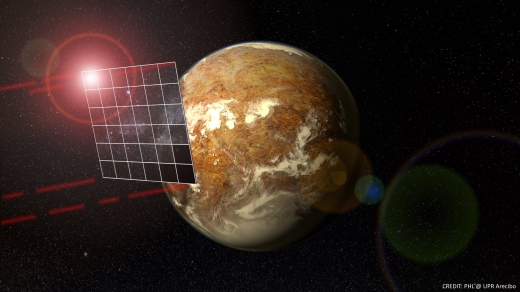 Image: Artist concept of an Autonomous Active Sail (AAS) approaching the potentially habitable exoplanet Proxima b. The reflection of Proxima Centauri and background stars are seen on the mirror-like surface of the sail. Four communication lasers beams are shown firing from its corners to transmit information back to Earth. The lower right panels of the sail are in the process of becoming darker to change its direction and orientation from differences in radiation pressure. Credit: Planetary Habitability Laboratory, University of Puerto Rico at Arecibo.

At the heart of the concept are what the duo call ‘photogravitational swings,’ which are used to decelerate an incoming light sail and deflect it. Here things get more interesting still, because Heller and Hippke believe the proper use of these maneuvers will allow flybys of both Centauri A and B enroute to Proxima itself. With much higher levels of brightness than the red dwarf Proxima Centauri, Centauri A and B are used as ‘photon bumpers’ to slow the spacecraft, dropping it from the 13,800 kilometers per second of cruise to 1280 km/sec.

Launching from our Solar System involves the Sun’s photons alone. The numbers the authors put forth show a graphene sail closing to within 5 solar radii receiving enough of a ‘sundiver’ style boost to reach 4.6% of lightspeed. Made of graphene, the sail, some 316 meters to the side, takes 95 years to make the crossing to Centauri A, where it uses both photon pressure and the gravitational pull of the star to reduce speed. A second encounter, with Centauri B, allows the sail to drop to 1280 km/sec for transfer into a bound orbit at Proxima, one that could gradually be adjusted into a planetary orbit around Proxima b.

The paper calculates 46 years to make the crossing between the AB binary and Proxima, making for a total travel time of 141 years. That’s a good bit more than the lifetime of a researcher, the figure often cited as acceptable for a deep space mission, but if we abandon that preconception, the advantages are considerable. From the paper:

In a more general context, photogravitational assists of a large, roughly 105 m2 = (316 m)2 -sized graphene sail could (1.) decelerate a small probe into orbit around a nearby exoplanet and therefore reduce the technical demands on the onboard imaging systems substantially; (2.) in principle allow sample return missions from distant stellar systems; (3.) avoid the necessity of a large-scale Earth-based laser launch system by instead using the sun’s radiation at departure from the solar system; (4.) limit accelerations to about 1,000 g compared to some 10, 000 g invoked for a 1 m2 laser-riding sail; and (5.) leave of the order of 10 gram for the sail’s reflective coating and equipment.

These are powerful advantages, especially if they forego the need for a phased laser array on the Earth as the launch system (although it should be pointed out that such an array, once built, would have myriad uses for exploration in the Solar System as well as interstellar applications). And the prospect of a platform in another star system, able to return data for years in a period of close observation, is a huge incentive. It could be argued that we are far from being able to craft the graphene sail depicted in this paper, but several decades of technological development could well make graphene our tool of choice for sail missions. 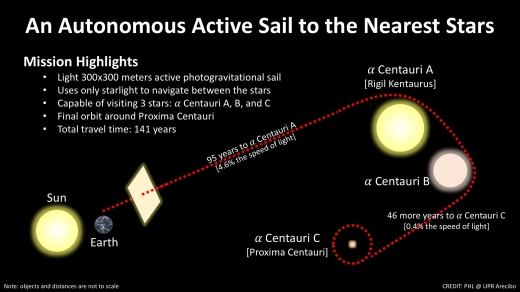 Image: An interstellar mission of an Autonomous Active Sail (AAS) to the nearest three stars. The sail uses an active reflective surface to change its direction and orientation from photogravitational assists from the stars, including the Sun. A light 90 grams sail could take nearly 100 years to reach Alpha Centauri A and another 46 years to Proxima Centauri. Many engineering challenges will need to be solved to pack enough communication and science instruments in such light but wide interstellar probes. Credit: PHL @ UPR Arecibo.

The paper points out that the maximum injection speed at Centauri A for a photogravitational assist to Centauri B and then Proxima depends on the mass-to-surface ratio of the sail, the idea being to maximize the photon force on the sail and yield the highest decelerations. But can even a graphene sail handle the conditions this one would be exposed to? Returning to the paper:

Close stellar encounters necessarily invoke the risk of impacts of high-energy particles and of thermal overheating. On the one hand, impacts of high-energy particles could damage the physical structure of the sail, its science instruments, its communication systems, or its navigational capacities. On the other hand, if those impacts could be effectively absorbed by the sail, they could even help to decelerate it. As shown in Section (3), heating from the stellar thermal radiation will not have a major effect on a highly reflective sail. However, the electron temperature of the solar corona is > 100,000 K at a distance of five solar radii. The Solar Probe Plus (planned launch in mid-2018) is expected to withstand these conditions for tens of hours (Fox et al. 2015), although the shielding technology for an interstellar sail would need to be entirely different (Hoang et al. 2016), possibly integrated into the highly reflective surface covering.

Also present is the issue of stellar alignments. Heller and Hippke’s analysis found that the optimal conditions for a photogravitational assist to work at Centauri A are when all three Centauri stars are in the same plane as the incoming sail, which minimizes the deflection angle required by the sail to reach the next star, while maximizing the injection speed for the first encounter (this, in turn, makes for the fastest possible travel time from Earth):

Proxima is not located in the orbital plane of the AB binary, but for a distant observer all three stars align about every 79.91 yr (the orbital period of the AB binary). From the perspective of an incoming probe from Earth, the alignment occurs near the time of the AB periastron, the next of which will take place on June 24, 2035 (Beech 2015).

Thus we can define a launch window involving the position of the Centauri stars. The next alignment comes in 2035, clearly out of reach to a probe with such long travel times, but there is another in 2115, likewise unreachable because we would have to launch in 2020 to take advantage of it. The 86 gram ‘fiducial’ sail analyzed by Heller and Hippke would thus have a launch window at the end of this century to make it to destination for the following alignment, though dropping to a 57 gram sail of equivalent size would allow faster travel times, and in some cases allow a launch within 25 years. Thus we have a bit of flexibility depending on advances in material sciences and lightsail technologies in the intervening years.

There is a good deal more to discuss, and rather than trying to cram everything into a single post, I want to go deeper into the photogravitational assist idea tomorrow, with renewed attention to the sail itself and in particular the question of navigation. We’ll also entertain an interesting thought — what would such a sail look like to any observers on Proxima b as it approached their star system?