If a terrestrial volcano erupts in molten rock, an ice volcano in the outer Solar System would presumably erupt with volatiles like water or ammonia. We have evidence of such things in places like Pluto and Triton, far beyond the snowline where water is abundant. Some scientists think Quaoar may have had cryovolcanic activity, and other candidates include Titan, Europa and Miranda. Which brings us to Ahuna Mons on the dwarf planet Ceres.

Discovered by the Dawn spacecraft in 2015, Ahuna Mons is unusual in many respects. Its sides are steep, its features well-defined, which suggests it is geologically young. If it is a cryovolcano, it seems to exist in splendid isolation, half the height of Mt. Everest on a surface otherwise bereft of similar features. Moreover, the orbit of Ceres between Mars and Jupiter gives us potential cryovolcanism closer to the Sun than has ever been observed before. 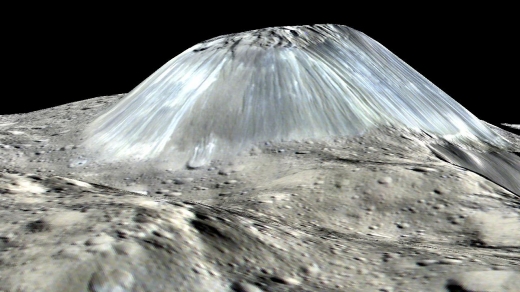 Image: Ahuna Mons seen in a simulated perspective view. The elevation has been exaggerated by a factor of two. The view was made using enhanced-color images from NASA’s Dawn mission. Credit: NASA.

Michael Sori (Lunar and Planetary Laboratory, University of Arizona) has a theory that just may explain Ahuna Mons’ peculiarities. As lead author of a new paper on the dwarf planet, Sori and colleagues have investigated the possibility that Ahuna Mons is simply the most recent of many cryovolcanoes that have formed on Ceres over millions of years, a young example of its type left alone as older ice volcanoes have gradually become deformed.

The heart of the hypothesis is viscous relaxation, the gradual flow of solids over time. We don’t see this with volcanoes on Earth because they are made of rock, but a high ice content could make a gradual flattening of a cryovolcano on Ceres possible. Given enough time, features like Ahuna Mons would effectively disappear from view, leaving no sign of their blocky structure. Ceres’ location relatively close to the Sun could accelerate the process. 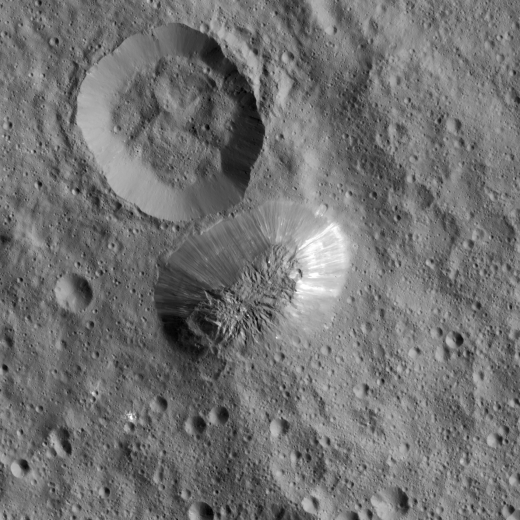 Image: Ceres’ mysterious mountain Ahuna Mons is seen in this mosaic of images from NASA’s Dawn spacecraft. Dawn took these images from 385 kilometers above the surface, in December 2015. The resolution of the image is 35 meters per pixel. Credit: NASA.

We know that viscous relaxation occurs on Earth — we see the process in the flow of glaciers. On Ceres, we would have to presume a structure that is ice rich, which is not true over the entire surface. In fact, Dawn has revealed a high population of craters in many areas that show the crust of the dwarf planet is not sufficiently ice-rich to smooth out the topography uniformly. But some areas of Ceres present a different picture. From the paper:

This observation is consistent with Dawn geophysical observations [Ermakov et al., 2016a; Fu et al. 2016; Park et al. 2016], which reveal that Ceres (whose bulk density suggests an ice-rock mixture) is only partially differentiated [Zolotov, 2009] into icy and rocky layers in contrast to some pre-Dawn predictions of complete differentiation [McCord and Sotin, 2005; Thomas et al., 2005; Castillo-Rogez and McCord, 2010; Castillo-Rogez, 2011]. However, while the crust on average must be <30% ice by volume to support topography [Fu et al., 2016], variation in crater morphology [Bland et al., 2016] and spectroscopic detection of localized H2O [Combe et al., 2016] indicate ice content is laterally heterogeneous. Localized regions or individual landforms may be sufficiently ice-rich for flow to occur [Schmidt et al., 2016] even if the crust as a whole is not.

Is Ahuna Mons one such place? Sori and team modeled the flow of the feature assuming different proportions of water in the constituent materials of the mountain. The modeling demonstrates that if Ahuna Mons is composed of more than 40 percent water ice, viscous relaxation could indeed be in play. This would allow a flattening of between 10 to 50 meters per million years, enough to render cryovolcanoes unrecognizable over geologic time.

There could, in other words, have been other features like Ahuna Mons, with the latter, no more than 200 million years old, still in the gradual process of flattening. To firm up the idea, it will be necessary to study the surface for evidence of the remnants of other cryovolcanoes. Testable predictions flow from the modeling:

Based on our results, we predict older cryovolcanoes have shallower slopes, and that cryovolcanoes at mid-latitudes have asymmetries between poleward and equatorward facing slopes. We do not expect extensive viscous relaxation of polar features. The detection of this distribution of features would add strong support to the hypothesis that Ceres undergoes ice-rich cryovolcanism, and flow models would constrain Cerean cryovolcanic history.

The idea seems reasonable, especially given the alternative, that Ahuna Mons is the only ice volcano that formed on a world otherwise without such activity. “Ahuna Mons is at most 200 million years old. It just hasn’t had time to deform,” says Sori. It will take painstaking scrutiny of the Cerean surface to see whether other dome-like features fit into this picture. Also fascinating: The comparison between putative cryovolcanoes here and on other small worlds.

The paper is Sori et al., “The vanishing cryovolcanoes of Ceres,” accepted for publication at Geophysical Research Letters.