I don’t want to get much deeper into February without looking at the recent Cassini imagery from Saturn’s rings. Cassini, after all, is a precious resource, and every day that passes brings us closer to its mission-ending plunge into Saturn’s cloud tops this September. Leading into that climactic event, however, we have the current ring-grazing orbits, a mission segment that is about half completed. Mission’s end gives us the chance to see the rings in exquisite detail.

20 orbits are involved in the ring-grazing phase, each diving past the outer edge of the main ring system, before things get even more dramatic, and the so-called ‘grand finale’ begins. The latter is to include 22 orbits that will take Cassini through the gap between the rings and Saturn itself, with the first plunge scheduled for April 26. The payoff is immense: We’ve never had views as close or as dramatic of small moons like Daphnis, seen in the image below. 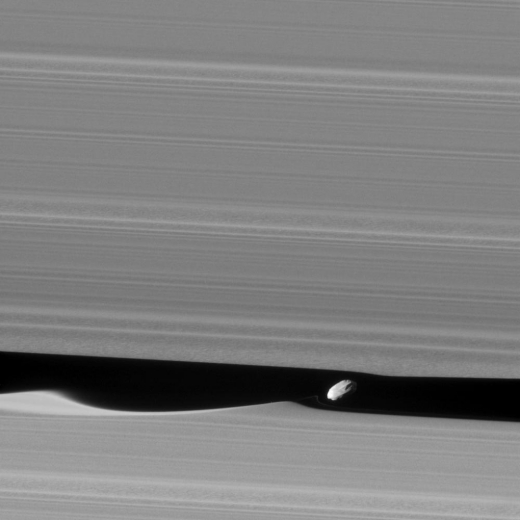 Image: The wavemaker moon, Daphnis, is featured in this view, taken as NASA’s Cassini spacecraft made one of its ring-grazing passes over the outer edges of Saturn’s rings on Jan. 16, 2017. This is the closest view of the small moon obtained yet. Daphnis (8 kilometers across) orbits within the 42-kilometer wide Keeler Gap. Cassini’s viewing angle causes the gap to appear narrower than it actually is, due to foreshortening. The little moon’s gravity raises waves in the edges of the gap in both the horizontal and vertical directions. Credit: NASA/JPL-Caltech/Space Science Institute.

The interactions between moon and ring are particularly interesting here. In several wide lanes in the ring, we seem to be seeing structures where particles have clumped together, marked by their grainy texture. At the left of the moon as seen in the image, the edge of the Keeler Gap appears softened, which scientists speculate is due to the movement of ring particles into the gap after Daphnis’ most recent approach on the orbit before this one.

When Cassini arrived at Saturn back in 2004, we also were able to work with a high level of ring detail, seeing features called ‘straw’ and ‘propellers’ that were the result of ring particles clumping and interactions with embedded, tiny moons. I had to go back and look at my notes on this — Cassini, as noted in this JPL news release, actually closed to an even tighter distance from the rings during the Saturn arrival, but the imagery it sent back was not as good because of the need to use short exposure times to avoid smearing due to the spacecraft’s motion over the ring plane.

The current views are taken in both the backlit and sunlit side of the rings, and we have dozens of passes to work with as the mission nears its terminus. Carolyn Porco (Space Science Institute, Boulder CO) is imaging team lead:

“As the person who planned those initial orbit-insertion ring images — which remained our most detailed views of the rings for the past 13 years — I am taken aback by how vastly improved are the details in this new collection. How fitting it is that we should go out with the best views of Saturn’s rings we’ve ever collected.” 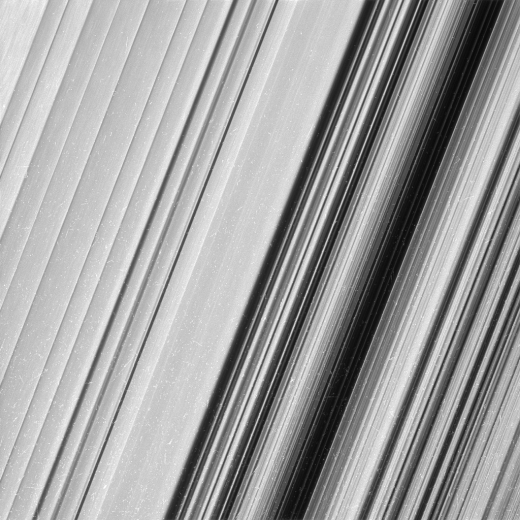 Image: This image shows a region in Saturn’s outer B ring. NASA’s Cassini spacecraft viewed this area at a level of detail twice as high as it had ever been observed before. And from this view, it is clear that there are still finer details to uncover. Researchers have yet to determine what generated the rich structure seen in this view, but they hope detailed images like this will help them unravel the mystery. In order to preserve the finest details, this image has not been processed to remove the many small bright blemishes, which are created by cosmic rays and charged particle radiation near the planet. Credit: NASA/JPL-Caltech/Space Science Institute.

The image below, also only lightly processed, was taken in visible light with Cassini’s wide-angle camera on December 18, 2016. Here we’re looking at a distance of approximately 56,000 kilometers, with an image scale of about 340 meters per pixel. 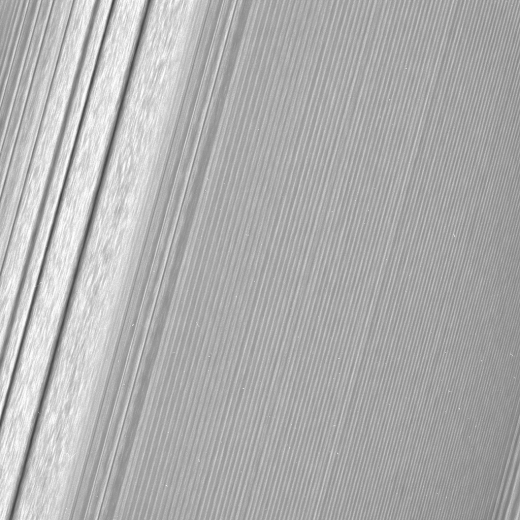 Image: This Cassini image features a density wave in Saturn’s A ring (at left) that lies around 134,500 km from Saturn. Density waves are accumulations of particles at certain distances from the planet. This feature is filled with clumpy perturbations, which researchers informally refer to as “straw.” The wave itself is created by the gravity of the moons Janus and Epimetheus, which share the same orbit around Saturn. Elsewhere, the scene is dominated by “wakes” from a recent pass of the ring moon Pan. Credit: NASA/JPL-Caltech/Space Science Institute.

On a personal note, Cassini was much in my thoughts during its final insertion into Saturn’s orbit, which it entered on July 1, 2004. During the approach to the planet, all I could think about was that we were trying to put a spacecraft through a gap between two of Saturn’s rings — the F and G rings — using a complicated maneuver that involved spacecraft rotation to shield its instrumentation from ring particles followed by a decelerating engine burn. 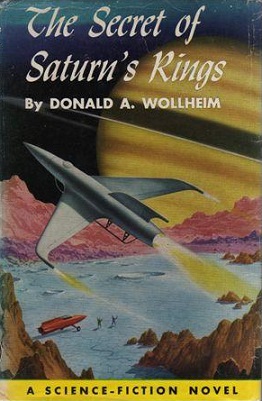 Actually crossing Saturn’s ring plane to do this seemed like science fiction come to life. At the same time that year, I was working on getting Centauri Dreams up and running, trying to figure out the software and making choices about hosting providers, all the stuff people do when they’re trying to create an online publication. For me, the Cassini arrival and Centauri Dreams will always be inextricably linked.

Also linked: Donald Wollheim’s 1954 novel The Secret of Saturn’s Rings, one of the Winston juveniles that many of us absorbed as space-struck kids. I have a suspicion that at least a few of those now working Cassini’s ring passage have a happy memory of this title. I hadn’t recalled the book in decades, but these ring-crossing orbits brought it all back. Nice Alex Schomburg cover!

Next post: A New Look at Habitability around Red Dwarf Stars