Tightening the Parameters for Centauri A and B

When it comes to the nearest stars, our focus of late has been on Proxima Centauri and its intriguing planet. But of course the work on Centauri A and B continues at a good clip. The prospects in this system are enticing — a G-class star like our own, a K-class dwarf likewise capable of hosting planets, and the red dwarf Proxima a scant 15000 AU away. Project Blue examines how we might image planets here as our radial velocity studies proceed.

But we have much to learn, and not just about possible planets. A new paper by Pierre Kervella (Observatoire de Paris), working with Lionel Bigot and Fréderic Thévenin (both at the Observatoire de la Cote d’Azur), reminds us of the importance of firming up our stellar data.

We need to learn as much as possible about Centauri A and B not just because we’d like to find planets there but also because the work has implications for space missions, including the ESA’s Gaia, which will tighten our distance measurements to many stars. The Alpha Centauri stars are important benchmarks for Gaia, putting the emphasis on an accurate calibration of the basic stellar parameters in this system.

Image: The Alpha Centauri stars in comparison to our Sun and other Solar System objects. Credit: Pierre Kervella.

Kervella and team have used new observations of Centauri A and B with the Very Large Telescope Interferometer equipped with the PIONIER (Precision Integrated Optics Near-infrared Imaging ExpeRiment) beam combiner to operate in the near infrared. Their paper reports on improved measurements of both stars’ angular diameters in relation to the phenomenon known as limb darkening. The latter results point to the need to improve our models as we study the photospheres of stars including our own Sun.

Limb darkening refers to the gradual decrease in brightness that we see as we look away from the center of a star toward its outer edge, or limb. Have a look at the image below to see the effect, which is easily visible in photographs of the Sun. When we look at the center of the Sun’s disk, we see the greatest light emission because we are viewing the deepest, and hottest layers, while at the limb, we are seeing only cooler layers that produce less light.

The phenomenon is important because we can use it to study how a star’s atmosphere is structured, but it turns up as a factor in everything from eclipsing binary stars to gravitational microlensing. Moreover, limb darkening will affect the shape of the transit curve produced by a planet moving in front of its star. The planet blocks a smaller part of the star’s light when it is near the limb, and a greater fraction as it moves toward the center of the star. The center of a transit, in other words, is always going to be deeper than the edges, something that would not happen if a star had a uniform brightness (there the transit ‘curve’ would appear flat). 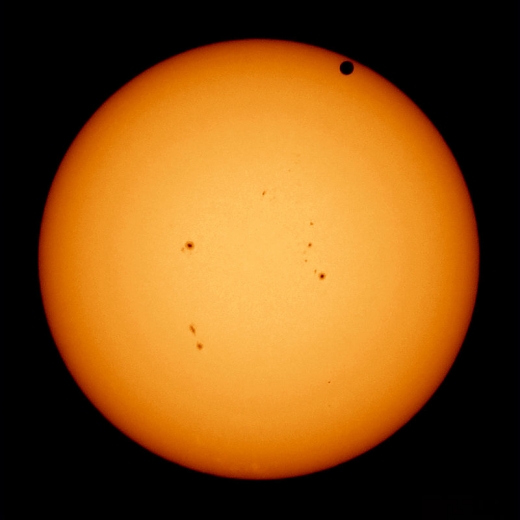 Image: A filtered image of the Sun in visible light, showing the limb-darkening effect as a dimmer luminosity towards the edge or limb of the solar disk. The image was taken during the 2012 transit of Venus (seen here as the dark spot at the upper right). Credit: Brocken Inaglory / Wikimedia Commons.

What the researchers find is that there is a discrepancy between the measured limb darkening parameters and the models previously discussed in the literature — these overestimate limb darkening for both Centauri A and B. While the difference is small and does not affect the team’s measurements of the stars’ angular diameter, the limb darkening models need adjustment, a problem that is not limited to Alpha Centauri. From the paper:

This implies that the underlying atmosphere models deviate from the real intensity profiles of α Cen, and we note that similar discrepancies are observed on the Sun. The observed discrepancies indicate that the predictive accuracy of the current generation of model atmospheres may be significantly lower than expected. This is likely to be more critically the case for stars with parameters that are very different from those of the Sun (e.g., cooler stars with molecular envelopes) and for wavelength regions more complex to model than the near-infrared (e.g., the ultraviolet and visible).

Our interest in cooler stars like Proxima Centauri, and the useful transit depths that could be observed with exoplanets around nearby red dwarfs mean we need as accurate a limb darkening model as possible in order to measure their transits precisely. These observations for Centauri A and B also offer us benchmarks we can use to firm up our atmospheric models for more distant stars. 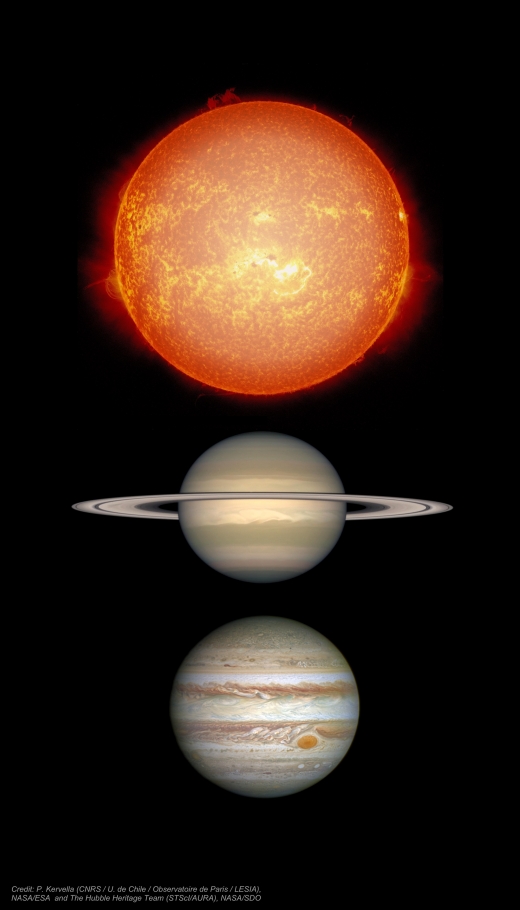 Image: Proxima Centauri in relation to familiar objects in our own system. Credit: Pierre Kervella.

The paper is Kervella, Bigot and Thévenin “The radii and limb darkenings of α Centauri A and B: Interferometric measurements with VLTI/PIONIER,” Astronomy & Astrophysics 597, A137 (2017). Abstract / preprint.