With an ocean containing twice as much water as Earth’s oceans, Europa is a high-priority target for astrobiology. But the presence of water alone is not what gives the Jovian moon such interest. After all, we’re learning that icy worlds beyond the snowline can feature oceans beneath the surface, and we’re learning more all the time about oceans all the way into the Kuiper Belt, as the ongoing investigation into what lies beneath Pluto continues.

But Europa, like Enceladus, offers us substantial water in direct contact with a rocky seafloor, and that’s a telling circumstance. What excites astrobiologists is water in the presence of the organic compounds that can become components of biology. The third factor is energy, which Europa has in abundance thanks to the tidal pull of Jupiter, causing flexing of the seafloor that may well be driving hydrothermal activity. Chemical compounds produced from interactions with Jupiter’s magnetic field may also be useful as an energy source.

In June of 2016, NASA’s Planetary Science Division began an early study into a Europa lander. Having a lander here is an exciting thought because study of Europa’s surface shows the periodic breakthrough of oceanic materials that then re-freeze, icy plates that spread apart during this process and so-called ‘chaos’ terrain that may contain frozen material from the interior. A lander here could tell us much about what lies under Europa’s frozen crust.

Image: Enhanced-color image mosaic from Galileo showing crosscutting lineae, multiple wide, dark bands where the surface has spread apart (right), and chaos regions (left) where the surface has been disrupted into blocks of material. Image is approximately 200 km wide. Solar illumination is from the upper left. Credit: Figure 1.1 of the SDT report.

The Europa lander work is in its infancy. This is a Science Definition Team report that, as this JPL news release explains, is a routine part of any mission, used to work out the feasibility and scientific value of the concept. The team’s report, involving 21 scientists, was submitted to NASA on February 7. Its goals: To characterize the surface and subsurface of the Jovian moon, supporting future robotic exploration; to assess the habitability of the moon by analyzing its surface; and — the primary goal — to search for evidence of life.

We haven’t developed a full-blown life detection strategy since the days of the Viking landers on Mars, so it’s heartening to see the emergence of a document that makes recommendations on the scientific instruments required and analyzes the systems needed for landing here. We need to get a payload onto the surface without benefit of heat shields or parachutes, given the lack of an atmosphere, and it’s hard to see how this could be done with missions like the current multiple flyby mission scheduled for launch in the 2020s.

That mission is separate from the concept lander now being considered, but it gives food for thought. Flybys, of which the former mission includes at least 45, will be profoundly useful in imaging the moon’s surface at high resolution and investigating its composition. But multiple high-speed flybys make it challenging to slow a lander for safe arrival on the surface. The lander report, therefore, takes a different route, using gravity assists within the Jovian system — at Callisto and Ganymede — to reduce velocity relative to Europa. From the report:

The first Europa gravity assist would mark the beginning of the final mission phase before landing, and the spacecraft would now be exposed to much higher daily radiation doses than before. The first Europa gravity assist would be designed to insert the spacecraft into a Europa-resonant orbit, and ΔV-leveraging maneuvers would further reduce the spacecraft’s velocity relative to Europa (Campagnola and Russell, 2010). This velocity reduction would make the low-energy (or three-body) regime accessible to the spacecraft, in which the gravitational interplay of Europa and Jupiter would enable the carrier to reside in the vicinity of Europa for the full duration of the surface mission. This final part of the tour trajectory, from first Europa flyby to landing, would take approximately one month and would set up the lander delivery to a 5 km periapsis altitude at a target state relative to the landing site. 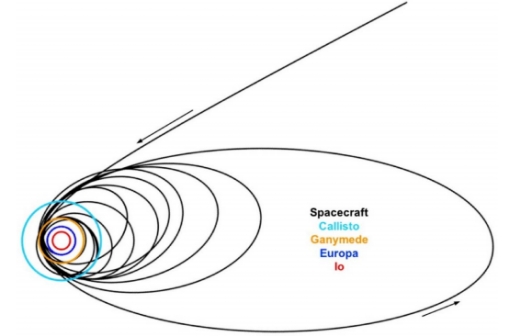 After that, we have deorbit and landing, as pictured below. 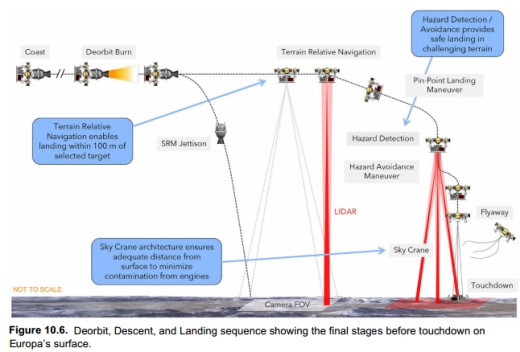 The Europa lander report will be discussed at two upcoming meetings designed to get feedback from the scientific community. The first, on March 19, occurs at the 2017 Lunar and Planetary Science Conference in Texas. The second, on April 23, will take place at the Astrobiology Science Conference (AbSciCon) in Arizona. As early in the game as this is, The Europa Lander Study 2016 Report (JPL D-97667) makes for absorbing reading, and I recommend downloading and reading it on a tablet for convenience.