A KBO-like Object around another Star?

We’re beginning to find evidence of objects like those in the Kuiper Belt beyond our own solar system. In this case, the work involves a white dwarf whose atmosphere has been recently polluted by an infalling object, giving us valuable data on the object’s composition. The work involves the white dwarf WD 1425+540, whose atmosphere has been found to contain carbon, nitrogen, oxygen and hydrogen. The findings are unusual because white dwarfs are the dense remnants of normal stars, with gravitational fields strong enough to pull elements like these out of their atmospheres and into their interiors, where they are immune from detection by our instruments. And that implies a relatively recent origin for these elements.

Lead author Siyi Xu (European Southern Observatory) and team worked with spectroscopic observations from HIRES (the High Resolution Echelle Spectrometer) on the Keck Telescope and included data from the Hubble instrument. The researchers believe the white dwarf’s atmosphere has been enriched by the breakup and eventual spiral into the star of a minor planet, whose composition mimics what we find in Kuiper Belt objects. WD 1425+540, some 200 light years away in the constellation Boötes, thus absorbed a body that is calculated to have been composed of 30 percent water and other ices and 70 percent rocky material.

The event, which would have involved the gravitational disruption of the object’s orbit, causing its infall, disintegration and the eventual absorption of its elements by the star, may have occurred as recently as 100,000 years ago. We could be seeing a process that has implications for the existence of life on planets in the inner system like our own. The Earth may well have been dry when it first formed, with life’s building blocks delivered as the result of collisions with other objects. Siyi Xu sees this as a process that can occur anywhere: 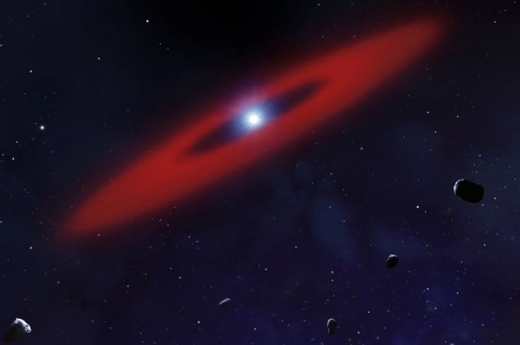 Image: Rendering of a white dwarf star (bright white spot), with rocky debris from former asteroids or a minor planet that has been broken apart by gravity (red rings). Credit: University of Warwick.

Temperatures in the protoplanetary disk of our own system are thought to have determined the distribution of water, with dry rocky worlds inside the snow line, and water ice available beyond it, much of it still to be found in asteroids, comets and Kuiper Belt objects. Nitrogen ice can also be found in comets from the outer regions of the Kuiper Belt and in the Oort Cloud. The assumption has been that similar conditions prevailed around other stars, but our knowledge of analogs to Kuiper Belt objects in other systems has remained scant.

This makes white dwarfs like WD 1425+540 a useful tool, for the detection of heavy elements in their atmosphere has to point to an external source, giving us a way to measure the broad composition of objects in the system. And indeed, the paper notes that there are at least a dozen ‘polluted’ white dwarfs whose accreted material has been measured in detail. Excess oxygen that can be attributed to water-rich objects has been detected in only three.

The accreting material observed in WD 1425+540 provides direct evidence for the presence of KBO analogs around stars other than the Sun. In addition, WD 1425+540 has a K dwarf companion at 40.0 arcsec (2240 au) away (Wegner 1981). The presence of a distant stellar companion can impact the stability of extended planetary systems and, thus, enhance the chances of perturbing objects – that initially orbit far from a white dwarf – into its tidal radius via the Kozai-Lidov mechanism (Zuckerman 2014; Bonsor & Veras 2015; Naoz 2016).

Interestingly, the authors have worked parameters for the disrupted object in the system. When it was on the main sequence, WD 1425+540 would have been about twice as massive as the Sun and 10 times more luminous. Its nitrogen-bearing KBO analogs would have been found at about 120 AU, or three times further from the star than the Sun’s Kuiper Belt objects. Add in the star’s red giant phase and its Kuiper Belt moves out by a factor of 3. Thus the object that was accreted by WD 1425+540 likely orbited beyond 300 AU before experiencing the gravitational disruption that drove it inward toward the star and its eventual destruction.

Most material accreted onto white dwarfs in previous studies of polluted atmospheres has come from dry minor planets. This paper argues that the spectroscopic work on WD 1425+540 gives us strong evidence for volatile-rich planetesimals around other stars:

With this new dataset, we can conclude that extrasolar terrestrial planets could have volatile element and water abundances provided by KBO analogs that are comparable to those on Earth.