It’s no surprise that planets can affect the stars they orbit. We’ve used that fact for several decades now, relying on radial velocity studies that showed the movement of a star toward us and then away again as it was tugged on by the planet under investigation. But now we’re hearing about another kind of planetary effect, one whose future uses may be intriguing. We’re seeing a star’s brightness change in evident synchrony with a planetary orbit.

The star is some 370 light years away from the Earth. The planet in question is HAT-P-2b, a ‘hot Jupiter’ in a highly elliptical orbit that makes its closest approach to the star every 5.6 days. The planet, discovered by the automated HATNet project (Hungarian Automated Telescope Network), is about 8 times Jupiter’s mass. The temperature changes its orbit should induce in its atmosphere led indirectly to the brightness discovery, for researchers led by Julien de Wit (MIT) wanted to learn about the circulation of energy in the planet’s atmosphere, causing them to turn to the Spitzer infrared telescope for data.

The dataset de Wit and colleagues consulted contained some 350 hours of observation between July of 2011 and November of 2015. The planet’s passage close to and then behind the star as seen from Earth was the key window of interest, as changes to the star’s brightness can reveal how much energy it is delivering to the planet. The method has been used with success before on planets like HD 149026b, likewise studied with Spitzer data.

What the researchers found was a bit of a surprise. When the planet passed behind the star, oscillations in the star’s light with a period of 87 minutes became visible. The signals were tiny — de Wit compares them to the sound of a mosquito next to a jet engine — but they demanded attention because their period was an exact multiple of the planet’s orbital frequency.

The paper recounts the team’s exhaustive analysis of possible effects in the Spitzer instrument itself, and explains why the only conclusion they could reach was that this was a stellar, not an instrumental, effect. Bear in mind that while HAT-P-2b is a massive planet, it is dwarfed by its host star, which is more than 100 times more massive. A pulsation effect at this scale seems unusual, showing how much we have to learn about planet/star interactions.

“This is really exciting because, if our interpretations are correct, it tells us that planets can have a significant impact on physical phenomena operating in their host-stars,” says co-author Victoria Antoci, a postdoc at Aarhus University in Denmark. “In other words, the star ‘knows’ about its planet and reacts to its presence.” 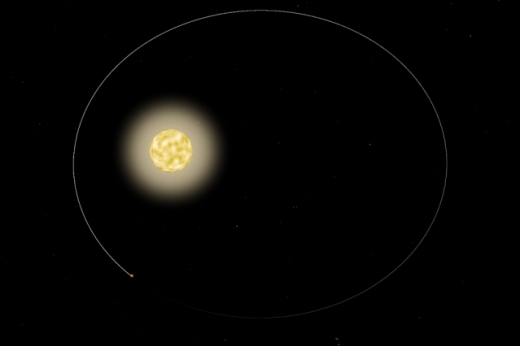 Image: For the first time, astronomers have observed a star pulsing in response to its orbiting planet. The star, HAT-P-2, pictured, tracks its star in a highly eccentric orbit, flying extremely close to and around the star, then hurtling far out before eventually circling back around. Credit: NASA (edited by MIT News).

The find is interesting indeed, but fraught with issues. For one thing, pulsations on a star are far from unusual. Could what de Wit and company observed simply be a natural phenomenon unrelated to the planet? The answer is almost certainly no, because the oscillations are only observed during the planetary occultations, and the correspondence between the pulsations and the planet’s orbital frequency implies a strong connection between the two.

Pulsations caused by tidal effects have been seen before in binary star systems (these are known as ‘heartbeat’ stars), and the researchers turn to tidal effects as an explanation. From the paper:

The photometric observations also show no sign of orbit-to-orbit variability nor of orbital evolution but reveals high-frequency low-amplitude stellar pulsations that correspond to harmonics of the planet’s orbital frequency, supporting their tidal origin.

But the explanation only goes so far:

Current stellar models are however unable to reproduce these pulsations. HAT-P-2’s RV [radial velocity] measurements exhibit a high level of jitter and support the orbital evolution of HAT-P- 2 b inconsistent with the ultra-precise eclipse times. The inability of current stellar models to reproduce the observed pulsations and the exotic behavior of HAT-P-2’s RV indicate that additional observations and theoretical developments are required to understand the processes at play in this system.

We have, in other words, to gather more data, presumably through future missions like TESS, PLATO and CHEOPS, to understand these intriguing interactions. The star’s pulsations are the tiniest variations of light from any source that Spitzer has ever measured. But on a broader front, are we seeing the development of a new kind of exoplanet discovery tool, one that would work regardless of the orbital inclination of an undetected planet? The paper speculates on the possibility, noting that such detections could flag stars that we would then want to submit to examination with direct imaging and radial velocity techniques.