I’m always interested in ways readers can dig directly into data from our telescopes, and this morning I can point to two. I’ll begin with the Lick Carnegie Exoplanet Survey, which has just released 60,949 precision Doppler velocities for 1,624 stars. The data draw on observations using HIRES (the High Resolution Echelle Spectrometer) on the Keck 1 telescope on Mauna Kea (Hawaii). As exoplanet hunter Greg Laughlin (UC-Santa Cruz) explains on his systemic site, the data contain hundreds of possibly planetary signals.

If you’d like to dig into this material, which includes hints of a super-Earth around the fourth closest star to the Sun (Lalande 21185), I’ll remind you of Stefano Meschiari’s Systemic Console, developed with Laughlin as a way of exploring exoplanetary data. The latest version completely reworks the older Console and provides the tools needed to study the Lick Carnegie material. Versions of this open source software are available here, and a visit to the Earthbound Planet Search website will yield links to the Lick Carnegie data release.

As to the stars under examination, they are primarily the nearest and brightest F, G, K and M-class stars visible from Mauna Kea. All are within 100 parsecs (326 light years), though some include a relatively short range of data, while others offer a deeper dataset. Accompanying the data release is an upcoming paper, “The LCES HIRES/Keck Precision Radial Velocity Exoplanet Survey,” slated for publication at The Astronomical Journal (preprint available).

Discussing the data release on systemic, Laughlin noted an interesting fact as he placed the Lick Carnegie work in context:

…as the breakthroughs rolled in, the Keck I Telescope was gradually accumulating Doppler measurements of hundreds of nearby Sun-like stars with HD designations and magnitudes measured in the sevens and eights. This data is as important for what it shows (scores of planets) as for what it doesn’t show (a profusion of planets with Jupiter-like masses and orbits). There are several reasons why our Solar System is unusual, and Jupiter is one of them. 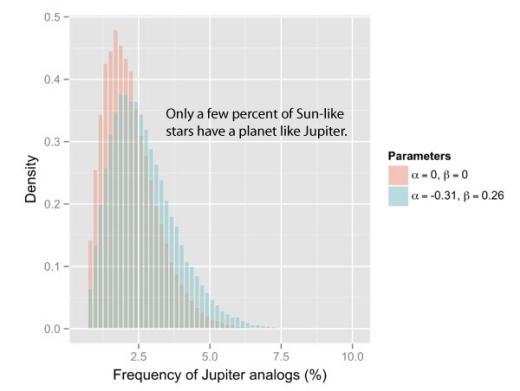 Just how unique is our Solar System? It’s an intriguing question to keep in mind, and one that provides additional motivation for digging into the data in classrooms and in the home. Laughlin has spoken before about ‘democratizing’ the search for planets, which is all about making not just the data but the software tools available for trying out possible planetary orbits that would explain what we’re seeing. Expect much more as this dataset is examined.

NASA’s Wide-field Infrared Survey Explorer (WISE) mission captured a lot of attention in these pages as it scanned the entire sky between 2010 and 2011. Although its primary mission ended in 2011, WISE was reactivated in 2013 with the charter of finding near-Earth objects that could be potentially hazardous. The latter mission was named the Near-Earth Object Wide-field Infrared Survey Explorer (NEOWISE).

A lot of us were keeping an eye on M-class dwarfs and, especially, brown dwarfs, wondering whether a dim object might not exist much closer to the Earth than the Alpha Centauri stars. If WISE had found something like this, it would have given us a much closer target for an interstellar mission, but no such target has yet emerged. Even so, we’re not quite through with the WISE data. There may be brown dwarfs waiting to be found therein, not to mention distant objects in our own Solar System including, if it exists, the as yet undetected Planet Nine. 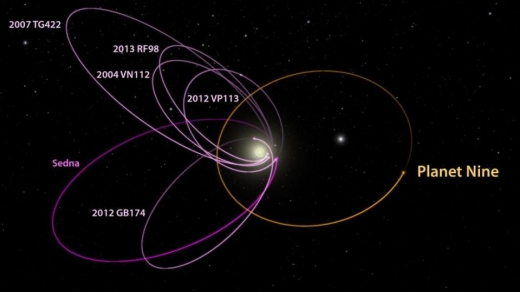 Image: This diagram shows the orbits of several Kuiper Belt objects that were used to infer the existence of Planet 9. If it exists, Planet 9 may reveal itself in WISE infrared images. Credit: ASU.

Making such finds now comes down to looking for moving objects in WISE images, an effort in which human eyes have a role to play, because computers can trip over image artifacts in crowded parts of the sky. Thus we get Backyard Worlds: Planet 9, a new website that puts computer users — citizen scientists — to work doing what Clyde Tombaugh did in the search for Pluto, studying imagery to pick out the moving object while disregarding the artifacts.

The site works through ‘flipbooks’ — brief animations that show the changes in small parts of the sky over time. Objects spotted by sharp-eyed observers will be prioritized for future investigation. The image below illustrates the process with a real WISE discovery.

Image: Previously known brown dwarf WISE 0855-0714 is seen here in this Backyard World flipbook as a moving orange dot at upper left. Citizen scientists will be asked to inspect images just like this to search for new objects in the solar neighborhood. Credit: NASA.

Working in the infrared, WISE produced data on nearly 750 million individual sources in the sky, working at infrared wavelengths that could reveal objects emitting at low temperatures. In other words, there’s plenty of work here for those patient enough to study these images. “There are just over four light-years between Neptune and Proxima Centauri, the nearest star, and much of this vast territory is unexplored,” said the lead researcher for Backyard Worlds: Planet 9, Marc Kuchner, an astrophysicist at NASA’s Goddard Space Flight Center.

Bringing the human ability to spot movement against a fixed background, and bringing in large numbers of volunteers to work the project, allows all of us to get involved with these ongoing investigations. Can we find what the computers have missed amidst the virtual noise?