Registration is now open for the 2017 Tennessee Valley Interstellar Workshop, which will be held in Huntsville, AL on October 4-6. The title for this year’s conference is “Step By Step: Building a Ladder to the Stars.” The registration page is here, and if you’re thinking of attending, I recommend registering right away, as spaces filled up swiftly the last time around. This year’s TVIW will take place in partnership with the Tau Zero Foundation as well as Starship Century, which has already produced two successful symposia of its own.

Despite its regional name, the Tennessee Valley Interstellar Workshop has become a well received forum for interstellar discussions on a global scale, with speakers and workshop participants well known to Centauri Dreams readers. Registration at this year’s event costs $175, with discounts available for students. Pre-symposium seminars for an additional fee are to be held on Tuesday October 3. This year’s topics are Conflict in Space; Laser Propulsion: An Introduction to Laser Propulsion and Assessment of Relevant Current Technologies; and Human Life in Space – Separating Reality from Wishful Thinking.

I’ve been pleased to attend all of the previous symposia except the last one, which I had to miss because of an untimely bout of the flu. The recent call for papers jogged me into getting my registration in early, as I don’t want to miss two in a row. The text below is taken directly from the submissions page on the TVIW site:

TVIW 2017 Call for Papers, Workshop Tracks, and Posters: The Tennessee Valley Interstellar Workshop (TVIW), in collaboration with Starship Century and Tau Zero Foundation, hereby invites participation in its 2017 Symposium to be held from Wednesday, October 4 through Friday, October 6, 2017, in Huntsville, Alabama. Our Program Committee is seeking proposals for Plenary Papers/Talks, Working Tracks, and Sagan Meetings as well as other content such as posters.

Plenary Papers include traditional papers, lectures, and presentations that will be selected from submitted abstracts. See Appendix 1 for details and abstract submission guidelines.

Working Tracks are collaborative, small group discussions around a set of interdisciplinary questions on an interstellar subject. See Appendix 2 for details and abstract submission guidelines.

Sagan Meetings are new for TVIW 2017. Carl Sagan famously employed this format for his 1971 conference at the Byurakan Observatory in old Soviet Armenia, which dealt with the Drake Equation. Each Sagan Meeting will invite five speakers to give a short presentation staking out a position on a particular question. These speakers will then form a panel to engage in a lively discussion with the audience on that topic.

Invited Talks are presentations that contain significant results or describe major activities in the field and will be solicited by sponsoring organizations or the conference organizers.

Discussion Groups are for those not participating in the working tracks or Sagan Meetings and offer opportunities for free form discussion of subjects of mutual interest to attendees. They are unstructured and no specific output is expected although it is hoped that these groups might generate teams and/or topics that would lead to future Working Tracks and possible collaborative efforts in the interstellar field. Coffee, pen, and paper will be provided. An expanded list of possible topics will be available each day of the Symposium and anyone wishing to propose a topic is free to do so. Contact David Fields (fieldsde@tviw.us) to suggest topics.

Other Content includes, but is not limited to, posters, displays of art or models, demonstrations, panel discussions, interviews, or public outreach events. Please refer to Appendix 1 for more information and the abstract submission guidelines.

Full information on formats and other structural matters can be found on the Submissions page. If you’re wondering about ‘working tracks,’ TVIW has used these in the past to engage up to four parallel tracks on issues of interstellar import, such as mission targets, propulsion systems, life support and the human factors needed for interstellar exploration. Each working track will be allocated two-hour blocks each day. Proposals for working tracks are still open, with the letter of intent deadline coming up on March 3, and deadline for complete proposals on March 31. TVIW hopes to have four to six working tracks in the 2017 symposium.

I notice that Andrew Siemion (UC-Berkeley), who serves as director of the UC Berkeley Center for the Search for Extraterrestrial Intelligence (SETI) will be speaking in Huntsville. Siemion is also one of the leaders of the Breakthrough Listen Initiative, which under the aegis of the Breakthrough Prize Foundation is conducting the most sensitive search yet for signs of extraterrestrial technology. At TVIW 2017, Siemion will be discussing “The Search for Ourselves Among the Stars,” a look at the past, present and future of SETI activities.

I’ve also recently heard from Kelvin Long, who heads up the Initiative for Interstellar Studies, about a workshop to be held at City Tech, CUNY in New York from June 13-15. The group’s goal is “facilitating real progress on existing problems related to interstellar studies.” This year’s session is to have a propulsion focus, but according to the workshop’s web page, the focus will change with successive meetings as issues arise and concepts change. 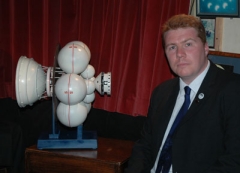 Here is the group’s overview of the event:

At the start of this new millennium we are faced with one of the greatest challenges of our age Can we cross the vast distances of space to visit other worlds around other stars? At the end of the last century the idea of interstellar travel was considered one of science fiction. In recent times that has changed and interstellar flight has received much interest. This is particularly since the discovery of many planets outside of our Solar System around other stars. Indeed, we now know that an Earth sizes mass planet orbits one of our closest stars, Proxima b. In addition, national space agencies and private commercial industry are beginning to turn their attention to the planets and beyond. It is time to start considering the bold interstellar journey and how we might accomplish it. Yet, this challenge presents many difficult problems to solve and who better to address them than the global physics community.

The Institute For Interstellar Studies (I4IS) and the Center for Theoretical Physics (CTP) at City Tech have partnered to bring together some of the best minds in the fields of physics to address some of the fundamental problems associated with becoming an interstellar capable civilisation.

The first day of the workshop is devoted to ‘energetic reaction engines,’ i.e., engines that involve the ejection of matter or energy rearward from the vehicle to generate thrust. This could be electric, plasma, nuclear thermal, fission, fission-fragment, fusion, antimatter catalyzed fusion, antimatter. Day 2 focuses on sails and beamed energy via photons or particle beams, covering laser sails, microwave sails, particle beamers, stellar wind pushers. Day 3 is given over to breakthrough propulsion topics, “an area of technology development that seeks to explore and develop a deeper understanding of the nature of space-time, gravitation, inertial frames, quantum vacuum, and other fundamental physical phenomena.”

Harold ‘Sonny’ White is to chair day 3 of the workshop, with Kelvin Long taking day 1 and CUNY’s Roman Kezerashvili taking day 2. White’s presence will give the opportunity for those interested in his latest EmDrive work to learn and ask questions. I haven’t seen him since we ate cheeseburgers sitting around the swimming pool at the Dallas Starship Congress meeting some years back. I’ve enjoyed being at several conferences with Kelvin, and remember Roman Kezerashvili from the Aosta conference in Italy where I first met him. He’s a rigorous scholar and an engaging conversationalist. It will be interesting to see how this crew finalizes the lineup of presentations for the upcoming event.

Submissions to the workshop are open, and those accepted are to appear in the Journal of the British Interplanetary Society. On the nature of submissions, the group says this:

All submissions should be attempted solutions of existing problems, or at least a strong discussion on the pathway towards a solution. This is a working meeting and audience participation and discussion should be expected in any results. The rule for the workshop is “no solution, no presentation”. Some spaces will be reserved for ‘special observer status’ participation.