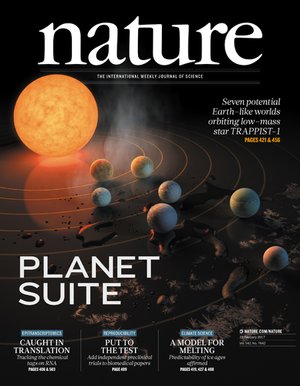 In yesterday’s news conference on the seven planets around TRAPPIST-1, exoplanet scientist Sara Seager (MIT) pointed to the discovery as accelerating our search for habitable worlds. “Goldilocks,” Seager said in a finely chosen turn of phrase, “has many sisters in this system.” I think she’s exactly correct, even though we don’t yet know if any of these particular worlds house life. For as Seager went on to point out, we now need to study the atmospheres of these planets to find out what’s really going on, especially on potentially habitable TRAPPIST-1e, f and g.

Seager’s enthusiasm for TRAPPIST-1 is based on the fact that, whatever we eventually learn about its planets, we’re seeing such an abundance of possibilities here that similar, possibly life-bearing systems are doubtless commonplace. And with this system, we have transiting worlds in the solar neighborhood whose atmospheres can be analyzed by upcoming missions like the James Webb Space Telescope, or via installations on the ground like the soon to be available European Extremely Large Telescope. We’re swiftly moving to a place where the active search for biosignatures in distant atmospheres becomes a regular activity. 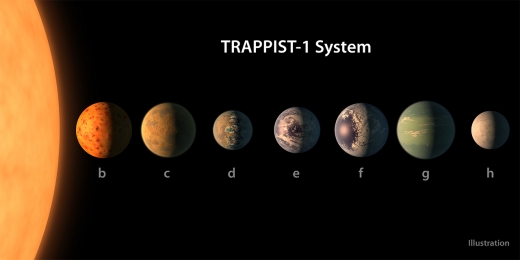 Image: This artist’s concept shows what the TRAPPIST-1 planetary system may look like, based on available data about the planets’ diameters, masses and distances from the host star. Credit: NASA-JPL/Caltech.

Those atmospheres, of course, are a cause of concern when planets are in such proximity to a young star. Yesterday I pointed to a paper, one of whose co-authors was Michaël Gillon (STAR Institute, University of Liège), a key player in all of the TRAPPIST-1 planetary findings. Noting the opportunity these planets present for atmospheric analysis, the authors discussed the X-ray and ultraviolet radiation that could damage planetary atmospheres. I notice that Lisa Kaltenegger (director of the Carl Sagan Institute at Cornell), shares radiation concerns.

Kaltenegger has already homed in on the problem with two papers currently in the works on how life would fare in a high ultraviolet radiation flux environment. Her take:

“How good or bad would such a UV environment be for life? Our paper, currently under review at Monthly Notices of the Royal Society, discusses just this scenario for the Trappist-1 system, examining the consequences of different atmospheres for life in a UV environment. We find that if the star is active, as indicated by the X-ray flux, then planets need an ozone layer to shield their surface from the harsh UV that would sterilize the surface. If the planets around Trappist-1 do not have an ozone layer (like a young Earth), life would need to shelter underground or in an ocean to survive and/or develop strategies to shield itself from the UV, such as biofluorescence.”

Notice that Kaltenegger is not ruling out life even under strong radiation constraints. We know from our own world how adaptable life can be, and we can’t rule out the possibility that even a young flare star could serve as an evolutionary spur to forms of adaptation and protection. We also know nothing of possible magnetic fields on these worlds. So I come back to Seager’s point: We now need to study these atmospheres to go beyond theory to observation.

About the worlds themselves, I noticed in the paper that Michaël Gillon and colleagues wrote for Nature that the planetary orbital inclinations found at TRAPPIST-1 are all very close to 90°, which tells us we’re looking at a system that is ‘dramatically co-planar,’ and we’re seeing it nearly edge-on. What a spectacular opportunity this gives us. The authors tell us that the six inner planets are moving in resonance with each other, which can be deduced from transit timing variations (TTVs). This is of more than theoretical interest because it goes to the origin of these planets, and hence to their possible composition. From the paper:

Orbital resonances are naturally generated when multiple planets interact within their nascent gaseous discs. The favoured theoretical scenario for the origin of the TRAPPIST-1 system involves accretion of the planets further from the star, followed by a phase of disc-driven inward migration — a process first studied in the context of the Galilean moons around Jupiter. The planets’ compositions should reflect their formation zone, so this scenario predicts that the planets should be volatile-rich and have lower densities than Earth, in good agreement with our preliminary result for planet f…

In other words, we’re dealing with worlds that likely migrated in from much further out in the planetary system, meaning they formed beyond the ‘snowline,’ where ice should have been plentiful. That bodes well for possible water on the surface, depending on what we find through our atmospheric studies. TRAPPIST-1 gives us what Seager referred to as a ‘laboratory’ to study planets around red dwarfs. Here we can test out questions of tidal lock and radiation as we perform follow-up work with Hubble, Spitzer and other instruments, all the while awaiting the chance with the James Webb instrument to analyze planetary atmospheres. Transmission spectroscopy, after all, can detect water, methane, oxygen. 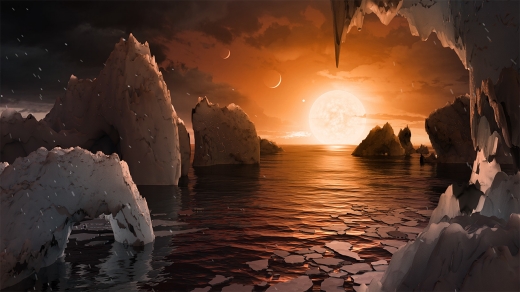 Image: An artist’s conception of the view from the surface of TRAPPIST-1f like this might easily have run as the cover on a 1950s issue of Hans Stefan Santesson’s Fantastic Universe, or maybe one of the large-size Analogs from the early 1960s. Now we’re learning that places like this are really out there. Credit: NASA/JPL-Caltech.

Meanwhile, I can’t help but think in terms of science fiction, and how well the image above would have fit on many a novel dust jacket or magazine cover. From one of these planets, we can look up and see other planets close enough to spot geographical features and cloud patterns. If life emerges on one of these worlds, it can surely move between them, as we know from the presence of so many Martian rocks that have made their way to the Earth. And if a civilization might arise with views like these, what a spur toward the development of technologies to go into space and visit not one but a host of compelling neighbors!