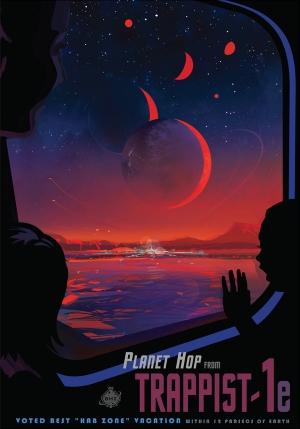 Let’s turn the clock back a bit on the TRAPPIST-1 discoveries with a reminder of Hubble work on this system announced last July. A team led by Julien de Wit (MIT) used the Hubble Space Telescope’s Wide Field Camera 3 to look for atmospheres on TRAPPIST-1b and 1c, two of the three planets then known around this star. The researchers were able to take advantage of a rare simultaneous transit, when both planets crossed the star within minutes of each other, an event that has been calculated to occur only every two years.

The result: No sign of the kind of hydrogen-dominated atmospheres we would expect on gaseous worlds. That was good news, for reasons that Nikole Lewis (Space Telescope Science Institute) explained:

Image: NASA’s latest exoplanet ‘travel poster.’ From the JPL caption: “Some 40 light-years from Earth, a planet called TRAPPIST-1e offers a heart-stopping view: brilliant objects in a red sky, looming like larger and smaller versions of our own moon. But these are no moons. They are other Earth-sized planets in a spectacular planetary system outside our own. These seven rocky worlds huddle around their small, dim, red star, like a family around a campfire.” The poster can be downloaded here. Credit: NASA-JPL/Caltech.

This was, of course, before we knew there were seven planets in this system, but it was clear at the time that future observations would be needed to tell us what kind of atmospheres these worlds had, if any, and what their surface conditions might be. The paper in Nature also noted the need for spectroscopic analysis to look for methane or water features, all part of estimating the depth of any atmospheres on the two worlds.

I hark back to this story because we’re proceeding with exactly the kind of focused work the de Wit team was calling for in the summer of 2016. For it turns out that the discovery of TRAPPIST-1’s first three planets, and the four subsequent ones, was part of a larger project called the Search for habitable Planets EClipsing ULtra-cOOl Stars (SPECULOOS), whose goal is to search for planets in the habitable zones of the nearest 500 ultracool stars and brown dwarfs.

Its acronym created as a nod to a Flemish spiced shortbread, SPECULOOS is in the early stages of its work. At the European Southern Observatory’s Paranal Observatory in Chile, four robotic telescopes make up the observing infrastructure, each of them housing a one-meter primary mirror and cameras sensitive in the near-infrared. The project involves scientists from the University of Liège (Belgium) as well as other universities, and is under the leadership of Michaël Gillon, who has led the TRAPPIST-1 planetary discovery effort.

Thus the TRAPPIST effort (TRAnsiting Planets and PlanetesImals Small Telescopes) is actually folded into the larger SPECULOOS survey, as is a second ESO effort at Oukaïmden Observatory in Morocco. But SPECULOOS is designed to survey ten times as many red dwarfs as TRAPPIST does, and according to this ESO news release, it is expected to discover a number of systems similar to TRAPPIST-1, at least in terms of the number of planets involved, if perhaps not as fortuitously angled to give us seven transits.

Thus the Hubble work of 2016 can be placed within a larger context, the ongoing effort to survey nearby red dwarfs and brown dwarfs and determine which of these are most suitable for studying their atmospheres. By examining the mass, radius and orbital parameters of such worlds and analyzing possible atmospheres, SPECULOOS will feed future observatories like the James Webb Space Telescope and the 39-meter European Extremely Large Telescope with the target list they need.

The excitement of this ‘golden age’ of exoplanet discovery can only build as we realize that these upcoming observatories, along with missions like TESS (Transiting Exoplanet Survey Satellite) and CHEOPS (CHaracterising ExOPlanets Satellite) are not that far in the future (TESS is scheduled for launch in 2018, and CHEOPS should be ready for launch by then). Having made a statistical analysis of the broad exoplanet population with Kepler, we now turn to stars closer to home, and the possibility of finding biomarkers in their atmospheres.