Planet Formation inside a Circumbinary ‘Snowline’

The binary system SDSS 1557, about 1000 light years from Earth, was thought to be a single white dwarf star until detailed measurements revealed that the brighter star was being gravitationally influenced by a hither unseen brown dwarf. And that, in turn, has given us an intriguing look at possible planetary formation around both members of a close binary. We’ve found gas giants in such systems, but researchers led by Jay Farihi (University College London) have found signs of rocky debris here that point to the possibility of planets of a much different composition.

“Building rocky planets around two suns is a challenge,” says Farihi, “because the gravity of both stars can push and pull tremendously, preventing bits of rock and dust from sticking together and growing into full-fledged planets. With the discovery of asteroid debris in the SDSS 1557 system, we see clear signatures of rocky planet assembly via large asteroids that formed, helping us understand how rocky exoplanets are made in double star systems.” 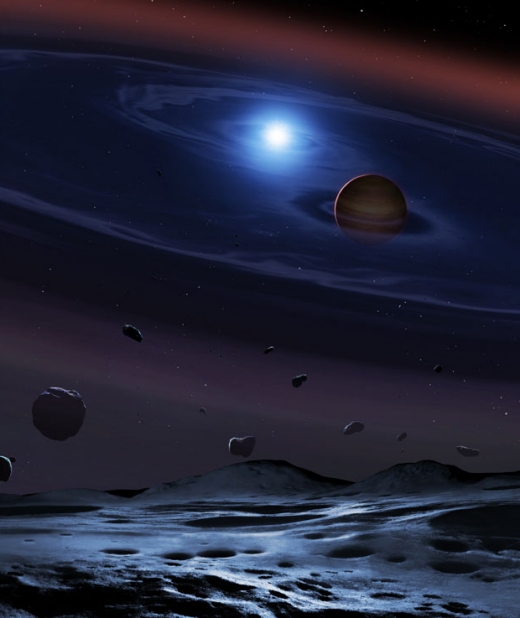 Image: A disc of rocky debris from a disrupted planetesimal surrounds white dwarf plus brown dwarf binary star. The white dwarf is the burned-out core of a star that was probably similar to the Sun, the brown dwarf is only ~60 times heavier than Jupiter, and the two stars go around each other in only a bit over two hours. Credit: Mark Garlick, UCL, University of Warwick and University of Sheffield.

Can planets, or at least their debris, survive the red giant expansion phase that leads to a white dwarf? Yes, says the new paper on this work, noting that we now have more than three dozen planetary system remnants that have been found through study of circumstellar disks of white dwarfs; we also have several hundred white dwarfs that show signs of accretion of planetary debris.

The debris around SDSS 1557 is spread around the two stars, offering a helpful target for the team’s analysis. Working with observations from the Gemini Observatory South instrument and the European Southern Observatory’s Very Large Telescope, the team found material with high metal content including silicon and magnesium, which could be identified as it was drawn onto the surface of the white dwarf. Such atmospheric pollution has become a tool for the analysis of white dwarf systems. In this case, the UCL team found that 1017 grams of matter — the equivalent of a 4 km asteroid — produced the observed result.

The paper on this work points out that planets of Neptune up to Jupiter size are unlikely to form where they have been found in Kepler detections of circumbinary planets, but are likely the result of migration. However, models exist for smaller planet formation within the snowline, which gives us the possibility of planets like the famous ‘Tatooine,’ from George Lucas’ Star Wars. And work on polluted white dwarfs adds weight to the idea.

The current paradigm of disrupted and accreted asteroids has been unequivocally confirmed by numerous studies, including the recent detection of complex and rapidly evolving photometric transits from debris fragments orbiting near the Roche limit of one star. To date, all polluted white dwarfs with detailed analyses indicate the sources are rocky planetesimals comparable in both mass and composition to large Solar System asteroids, and thus objects that formed within a snow line. These findings unambiguously demonstrate that large planetesimal formation in the terrestrial zone of stars is robust and common. 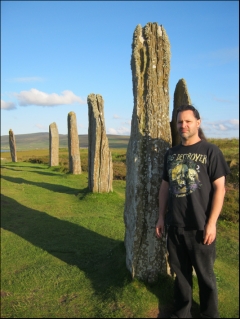 Dr. Farihi is on record (on his homepage) as saying that he believes we will learn more about extrasolar terrestrial planets using white dwarfs than any other method. The reason: The atmospheres of cool white dwarfs feature hydrogen and helium that can easily become polluted by small amounts of heavy elements. Work like the current paper reminds us that we can use this metal pollution to measure the composition of rocky material around the star.

The debris responsible for white dwarf atmospheric pollution is believed to come from tidally destroyed asteroids whose parent bodies were large and differentiated. Farihi notes that we may be looking at the parent bodies of planetesimals or even fragments of major planets, with compositions similar to material found in our own inner Solar System. He estimates that 20% to 30% of all white dwarfs are orbited by the remains of terrestrial planetary systems.

The SDSS 1557 discovery calls for continuing follow-ups, for as co-author Boris Gänsicke (University of Warwick) points out, the signature is transient. Says Gänsicke:

“Any metals we see in the white dwarf will disappear within a few weeks, and sink down into the interior, unless the debris is continuously flowing onto the star. We’ll be looking at SDSS 1557 next with Hubble, to conclusively show the dust is made of rock rather than ice.”

So at SDSS 1557 we have all the markers of a parent body that formed within the snowline, which implies that rocky planet formation in circumbinary orbits within a close double system is feasible. The paper concludes: “These observations therefore support a picture where additional mechanisms can promote planetesimal growth in the terrestrial zones of close binary stars, which are predicted to be substantially wider than in planet forming disks around single stars.”

Previous post: A Volcanic View of the Habitable Zone