Are we homing in on a ‘missing link’ in our theories of planet formation? Perhaps so, judging from the work of researchers at Swinburne University of Technology, Lyon University and St. Andrews University. The work does not challenge a central principle in current thinking, that planets form out of disks of gas and dust grains around young stars. We know that these dust grains grow into centimeter-sized aggregates. We also know that, much later, planetesimals (kilometers in size) grow into planetary cores.

What has been missing is an understanding of how the early ‘pebbles’ are able to aggregate into asteroid-sized objects. One problem is that drag in the disk produced by surrounding gas makes the grains move inward toward the star, a movement that can deplete the disk. The paper describes this as a ‘radial drift barrier,’ in which the grains settle to the midplane of the disk and drift inwards as they lose angular momentum. Taken to its conclusion, the process can lead to accretion into the star, preventing disk grains from ever forming planetesimals.

The second issue: Larger dust grains with higher relative velocities can experience collisions that make aggregation impossible. This is the so-called ‘fragmentation barrier,’ where dust grains shatter instead of sticking after collisions.

How, then, do planets actually form? The researchers have created simulations developing a theory involving ‘dust traps,’ high-pressure locations in the disk where dust grains accumulate as drift motion slows. The accumulation of growing and fragmented grains interacts with circumstellar gas to create these areas, in which trapped particles can grow. At reduced speeds within the traps, the grains avoid fragmentation. The process is depicted in the image below. 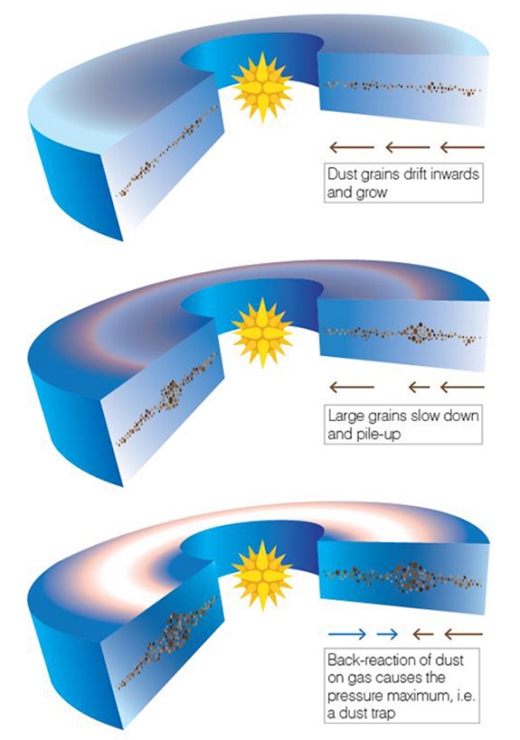 Image: The stages of the formation of dust traps. The central (yellow) star, surrounded by the protoplanetary (blue) disk. The dust grains make up the band running through the disk. Credit: © Volker Schubert.

“What we have been able to identify is the key role of the drag of dust on the gas. Often in astronomy, the gas tells the dust how to move, but when there is a lot of dust, the dust tells the gas how to move. This effect, known as aerodynamic drag back-reaction, is usually negligible. However, the effect becomes important in dust rich environments, like those found in the planet formation process.”

Back-reaction, in other words, slows the drift of dust grains inward toward the star, giving them time to grow in size to the point where drag from the gas no longer determines their fate. The gas is pushed outwards to form the high pressure region the team calls a dust trap. Concentrated dust grains in the dust traps then spark the subsequent formation of planets.

The process functions in the team’s simulations for a wide range of initial disk structures and dust to gas ratios. From the paper:

The process, then, should be widespread despite differences in the stellar environment. The key thing is that the formation of the dust traps makes subsequent planet formation possible. How the fragmentation of dust grains operates determines the result:

While seemingly counter-intuitive, fragmentation is a vital ingredient for planet formation as it helps to form dust traps at large distances from the star. Indeed, fragmentation only allows grains to grow exterior to a certain radial distance and when grains decouple from the gas and start piling up, they do so near that radius. Stronger fragmentation, with a lower fragmentation threshold, implies that this radius lies farther away from the star. This would suggest that most discs thus retain and concentrate their grains at specific locations in time-scales compatible with recent observations of structures in young stellar objects.

The researchers have found a way to overcome the planetary formation bottleneck, allowing micrometer-sized dust grains to grow to centimeter-size and above, forming the structures that will eventually be incorporated into planetesimals. The process of going from planetesimal to planet, the researchers argue, has been considered through various mechanisms, but the missing piece has always been the preservation of the original dust grains in the disk long enough for aggregation to occur before their accretion into the star. Here, at least, we have a theoretical mechanism to explain how the grains are preserved and can grow.