You wouldn’t expect main belt asteroids to develop tails like comets — their orbits are circular enough that they don’t undergo the kind of temperature swings many comets experience in their plunge toward perihelion — but we do have some twenty cases of asteroids that do exactly that. The photo below, showing imagery from the 10.4-meter Great Canary Telescope, gives us views of asteroid P/2016 G1, with a smudgy dust trail splayed out behind the object.

Image: Asteroid P/2016 G1 at three different times in 2016: late April, late May and mid June. The arrow in the center panel points out an asymmetric feature that can be explained if the asteroid initially ejected material in a single direction, perhaps due to an impact. Credit: Fernando Moreno (Institute of Astrophysics of Andalusia, Spain).

Moreno and team, who have specialized in the dust environment near main belt objects, have now uncovered another intriguing asteroid, this one with an even more curious tail. Asteroid P/2016 J1 turns out to be an asteroid pair, of a kind that seem to occur not infrequently in the main belt. The likely origin of the pair is an impact that broke a single asteroid into two parts, but astronomers studying the object also believe it could have fragmented because of an excess of rotational speed. Asteroid pairs gradually drift apart from each other, their gravitational link not strong enough to hold them together, but they remain in roughly similar orbits around the Sun.

Image: Images of the P/2016 J1 asteroid pair taken on May 15th, 2016. They show a central region, the asteroid, and a diffuse blot corresponding to the dust tail. Credit: Moreno et al.

Moreno notes what makes P/2016 J1 unusual: Both fragments show dust structures similar to a comet, making this the first time we have seen an asteroid pair undergoing simultaneous activity. Both elements of the pair became activated near perihelion, between the end of 2015 and the beginning of 2016, and they displayed their tail-like structures for up to nine months.

Moreno and team used the Great Telescope of the Canary Islands (GTC) and the Canada-France-Hawaii Telescope (CFHT) to study the P/2016 J1 pair, discovering that the asteroid fragmented about six years ago, based on analysis of its orbital evolution. This makes it the youngest asteroid pair known. The asteroid pair takes 5.65 years to complete an orbit, meaning that the fragmentation would have occurred on the previous orbit. 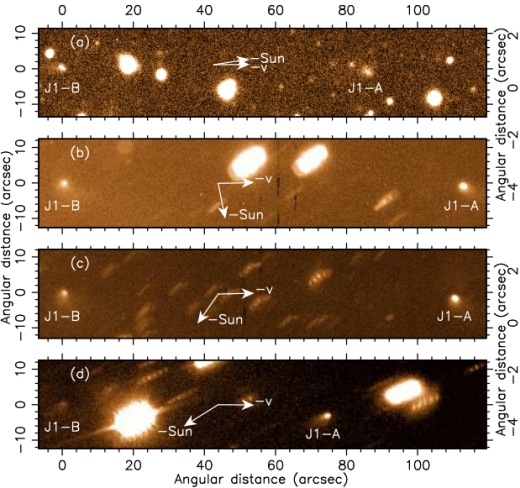 The tail is not directly caused by the original fragmentation, but seems to have happened as an after-effect. Moreno believes we are looking at dust emissions caused by the sublimation of ice that was originally exposed by the breakup. This contrasts with the earlier asteroid tail on P/2016 G1, which Moreno and colleagues believe was the result of an impact. The team’s models show that the ejected material on P/2016 G1 was not isotropically emitted. 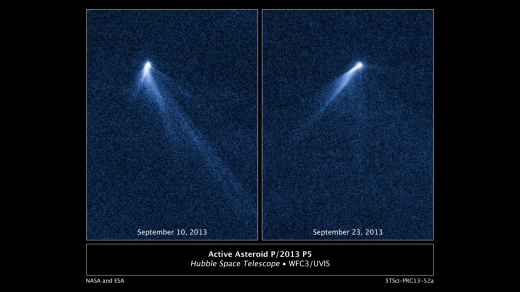 Image: Another view of an activated asteroid with a tail, this one showing Hubble Space Telescope images of the asteroid P/2013P5. Credit: NASA/ESA.