We’ve looked recently at the possibility of cryovolcanism on Ceres with regard to the unusual feature called Ahuna Mons (see Ice Volcanoes on Ceres?). Now we have further evidence that outbursts of brine from beneath the surface have been occurring over long periods of time, and that some of these eruptions have been recent. The work comes out of analysis of data from the Dawn mission by scientists at the Max Planck Institute for Solar System Research (MPS), and moves the debate to the unusual crater called Occator. 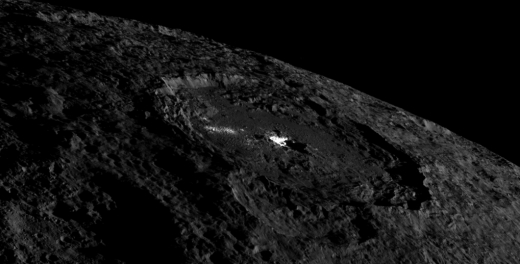 Image: This view of the whole Occator crater shows the brightly colored pit in its center and the cryovolcanic dome. The jagged mountains on the edge of the pit throw their shadows on parts of the pit. This image was taken from a distance of 1478 kilometers above the surface and has a resolution of 158 meters per pixel. NASA/JPL-Caltech/UCLA/MPS/DLR/IDA.

Dawn’s Low Altitude Mapping Orbit (December 2015 to September 2016) took the spacecraft to within 375 kilometers of the surface, allowing highly resolved images of Ceres’ surface to be obtained. The geological structures on display within Occator, tracked by the Dawn Framing Cameras and its infrared spectrometer, include smaller, younger craters along with fractures and avalanches, all presenting us with a look into the crater’s evolution.

The bright dome in Occator crater’s central pit, now known as Cerealia Facula, is one of Ceres’ most intriguing features. Infrared data have shown it to be rich in carbonates. Beyond the pit itself, we also find other bright areas called Vinalia Faculae, considerably paler and evidently thinner, though likewise containing carbonates along with dark surrounding material. The MPS researchers, led by Framing Camera lead investigator Andreas Nathues, have evaluated images of Occator from various distances and different angles of view.

It took more than a single impact to produce what we see in Occator crater, though that impact was likely the trigger for subsequent cryovolcanism. As explained by Nathues:

“The age and appearance of the material surrounding the bright dome indicate that Cerealia Facula was formed by a recurring, eruptive process, which also hurled material into more outward regions of the central pit. A single eruptive event is rather unlikely.” 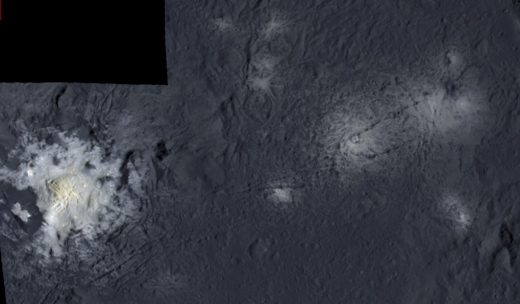 Image: False color mosaic showing parts of Occator crater. The images were taken from a distance of 375 kilometers. The left side of the mosaic shows the central pit containing the brightest material on Ceres. It measures 11 kilometers in diameter and is partly surrounded by jagged mountains. In the middle of the pit a dome towers 400 meters high covered by fractures. It has a diameter of three kilometers. The right side of the mosaic shows further, less bright spots in Occator crater. NASA/JPL-Caltech/UCLA/MPS/DLR/IDA.

What’s especially interesting here is the age issue, for this is the first time scientists have determined the age of the bright material. As this MPS news release explains, Nathues and team believe the central pit in Occator, which contains a jagged ridge, is all that is left of a former central mountain that would have formed as a result of the impact that created the crater about 34 million years ago. The age estimate comes from studying smaller craters formed from later impacts, and the Dawn images are so highly resolved that the crater count — and the age estimates that emerge from it — are the most accurate to date. The bright material of the dome is made up of much younger material, about four million years old. 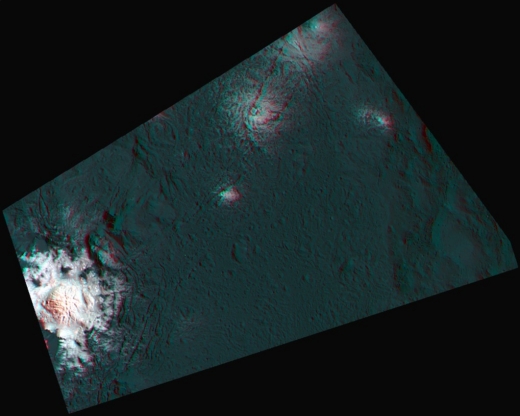 Image: This 3d-anaglyph for the first time shows a part of Occator crater in a combination of anaglyphe and false-color image. NASA/JPL-Caltech/UCLA/MPS/DLR/IDA.

Domes like this, interpreted as signs of cryovolcanism, appear on the Jovian moons Callisto and Ganymede, and the new work argues that the same process is happening on Ceres. The original Occator impact would have caused subsurface brine to move closer to the surface, allowing water and dissolved gases to form a system of vents. Fractures on the surface formed, from which brine began to erupt, depositing salts that led to the formation of the dome.

The process may still be active, though at a much lower level. Imagery of the area at certain angles has revealed what appears to be haze, a phenomenon the researchers explain as the result of sublimating water ice. Imagery from Dawn taken at distances as far as 14000 kilometers have shown unmistakeable variations in brightness that follow a diurnal rhythm. Says Guneshwar Singh Thangjam (MPS):

“The nature of the light scattering at the bottom of Occator differs fundamentally from that at other parts of the Ceres surface. The most likely explanation is that near the crater floor an optically thin, semi-transparent haze is formed.”

I should add, though, that there is a great deal we have yet to learn about this haze, as explained in one of two papers on this work:

The available data are insufficient for an analysis of the optical properties of this haze, but it is most likely an optically thin and semi-transparent layer forming at near-surface level. Diurnal albedo variations that correspond to Occator’s longitude have been detected by radial velocity changes (Molaro et al. 2016) supporting the existence of a temporarily varying haze layer. The detection of water-ice signatures at Oxo [a second crater at which haze has been detected] further supports ongoing sublimation activities on Ceres. Although we expect the maximum haze concentration above the central spot in Occator, it is remarkable that our data also indicate activity at the secondary spots.

The water sublimation, and thus the intensity of the haze, varies with the degree of sunlight. This explanation makes Ceres the closest body to the Sun that experiences cryovolcanism. It is the age difference — the bright deposits are 30 million years younger than the crater — as well as the distribution of the bright material within the crater itself, that tells us how active Occator crater has been and, on a much smaller scale, continues to be to this day.

Next post: Biofluorescence: A Potential Biosignature for M-Dwarf Planets