The seven planets circling the star TRAPPIST-1 have been lionized in the media, and understandably so, given that more than one have the potential for habitability. But of course M-dwarfs call up the inevitable problems associated with such tiny stars. Habitable planets must orbit close to the star, with the probability of tidal lock and subsequent climatic issues. Moreover, the flare activity particularly in young M-dwarfs gives cause for concern.

It’s the latter issue that Jack T. O’Malley-James and Lisa Kaltenegger (both at Cornell, where Kaltenegger is director of the Carl Sagan Institute) have explored in a new paper to be published in The Astrophysical Journal. As the paper explains, the question of habitability becomes troubling when we realize how frequently an M-dwarf can flare. Proxima Centauri, an M5 star, undergoes intense flares every 10 to 30 hours, with effects on the planet in its habitable zone that are still unknown. Can a planet with high doses of ultraviolet radiation remain habitable under such bombardment?

We probe such questions with particular urgency because 75 percent of the stars in the neighborhood of the Sun are M-dwarfs, and we’re about to send the TESS mission (Transiting Exoplanet Survey Satellite) into space to look for habitable zone planets around nearby stars. TESS will be able to do this for late M and early K stars, and as Kaltenegger notes, the mission is expected to uncover hundreds of planets between 1.25 and 2 Earth radii in size, and tens of Earth-sized planets, some of them likely to be in the habitable zone. 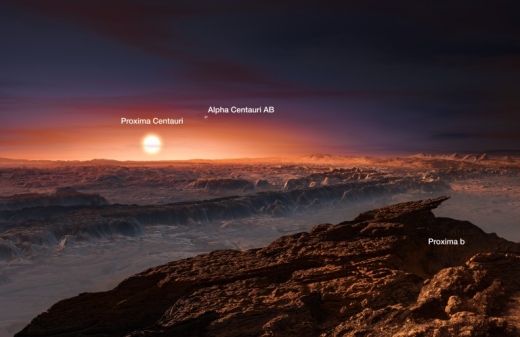 Image: Artist’s impression of the Alpha Centauri stellar system as viewed from the surface of the habitable-zone planet Proxima b. Credit: ESO/M. Kornmesser

TESS findings will be handed off to future ground and space-based missions for detailed study, making it likely that the first habitable zone planet that we can characterize will orbit a nearby M star. Recent studies have looked at the biological effects of radiation for atmospheres corresponding to different times in the evolution of the Earth, finding that such a planet orbiting an inactive M-dwarf would receive a lower ultraviolet flux than Earth.

But active M-dwarfs are another story. Planets orbiting such a star would receive bursts of UV in their tight, habitable zone orbits, increasing the surface UV flux by as much as two orders of magnitude for up to several hours. Add in the fact that M stars remain active for longer periods than G-class stars like the Sun, and the scenario looks dicey for life indeed. Consider the atmospheric effects, as noted in the paper:

The close proximity of planets in the HZ of cool stars can cause the planet’s magnetic field to be compressed by stellar magnetic pressure, reducing the planet’s ability to resist atmospheric erosion by the stellar wind. X-ray and EUV flare activity can occur up to 10-15 times per day, and typically 2-10 times, for M dwarfs (Cuntz & Guinan, 2016), which increases atmospheric erosion on close-in planets. This results in higher fluxes of UV radiation reaching the planet’s surface (Lammer et al. 2007; See et al., 2014) and, potentially, a less dense atmosphere.

We also have to keep in mind that in such close orbits, the effect of the star’s stellar wind would be orders of magnitude stronger in the habitable zone than what Earth experiences. The result: Erosion of any protective ozone shield and potential loss of at least some of the atmosphere. Biological molecules under such conditions can undergo mutation. We’re fortunate that on our planet, the ozone layer blocks the most damaging UV wavelengths. For life to flourish, some way of protecting it from this radiation is thus a prerequisite. 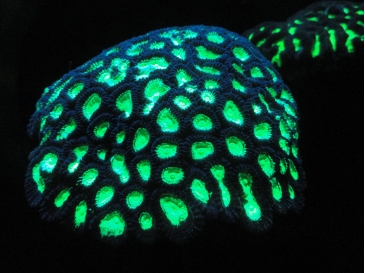 Going underwater is one solution, or burrowing deep into the ground, a strategy that could prove life-saving but also make detection by remote instruments extremely difficult. But there is one adaptation that would be detectable: photoprotective biofluorescence. In this process, protective proteins absorb harmful wavelengths and re-emit them at longer, safer wavelengths. Some species of coral are believed to use this mechanism to protect symbiotic algae needed for energy, with fluorescent proteins absorbing blue and UV photons and re-emitting them at longer wavelengths.

Biofluorescence occurs when specialized fluorescent molecules are excited by high-energy light, causing them to absorb part of that energy and release the rest at lower-energy wavelengths. Such biofluorescent light can only be seen when the organism is being illuminated, which could be the key to their detection on other worlds. From the paper:

Photoprotective biofluorescence (the “up-shifting” of UV light to longer, safer wavelengths, via absorption by fluorescent proteins), a proposed UV protection mechanism of some coral species, would increase the detectability of biota, both in a spectrum, as well as in a color-color diagram. Such biofluorescence could be observable as a “temporal biosignature” for planets around stars with changing UV environments, like active flaring M stars, in both their spectra as well as their color.

The color-color diagram referred to above is frequently used in the study of star-forming regions, and as a way of comparing the apparent magnitudes of stars. Here one observes the magnitude of an object successively through two different filters — the difference in brightness between two bands at certain wavelengths is what is referred to as ‘color.’ One brightness range is plotted on the horizontal axis, while another range is plotted on the vertical axis. 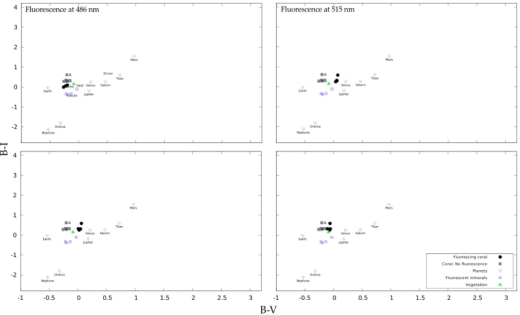 Image (click to enlarge): A color-color diagram. This is Figure 10 from the paper. Caption: Color-color diagrams of planet models with an atmosphere and 50% cloud cover, and a surface that is completely covered by biofluorescent corals, fluorescent minerals, or vegetation compared to the colors of planets in our own Solar System, before (grey – labelled A, B, C, D) and during fluorescence at each of the four common emission wavelengths. Credit: Jack O’Malley-James / Lisa Kaltenegger.

The authors argue that color-color diagrams can distinguish biological sources of fluorescence from abiotic ones, as the change in color that biofluorescence produces differs from all other forms of the phenomenon:

Using a standard astronomy tool to characterize stellar objects, a color-color diagram, one can distinguish planets with and without biofluorescent biosignatures. The change in color caused by biofluorescence differs, in position and magnitude, from that caused by abiotic fluorescence, distinguishing both.

The authors point out that Proxima b will be a prime target to search for biofluorescence with the upcoming European Extremely Large Telescope. But TESS should give us a number of useful targets as we examine stars during flare periods looking for a biofluorescent biosphere. In other words, it may be that in the case of a planet orbiting an active M-dwarf, it’s precisely the high UV flux that will allow us to detect a biosphere that would otherwise be hidden.

The paper is O’Malley-James and Kaltenegger, “Biofluorescent Worlds: Biological fluorescence as a temporal biosignature for flare stars worlds,” to be published in The Astrophysical Journal (preprint). A second paper from Lisa Kaltenegger, “UV Surface Habitability of the TRAPPIST-1 System,” is now under review at Monthly Notices of the Royal Society. More on that one when I have a copy to work with.