K2 Campaign 12 is an observational window that comes at the right time. Operating as the K2 mission, the Kepler spacecraft collected data from December 15, 2016 to March 4 of this year on the TRAPPIST-1 system. With seven planets, at least six of them likely to be rocky worlds, TRAPPIST-1 is suddenly high on everyone’s target list for future observation. The new Kepler data are a key part of this, as Geert Barentsen, K2 research scientist at NASA’s Ames Research Center at Moffett Field, California, explains:

“Scientists and enthusiasts around the world are invested in learning everything they can about these Earth-size worlds. Providing the K2 raw data as quickly as possible was a priority to give investigators an early look so they could best define their follow-up research plans. We’re thrilled that this will also allow the public to witness the process of discovery.”

The raw cadence data — ‘cadence’ refers to the time between observations of the same target — are available from the archive at MAST. Note that these are raw data files, absent any vetting or processing. Data that have been put through this process will be available some time in June. On the NASA Kepler & K2 site, Barentsen described the use of the data this way:

While we recommend that scientists only use the pipeline-processed data products in journal papers, we do encourage our community to share their understanding of the raw data with the public by blogging or tweeting tutorials and analyses. This public TRAPPIST-1 data set offers a unique opportunity to let a wider audience witness the process [of] scientific discovery. 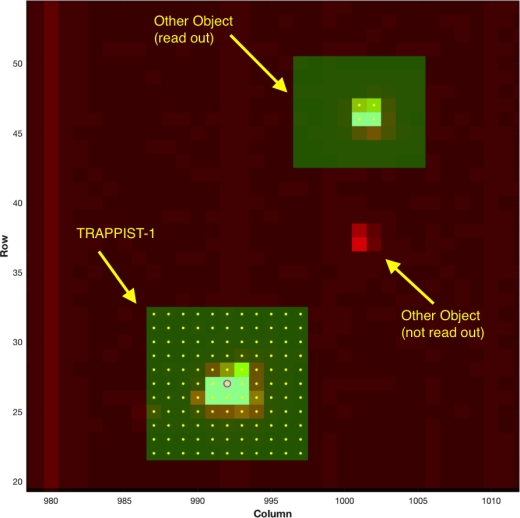 Image: Simulated image of TRAPPIST-1’s location on the detector, from the “Create Optimal Aperture” component of the Photometric Analysis module. The 11×11-pixel aperture of K2 ID 200164267 is represented by the yellow dots. The output module for TRAPPIST-1 is 19.4, its channel is 68, and it’s located approximately at pixel row 27, column 992. Credit: MAST/STScI.

Meanwhile, the raw, uncalibrated data are intended as an aid to astronomers as they prepare proposals due this month for further investigations of TRAPPIST-1 by telescopes on Earth. Needless to say, the data gathered here, once refined and fully examined, will also factor into observations of the TRAPPIST-1 planets by the James Webb Space Telescope.

K2 Campaign 12 offers 74 days of monitoring, the longest, nearly continuous set of observations of the star yet, and as this NASA news release explains, the data give us the chance to refine earlier measurements of the TRAPPIST-1 planets, refine the orbit and mass of the seventh planet (TRAPPIST-1h), and delve into the magnetic activity of the host star.

The preparation for this observing run began in May of 2016, when the discovery of the first three planets in the system was announced. The Kepler spacecraft’s operating system was then tweaked to make needed pointing adjustments for Campaign 12. A good bit of serendipity went into the observations, for the original coordinates for Campaign 12 were set in October of 2015 before the TRAPPIST-1 planets were known. Had the exoplanet discovery not occurred when it did, Campaign 12 might have missed the system entirely.

“We were lucky that the K2 mission was able to observe TRAPPIST-1. The observing field for Campaign 12 was set when the discovery of the first planets orbiting TRAPPIST-1 was announced, and the science community had already submitted proposals for specific targets of interest in that field,” said Michael Haas, science office director for the Kepler and K2 missions at Ames. “The unexpected opportunity to further study the TRAPPIST-1 system was quickly recognized and the agility of the K2 team and science community prevailed once again.”

Another indication of the importance of the TRAPPIST-1 planets, and the likelihood that atmospheres here will be among the first investigated as we begin the search for biomarkers.

Next post: HD 219134: A Nearby System with Multiple Transits