The data recently made available from Campaign 12 of K2 (the Kepler spacecraft’s two-reaction wheel mission) is already paying off in the form of information about the outermost planet in the TRAPPIST-1 system. Campaign 12 (described in Kepler Data on TRAPPIST-1 Coming Online) began on December 15 of 2016 and ran until March 4 of this year, though the spacecraft was in safe mode for a time, producing a 5-day data loss.

An international team including lead author Rodrigo Luger (University of Washington) and TRAPPIST-1 planet discoverer Michaël Gillon (Université de Liège) used the K2 data to constrain the period of TRAPPIST-1h, the outermost planet in this seven-planet system, which had only been observed to transit once before now. The team was also looking for additional planets (none were found) and, of course, examining resonances with the inner worlds.

The result: The orbital period of TRAPPIST-1h is found to be 18.764 days, a figure that fits into the pattern of resonance that the team’s theoretical work had predicted. TRAPPIST-1h is thus “…the seventh member of a complex chain, with three-body resonances linking every member.” The paper goes on to tell us that the planet has a radius of 0.715 R⊕, and an equilibrium temperature of 169 K, meaning it orbits at the snow line. 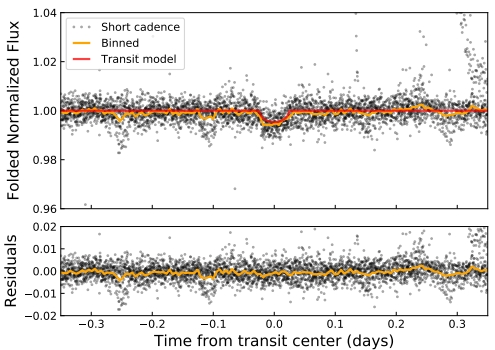 Image: Figure 3 from Luger et al. Caption: The short cadence data folded on the four transits of planet h after correcting for TTVs and subtracting a simultaneous transit of b and a near-simultaneous flare. Other transits of b − g have not been removed and are visible in parts of the data. The data downbinned by a factor of 30 is shown as the orange line, and a transit model based solely on the Spitzer parameters is shown in red. The residuals (data minus this model) are shown at the bottom. Credit: Luger et al.

The paper notes that the stellar flux TRAPPIST-1h receives from its star is below what would be required to sustain liquid water under an atmosphere dominated by nitrogen, carbon dioxide and water (a hydrogen dominated atmosphere could theoretically make it possible). Nor is it on an orbit eccentric enough for tidal heating to warm the surface sufficiently. Nonetheless, tidal interactions play an important role in the evolution of the TRAPPIST-1 planets’ orbits. On the matter of formation and evolution, this was interesting:

The resonant structure of the system suggests that orbital migration may have played a role in its formation. Embedded in gaseous planet-forming disks, planets growing above ∼ 1 MMars create density perturbations that torque the planets’ orbits and trigger radial migration. One model for the origin of low-mass planets found very close to their stars proposes that Mars- to Earth-sized planetary embryos form far from their stars and migrate inward. The inner edge of the disk provides a migration barrier such that planets pile up into chains of mean motion resonances.

We can even extrapolate something about the speed of formation which, in turn, would have affected the compactness of the resulting system:

The TRAPPIST-1 system may thus represent a pristine surviving chain of mean motion resonances. Given that TRAPPIST-1’s planet-forming disk was likely low in mass and the planets themselves are low-mass, their migration was likely relatively slow. This may explain why TRAPPIST-1’s resonant chain is modestly less compact than chains in systems with more massive planets, which may have protected it from instability. 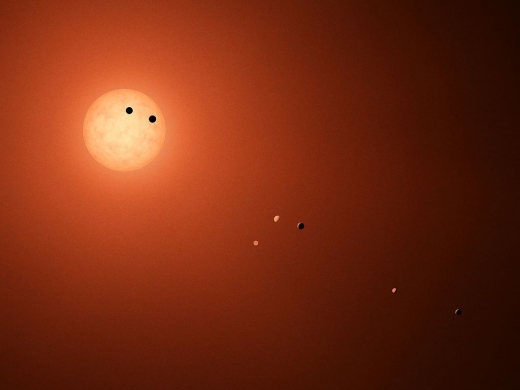 Image: An artist’s illustration of the seven TRAPPIST-1 planets. Sizes and relative positions are to scale. Credit: NASA/JPL-Caltech.

On the star TRAPPIST-1 itself, the researchers discovered it to be prone to star spots, making it possible to determine a rotational period of about 3.3 days, roughly comparable to nearby late M-dwarfs. The paper suggests an age in the range of 3 to 8 billion years. And note this re flare activity:

The presence of star spots and infrequent weak optical flares (0.38 d−1) for peak fluxes above 1% of the continuum, 30 times less frequent than active M6-M9 dwarfs are consistent with a low-activity M8 star, also arguing in favor of a relatively old system.

I notice that an energetic flare occurred at the end of the K2 campaign, and the authors promise that a full model of flare activity will be offered in an upcoming paper. This is useful information as we investigate questions of habitability among the inner worlds, for flares can damage atmospheres and have other adverse consequences for life.

It’s fascinating to consider how work like this develops from a damaged spacecraft. The paper points out that because of its two failed reaction wheels, the Kepler spacecraft’s rolling motion (created by imbalances in torque) induces strong instrumental effects, which lead to an increase of between 3 and 5 times in photometric noise compared to the original mission. The paper explains how removing these instrumental effects is done, but I continue to marvel at the fact that Kepler is still producing good science despite its serious internal problems.

The paper is Luger et al., “A terrestrial-sized exoplanet at the snow line of TRAPPIST-1,” submitted to Nature Astronomy (preprint).