I like the way Jun Matsumoto approaches his work. A researcher with JAXA (Japan Aerospace Exploration Agency), Matsumoto is deeply involved in the design of the space sail that will pick up where Japan’s IKAROS left off. Launched in 2010, the latter was a square sail 14 meters to the side that demonstrated the feasibility of maneuvering a sail on interplanetary trajectories. JAXA has talked ever since about going to Jupiter, but the challenges are formidable, not the least of which is the question of generating enough power to operate over 5 AU from the Sun. 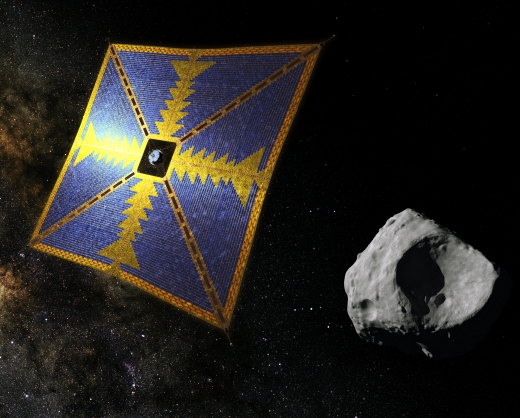 Image: A computer rendering shows what JAXA’s solar sail may look like as it approaches an asteroid. The probe is at the sail’s center. Credit: Japan Aerospace Exploration Agency.

But back for a moment to Matsumoto, who has the kind of long-term approach to his work that this site has long championed. I ran into him in an article in the Japan Times that ran last summer (thanks to James Jason Wentworth for the pointer). Matsumoto knows he is tied up in a project that will take decades, and he relishes the notion. Let me quote from the newspaper:

“I am currently the youngest JAXA staffer on this project. But by the time it is completed, I might no longer be part of the team due to retirement,” said Matsumoto, 27, who dreamed of becoming an astronaut as a child. “Wherever I go, people always talk about how to train young people to become the researchers of the next generation.

“Personally, I want to show children that there are adults who aim to explore places no human has ever gone.” 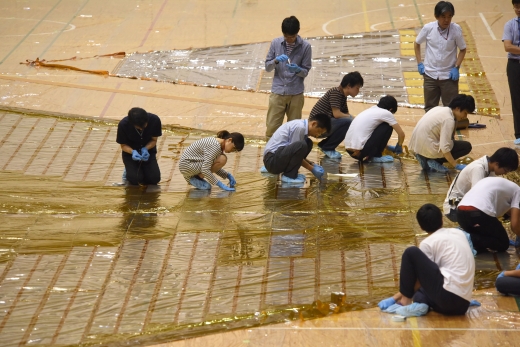 It’s been too long since I’ve talked about this mission. The time frames here come from the necessary travel and exploration time, and the lengthy process of designing and building the spacecraft in the first place. The new JAXA sail, which has been in the planning pipeline since before IKAROS flew, will span 50 meters to the side, 2500 square meters that will contain the 30,000 solar panels — thin film solar cells attached to the entire surface of the sail membrane — necessary to operate at the 5.2 AU distance of Jupiter’s trojan asteroids.

Like IKAROS, the sail will use liquid crystal reflectivity control devices as a means of attitude control. But the new sail will also carry a high specific impulse ion engine for maneuvering among the trojan asteroid population. Here we’re at a key issue in the mission, for operating this far from the Sun, generating electrical power becomes increasingly difficult, and the craft will also need to perform numerous trajectory changes. Just as significant as the sail itself, then, will be the operational success of the new sail’s solar panels and ion engine.

The sail is to be made up of 10-micrometer-thick polyimide, with the payload attached to the center of the sail. Current plans are for launch in the early 2020s. The Jupiter trojans are a group of asteroids that share orbits with the giant planet, clustering in its L4 and L5 Lagrangian points. There should be no shortage of candidates, for the total number of Jupiter trojans greater than 1 kilometer in size is estimated at 106. The JAXA sail will perform both flyby and rendezvous operations, with a landing on the surface of a 20-30 km asteroid, operations there and, if all goes well, a sample return to the Earth in the 2050s. 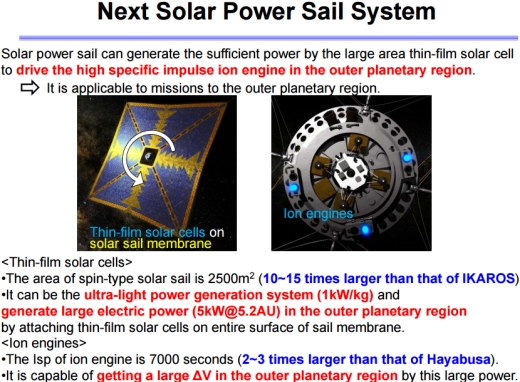 Last summer at a gymnasium in Sagamihara, Kanagawa Prefecture, a team of JAXA workers, academics and students unfolded a full-scale model of one of the sail’s four trapezoidal components before an audience of 250. As the article in the Japan Times points out, a mission lasting decades has to look not only to current researchers but the young scientists to whom its fate will be handed off, making Matsumoto’s long-term outlook germane not just to sail missions to Jupiter space but any long-haul ventures with decadal timeframes.