A massive young planet on the borderline between gas giant and brown dwarf is telling us a bit more about planet formation in general, and circumstellar disk dynamics in particular. Known as HD 106906b, the world is 11 times the mass of Jupiter and no more than 13 million years old. Its position 650 AU from its star creates an orbit that takes 1500 years to complete.

The host HD 106906, about 300 light years from Earth, is an F5-class star in the constellation Crux, the southern constellation dominated by the asterism we call the Southern Cross. 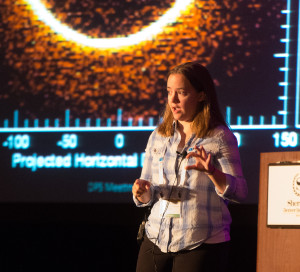 What we find here is a debris disk that is non-circular, its shape evidently explained by the presence, well outside the disk, of HD 106906b, whose orbit is elliptical. Observations through the Gemini Planet Imager, the Hubble Space Telescope and ESO’s SPHERE (Spectro-Polarimetric High-contrast Exoplanet REsearch instrument) show that we are viewing the disk nearly edge-on. The inner region appears cleared of small dust grains.

Working with these observations, a team led by Erika Nesvold, a postdoctoral fellow at the Carnegie Institution for Science, used a software tool she created called Superparticle-Method Algorithm for Collisions in Kuiper belts and debris disks (SMACK) to model the planet’s orbital path and assess its effects on the circumstellar disk.

Image: Erika Nesvold, creator of the software that made possible the new analysis of HD 106906b.

The disk, an analog of our own Kuiper Belt, is much closer to the star on one side than on the other, producing a stronger infrared signature on the warmer side. The model accurately reproduces the shape of the disk as a result of the perturbations caused by this distant planet. The team’s analysis shows that the planet must have formed outside the disk; otherwise, the disk would have been perturbed in an entirely different manner. From the paper:

Constraining the orbit of HD 106906b could have implications for its formation scenario. Prior to the publication of resolved images of the disk, it was suggested (using N-body simulations) that the companion formed interior to the disk and was scattered onto a highly eccentric orbit (Jílková & Portegies Zwart 2015). This study concluded that the disk can survive perturbations by a companion with an apocenter distance of 650 au and a pericenter distance interior to the disk if the companion’s inclination is ≿ 10°. However, this resulted in a significantly vertically perturbed disk by 10 Myr, regardless of the companion’s inclination. Our simulations indicate that a companion with an orbit completely exterior to the disk can reproduce the observed asymmetries without vertically extending the disk, supporting the scenario in which the companion formed in situ.

Image: Two images of the HD 106906 stellar system created by Erika Nesvold and her team’s simulation. The left panel shows a zoomed-in image of the ring of leftover rocky and icy planet-forming material that is rotating around the star. (The star is masked by the black circle.) The different hues represent gradients of brightness in the disk material. (Yellow is the brightest and blue the dimmest.). The right panel shows a farther-out view of the simulated system. The star is represented by the yellow circle with an arrow pointing to the exoplanet, HD 106906b. Nesvold’s team demonstrated that the exoplanet is shaping the structure of the debris disk, which is shown by the white and blue dots encircling the star. Credit: Erika Nesvold/Carnegie Institution for Science.

SMACK is able to re-create the shape of the disk without the addition of any planets within the disk itself, although the question of possible planets there remains open. The paper acknowledges that while HD 106906b can account for the disk’s shape, there are alternative mechanisms, including a planet within the debris disk, that could also force its eccentricity. Tightening up the parameters of HD 106906b’s orbit should help to resolve the question. 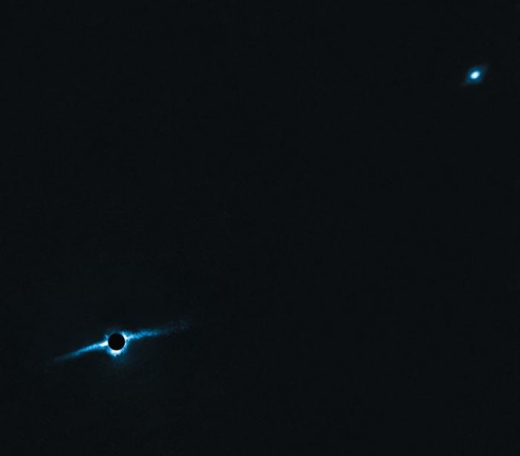 Image: This is an actual observation of HD 106906 taken by the European Southern Observatory’s planet-finding tool SPHERE. The star is blacked out by a circle (which masks its glare from blinding the instrument) and the debris disk can be seen in the lower left. In the upper right is the exoplanet, 106906b. The simulation created by Erika Nesvold and her team accurately recreated the observed characteristics of the disk: the disk is brighter on its eastern (left) side, and oriented about 20 degrees clockwise from the planet’s position on the sky. Credit: ESO and A.M. Lagrange of Université Grenoble Alpes.

Modeling tools like SMACK are going to be turned to other young system disks as we work to understand planetary evolution. After all, we’re seeing the process here in its infancy. “In our solar system, we’ve had billions of years of evolution,” said Michael Fitzgerald, UCLA associate professor of physics and astronomy, and a co-author on the study. “We’re seeing this young system revealed to us before it has had a chance to dynamically mature.”

The paper points out that previously undetected planets may be investigated by modeling the asymmetries in such disks. We do know that systems like this, with a large, exterior perturber of some kind, are not uncommon. Some 25 percent of known debris disks exist, for example, in binary or triple star systems. Understanding disk perturbations, whether they are caused by planets within the disk or outside of it, may point us toward the worlds that cause them.

Next post: Star in Tight Orbit around Black Hole