Skyscraper in the Clouds

Analemma seems the perfect name for the proposed ‘floating’ space tower being discussed by the Clouds Architecture Office, an imaginative New York firm whose unusual designs include a Martian habitat made of ice and a concept study of flight into deep space using comets for resources. An analemma is a diagram that traces the movement of the Sun in the sky as seen from a particular location on Earth. Over time, the position changes because of orbital eccentricity and our planet’s axial tilt, so that a slim figure-eight is the result.

That’s relevant to the Analemma tower because it is conceived as a huge construction tethered to an asteroid that would be moved into what the firm describes as ‘an eccentric geosynchronous orbit’ over Earth. The orbit allows the structure to move between the northern and southern hemispheres, tracing out a figure-eight over the surface. With the slowest speed over the ground at the top and bottom of the figure-eight, Clouds Architecture Office suggests that occupants could move back and forth, interacting with ground resources at these points. New York City is suggested as the location for one of the slow parts of the preferred orbit. 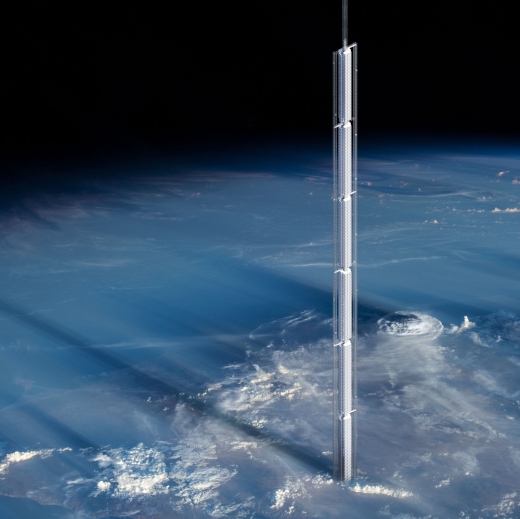 Image: Analemma inverts the traditional diagram of an earth-based foundation, instead depending on a space-based supporting foundation from which the tower is suspended. This system is referred to as the Universal Orbital Support System (UOSS). By placing a large asteroid into orbit over earth, a high strength cable can be lowered towards the surface of earth from which a super tall tower can be suspended. Since this new tower typology is suspended in the air, it can be constructed anywhere in the world and transported to its final location. The proposal calls for Analemma to be constructed over Dubai, which has proven to be a specialist in tall building construction at one fifth the cost of New York City construction. Credit (text and image): Clouds Architecture Office.

A skyscraper without a foundation on Earth? The concept makes for a great science fiction backdrop, if nothing else, and calls up images of a building so tall that occupants of its highest floors would look out upon the world from 32000 meters, with near vacuum conditions outside. Solar panels at the top would supply power, with water being supplied and replenished from clouds and rainwater. A transfer station would allow people and goods to move between the orbiting tower and the surface. As for the cost of building such a tower, one prefabricated unit at a time, plugging modules into an extendable core, the firm sees clear skies:

Harnessing the power of planetary design thinking, it taps into the desire for extreme height, seclusion and constant mobility. If the recent boom in residential towers proves that sales price per square foot rises with floor elevation, then Analemma Tower will command record prices, justifying its high cost of construction.

Want to get in on the ground floor? Not me. There’s plenty to question about this operation even if a market did emerge to support it, but the visuals are breathtaking, with spectacular vistas from residential windows aboard the building (craft?) and the futuristic imagery of a skyscraper emerging slowly out of the clouds for those below. Clouds Architecture Office trades off recent space news like the European Space Agency’s study of and landing on Comet 67P/Churyumov–Gerasimenko and NASA efforts at asteroid retrieval, which involve relocating a tiny asteroid to a new orbit. We’re already landing on comets and talking about moving asteroids, right, so why not stretch out the notion that much further? But Analemma Tower is a long, long stretch indeed. 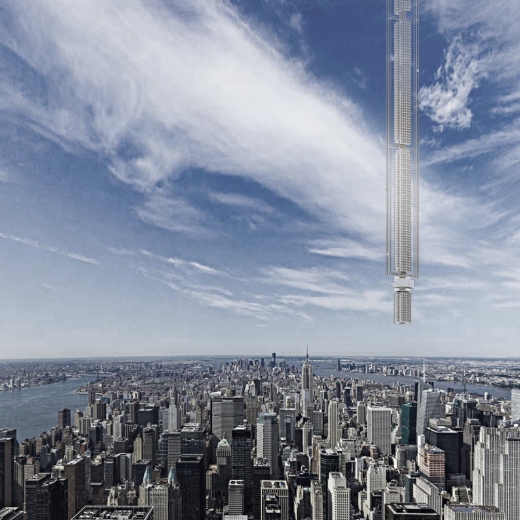 Image: The Analemma Tower as it might appear over New York City. Credit: Clouds Architecture Office.

If it were ever built, the tower would certainly be an unusual place to live. The bottom of the structure is seen as a shopping and dining area. The firm talks about business being conducted above this zone in the lower and middle sections of the tower, with the residential quarters approximately ⅔ of the way up. The sizes and shapes of the windows in the building would change with height because of the pressure and temperature differentials Analemma would experience. Those at the top of the tower would receive an additional 40 minutes of daylight per day because of the curvature of the Earth, says the Clouds Architecture Office website. 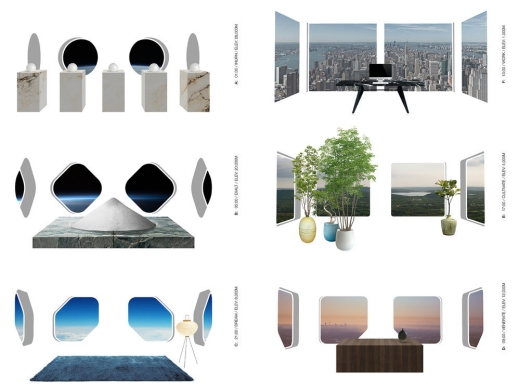 Image: Views through the windows of the Analemma tower, their shapes adapting to conditions outside. Credit: Clouds Architecture Office.

Because Dubai is the home of the world’s tallest building, Burj Khalifa, it is the firm’s choice for construction of the modules that would make up the tower. Exactly how building components would be delivered from the ground to the gradually growing core is not clear. Images of people parachuting past the tower’s windows suggest one quick way to the surface, though hardly one the average business person would be likely to take.

Can we create cables to support such a structure? And what about moving a sizeable asteroid into Earth orbit? NASA’s own plans in its Asteroid Redirect Mission have called for nudging a multi-ton boulder and pushing it into a stable orbit around the Moon, where it could be the destination of a manned mission that would bring samples back to Earth. That’s a $1.25 billion project in itself. The size of the asteroid Clouds Architecture Office is talking about isn’t specified, though it would far exceed the small rock NASA hopes to maneuver.

And consider the point that Sara Chodosh brought up in Popular Science in a piece appropriately titled This building hanging from an asteroid is absurd – but let’s take it seriously for a second. What happens to residents in a building this tall when they need an elevator?

The fastest elevators in the world are in The Shanghai Tower and move at 20.5 meters per second, so a straight shot to the top of the Analemma would take you just over 20 minutes. And that’s assuming there is a single elevator that goes all the way to the top. One of the logistically challenging things about building very tall structures is how you fit in enough elevators… The easiest way around that is to not require all of the elevators to go all the way to the ground (STRIKETHROUGH), er, first floor. You can stack elevator shafts on top of each other and simply have sky lobbies. So maybe you take an elevator from floor 1 to floor 50, then get off and take another from 50 to 100, and so on. Keep in mind that you’ll have to wait for the elevator to come each time, and with thousands upon thousands of residents you’ll probably be waiting a while.

Indeed. But there’s something to be said for black sky dreaming, and I love the visuals here. So while I’m not expecting to see Analemma appearing in the sky over New York any time soon, I do get some of the same buzz from the concept that I find in good science fiction. In fact, Analemma reminds me of some of Alastair Reynolds’ creations, particularly the world he portrays in novels like Chasm City (in his Revelation Space sequence). Chasm City is packed with mile-high skyscrapers, its planet surrounded by the Glitter Band, thousands of orbital habitats, all of which are threatened in the novel.

The people behind Analemma Tower have to be science fiction buffs. So why keep this idea on Earth? Geoffrey Landis has pointed out that at 50 kilometers above the surface of Venus, the pressure is about 1 bar and temperatures range between 0° and 50° Celsius. Here we wouldn’t need to be tethered to an asteroid, but could set up floating colonies in the Venusian clouds, where a human breathable air mixture is itself a lifting gas. Michael McCollum has likewise envisioned floating cities in the atmospheres of the outer gas giants. A skyscraper emerging out of the clouds may indeed be in our future, but I’m not sure Earth will be where we build it.

A note to the readers: Please help me out with further science fiction references on floating buildings/cities. I’m struggling to remember one recent depiction of a floating structure that moved between planet-bound cities — was it in Stephenson’s Seveneves, in the far future section of the novel? If so, I can’t find it. Your help on this is appreciated.

Next post: Where Do We Come From? What Are We? Where Are We Going?