Building the Tools for Icy Moons

With my own memories of the July 4, 1997 landing of Mars Pathfinder at Chryse Planitia as fresh as yesterday, it’s hard to believe that we are looking at the 20th anniversary of rover operations on the planet. But as the Curiosity rover continues its travels and we look toward the Mars 2020 rover mission, we’re also taking a much longer look ahead at the worlds where life may be more likely to be found, the icy moons of Jupiter and Saturn.

Ponder this: Testing at the Jet Propulsion Laboratory is showing that ice grains in conditions like we will encounter on places like Enceladus or Europa can behave like sand dunes. That means fine grains that could stall an improperly designed rover, leading NASA engineers to begin rethinking designs harking back to the early days of Moon exploration, lightweight commercial wheels attached to a flexible chassis, a system that has worked for a variety of missions but will need adjustment for future work. The rovers that use these systems will, in the case of moons like Europa, need serious attention to radiation hardening. 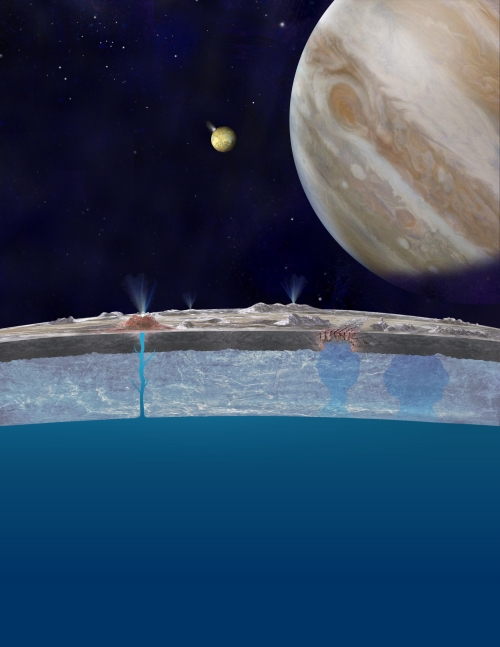 The project looking into extreme environments for these next generation rovers is called the Ocean Worlds Mobility and Sensing study, which is developing prototypes for sample acquisition on icy moons. Working tricky environments like Enceladus means coping with fissures that blow jets of material out into space. And Europa’s challenge goes far beyond Jupiter’s cascading radiation given the need to get through surface ice to sample the subsurface ocean. On Titan, we prepare for a possibly mushy ethane-rich surface.

“In the future, we want to answer the question of whether there’s life on the moons of the outer planets — on Europa, Enceladus and Titan,” says Tom Cwik, who leads JPL’s Space Technology Program. “We’re working with NASA Headquarters to identify the specific systems we need to build now, so that in 10 or 15 years, they could be ready for a spacecraft.”

The Europa work is particularly interesting given the question of astrobiology in the Europan ocean. The biggest problem for designers right now is that we have no certainty about the thickness of the surface ice, which could conceivably extend as deep as 20 kilometers. Richard Greenberg has argued in Unmasking Europa (Copernicus 2008) that the evidence of surface melt-through of Europan ice points to ice as thin as five kilometers. Whatever the case, so-called ‘melt probe’ designs are being scaled up for the challenge.

The JPL work on melt probes is led by Brian Wilcox, who has concluded that the thickness of Europan ice, in comparison with the Earth ices that conventional melt probes have coped with, demands an emphasis on heat efficiency. Wilcox is examining a vacuum-insulated capsule that uses a heat source like plutonium to keep its energy as it sinks into the ice. At one end, a rotating sawblade turns and cuts ever deeper, while pushing ice chips into the body of the probe, where they are melted and pumped out behind it.

The idea is that the water would be sampled in the midst of this process, with some being returned to the surface lander through pneumatic tubing. There it would be checked for biosignatures. And given concerns about possible contamination by Earthly life, Wilcox would heat the probe to almost 500° C during the cruise phase of the flight, thus killing off any residual organisms that may be hitching a ride from Earth.

“We think there are glacier-like ice flows deep within Europa’s frozen crust,” Wilcox said. “Those flows churn up material from the ocean down below. As this probe tunnels into the crust, it could be sampling waters that may contain biosignatures, if any exist.”

This JPL news release offers more, including work on a new generation of robotic arms that will out-reach our Mars rovers, which have never extended beyond about 2.5 meters from the base unit. JPL is looking at a robotic arm with a 10 meter extension, and is also considering a projectile launcher that can fire a sampling mechanism to distances of 50 meters. Having obtained the sample, the device would be reeled in by a tether.

These technologies are designed to be used along with an ice-gripping claw which could have a coring drill attached to it for taking surface samples at locations of interest. The drill would be able to reach about 20 centimeters below the surface ice. The ice claw itself would be deployed from a boom arm and would anchor itself with heated prongs that melt into the ice to secure the unit. It would then penetrate the ice with its drill bit to collect the needed sample. 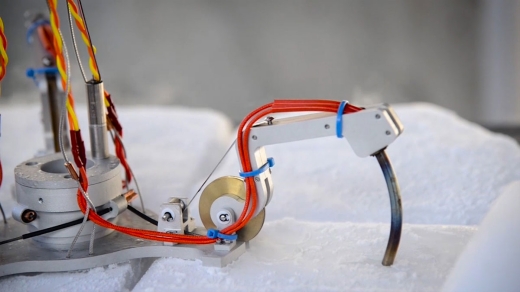 The Ocean Worlds Mobility and Sensing site is sparse at the moment but it’s one you might want to keep an eye on as the effort continues. NASA is considering a second phase of the study that would be tapped as we work out the overall design of any icy moons lander.

Previous post: Where Do We Come From? What Are We? Where Are We Going?