Atmosphere Detected around Super-Earth GJ 1132b

There’s interesting news this morning about planets around M-dwarfs. A team of astronomers led by John Southworth (Keele University, UK) has detected an atmosphere around the transiting super-Earth GJ 1132b. While we’ve examined the atmospheres of gas giants and have detected atmospheres on the super-Earths 55 Cancri e and GJ 3470 b, GJ 1132b is the smallest world yet where we’ve detected one. 39 light years from Earth in the constellation Vela, the transiting planet is 1.4 Earth radii in size, with a mass 1.6 times that of our world.

We’re continuing to move, in other words, into the realm of lower-mass planets when we study planetary atmospheres, an investigation that will be crucial as we look for biosignatures in distant solar systems. With GJ 1132b, we’re dealing with a planet too close to its star to be habitable (it receives 19 times more stellar radiation than the Earth does, and has an equilibrium temperature of 650 K, or 377° C). But finding a thick atmosphere here is encouraging given the level of flare and stellar wind activity on M-dwarfs.

Such activity could strip a planet of its atmosphere in some scenarios, so the survival of atmospheres on planets in the habitable zone of similar stars remains in play. In GJ 1132b, we have a planet whose atmosphere has evidently persisted for billions of years.

The GJ 1132b work was done with the GROND imager attached to the 2.2 m ESO/MPG telescope at La Silla. GROND (Gamma-ray Burst Optical/Near-infrared Detector) is normally used to study Gamma Ray Burst afterglows at seven different wavelengths from the optical to near-infrared, allowing rapid follow-up spectroscopic observations at other telescopes, but it can also be used to study exoplanets as well as optical, X-ray and radio transients.

Using GROND, the researchers could measure the decrease in brightness as the planet’s atmosphere absorbed some of the starlight while passing in front of the star in transit. The team’s intention was to determine the radius of the planet in each of the seven passbands (filters) for which it could obtain transit lightcurves, analyzing the significance of variations between the passbands in terms of atmospheric composition.

The result: The planet appeared larger at some wavelengths than others, an indication of an atmosphere opaque to specific wavelengths while transparent otherwise. The average radius of the planet could be separated out into a surface radius of 1.375 Earth radius overlaid by this atmosphere, which increases the observed radius at the wavelengths mentioned.

Simulating different atmospheres through follow-up work from team members at the University of Cambridge and the Max Planck Institute for Astronomy, Southworth and company found that an atmosphere rich in water and methane fit their observations. As to what the planet’s surface composition might be, two possibilities emerge. From the paper:

So perhaps a rocky world, or perhaps not:

On the other hand, the data are also consistent with a large range of H2O mass fractions between 0% and 100% in our models. In principle, consideration of temperature-dependent internal structure models would lead to larger model radii for the same composition… and therefore could lower the upper limit on the water mass fraction. Nevertheless, the mass and radius of GJ 1132 b allow for a degenerate set of solutions ranging between a purely silicate bare-rock planet and an ocean planet with a substantial H2O envelope. 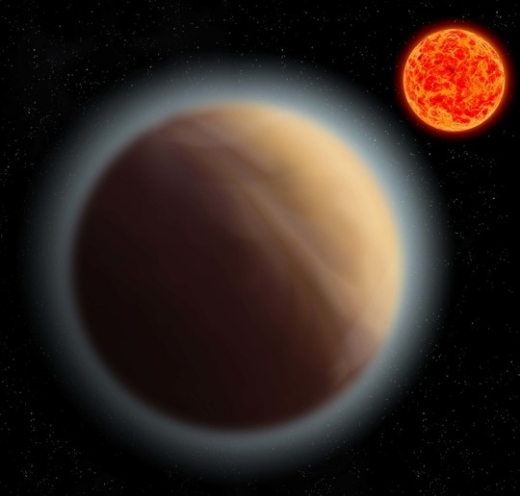 The authors advocate extensive follow-up work on this planet with instruments like the Hubble Space Telescope, ESO’s Very Large Telescope, and the James Webb Space Telescope. In particular, we can begin to delve into the atmosphere here to look for its constituents:

Intermediate-band photometry at 900 nm or bluer than 500 nm would enable finer distinctions to be made between competing model spectra and a clearer understanding of the chemical composition of the planetary atmosphere. The planet’s mean density measurement is also hindered by the weak detection of the velocity motion of the host star, an issue which could be ameliorated with further radial velocity measurements using large telescopes. Finally, infrared transit photometry and spectroscopy should allow the detection of a range of molecules via the absorption features they imprint on the spectrum of the planet’s atmosphere as backlit by its host star.

We’re getting close to the day when improved space- and ground-based installations will allow us to use transmission spectroscopy to look for biosignatures in the atmospheres of planets in the habitable zone of nearby red dwarfs, markers like oxygen, ozone, methane and carbon dioxide in a simultaneous presence that would indicate replenishment by living systems. We’re not there yet, but what we have here is a demonstration that a planet with 1.6 Earth’s mass in a tight orbit of its red dwarf host is capable of holding on to an extensive atmosphere.