NASA is to discuss new findings about ocean worlds in our Solar System in a news conference at 1400 EDT (1800 UTC) on Thursday. The prospects for oceans in the outer system are surprisingly varied, ranging from the strong evidence of a subsurface, salty ocean on Europa to other Jovian moons like Ganymede and Callisto, and of course, Saturn’s intriguing moon Enceladus. Titan is thought to have a salty ocean perhaps 50 kilometers below its ice shell, while there are also possible ocean venues on Mimas, Triton and even Pluto.

The news briefing participants will be:

Further information and a link to view the news briefing can be found here, and the event will also be streamed live on YouTube.

Elsewhere in the Outer System

New Horizons is now in hibernation, a mode that will last until early September. While the spacecraft slumbers, the science and mission operations teams will be working on command loads for the flyby of Kuiper Belt Object MU69, planning for a nine-day encounter with closest approach on New Year’s Day of 2019. We’re now 38.15 AU from the Sun and 5.07 AU from Pluto, moving with a heliocentric velocity of 14.29 kilometers per second. 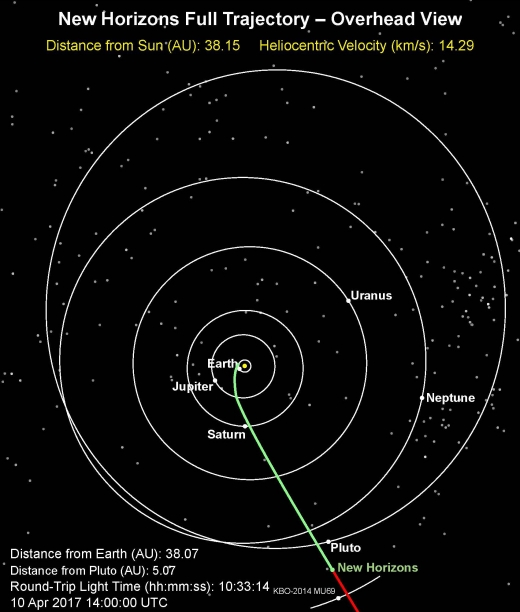 At Ceres, the Dawn spacecraft is in its extended mission and now studying the dwarf planet in a highly elliptical orbit. Later this month, the Sun will be directly behind the spacecraft, when it is at an altitude of about 20,000 kilometers. The strong lighting may help tease out new features about the surface, even as the primary science objective — to measure cosmic rays as part of the analysis of chemical elements near the surface — continues.

We’re also learning more about what appears to be a transient atmosphere around the dwarf planet. A new study points to the Sun as the source of the atmosphere’s intermittent nature. The paper, published in Astrophysical Journal Letters, makes the case that energetic particles from the Sun’s solar wind can free water molecules from the ground, producing an atmosphere, vanishingly thin, that may last for up to a week.

“Our results also have implications for other airless, water-rich bodies of the solar system, including the polar regions of the moon and some asteroids,” says Chris Russell (UCLA), principal investigator of the Dawn mission. “Atmospheric releases might be expected from their surfaces, too, when solar activity erupts.”

If this sounds like cometary behavior, with ice sublimating at the surface as the comet nears perihelion, the paper plays down the idea, noting that the activity does not seem timed to Ceres’ closest approach to the Sun. Lead author Michaela Villarreal (also at UCLA), adds that the team does not believe sublimation can explain the observed exosphere. Earlier detections of an atmosphere on Ceres coincided with higher concentrations of energetic particles from the Sun, and non-detections occurred at lower particle levels.

Thus solar activity rather than Ceres’ orbital position seems to be the cause. This leads to a prediction: Given that the Sun is now in a relatively quiet period that is expected to last for several years, the authors predict that we will see little atmosphere on Ceres during this time. This should be the case even though Ceres is currently getting closer to the Sun.

The evidence for ice on Ceres is strong, with the spacecraft’s gamma ray and neutron detector (GRaND) finding an uppermost surface rich in hydrogen and consistent with water ice; the ice is nearer to the surface at higher latitudes. Dawn has directly detected ice at Oxo crater and in one of the craters that are persistently in shadow in the northern hemisphere. And according to this JPL news release, we know that the shapes of craters and other surface features are consistent with water ice in Ceres’ crust.

The evidence for a faint atmosphere on Ceres preceded Dawn’s arrival in 2015. As far back as 1991, the International Ultraviolet Explorer satellite found hydroxyl emission from Ceres, although no such emissions could be detected the year before. The European Space Agency’s Herschel Space Observatory likewise detected water in the possible atmosphere on three separate occasions, but was unable to find an atmopshere on the fourth attempt. The solar activity theory gives us a way to explain the transient nature of this thin atmosphere.