Investigation of a Possible Dwarf Planet

Astronomical investigations can overlap in extremely helpful ways. Consider the Dark Energy Survey, which examines some 12 percent of the sky in an attempt to learn more about whatever force is accelerating the expansion of the universe. DES is trying to map hundreds of millions of galaxies and identify thousands of supernovae while looking for patterns in cosmic structure, using a 570-Megapixel digital camera, DECam, mounted on the Blanco 4-meter telescope at Cerro Tololo Inter-American Observatory (Chile).

What DES produces are thousands of images — its initial search uncovered 1.1 billion candidate objects, most of which are galaxies or background stars. But among the objects are some that move in successive observations, the signature of objects in our Solar System. David Gerdes (University of Michigan) was able to find what appears to be a dwarf planet within the dataset. Called 2014 UZ224 and informally known as DeeDee (for Distant Dwarf), the object has now been characterized in a new paper from Gerdes and team. 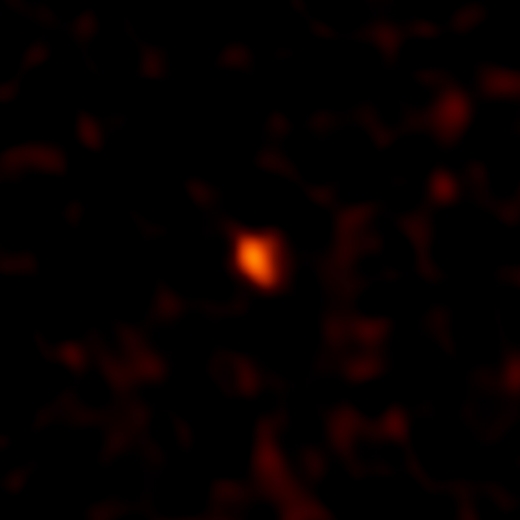 The data behind the paper come from observations using the Atacama Large Millimeter/submillimeter Array (ALMA), a radio telescope installation at about 5000 meters altitude in the Atacama desert of northern Chile. 2014 UZ224 turns out to be about 635 kilometers across, which makes it two-thirds the diameter of Ceres. This should make the object massive enough to be spherical, allowing it to be considered a dwarf planet. It is, in any case, an object in an area thought to be rich in trans-Neptunian objects:

“Far beyond Pluto is a region surprisingly rich with planetary bodies. Some are quite small but others have sizes to rival Pluto, and could possibly be much larger,” says Gerdes. “Because these objects are so distant and dim, it’s incredibly difficult to even detect them, let alone study them in any detail. ALMA, however, has unique capabilities that enabled us to learn exciting details about these distant worlds.”

The object orbits among a population that we are still learning how to categorize. Some trans-Neptunian objects are members of the scattered disk and inner Oort cloud population, reaching well beyond the Kuiper Belt to distances of hundreds of AU. DeeDee is now some 92 AU out in an orbit that would take more than 1100 years to complete (aphelion is at about 180 AU). Sedna, considered to be an extended scattered disc object (E-SDO), is now 86 AU from the Sun (aphelion 936 AU), while Eris is currently at 96.3 AU (aphelion 97.6 AU). The Minor Planet Center currently lists over 2000 objects in the overall category of TNOs. 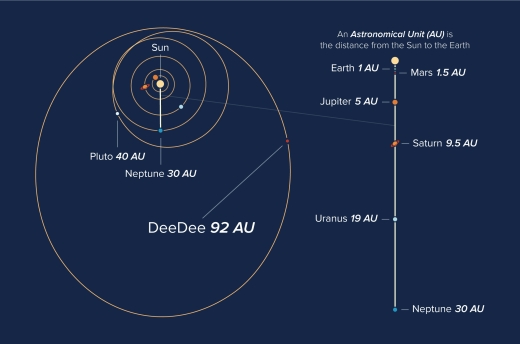 We can expect numerous TNO discoveries ahead, as the paper explains:

The population of detected TNOs is of course strongly biased toward those that are large, near perihelion, and/or have high albedo. Current surveys such as the DES now have the depth and area coverage to discover the counterparts of known objects that are well beyond perihelion. It is also noteworthy that the ALMA facility is easily capable of radiometric detection of a 600 km body at > 90 AU distance. Hence it will be possible to establish sizes and albedos for nearly every body detectable in the visible by DES and similar surveys. As these surveys progress, we will be able for example to determine whether the very high albedo of Eris is characteristic of large bodies at this distance, or whether flux selection has led to the first discovery being atypical.

Working at millimeter wavelengths, Gerdes and his fellow researchers were able to calculate that the surface of DeeDee is at a temperature of 30 Kelvin, not far above absolute zero. The object’s size could be calculated by comparing the ALMA observations to the optical information from DECam and the Blanco instrument at Cerro Tololo. The possible dwarf planet reflects about 13 percent of the sunlight that strikes it based upon its heat signature (according to this NRAO news release, that’s about the same reflectivity as a baseball infield).