Jim Green, who is director of the Planetary Science Division at NASA headquarters, clearly loves his job, and he got so excited during Thursday’s news conference that he kept interchanging Enceladus with Europa in his remarks. Both were in play during the discussion, and the context made it clear what he intended, but I always get a kick out of seeing that kind of enthusiasm showing forth in scientists and academics. It’s a reminder of why they got involved in the first place, and for that matter, what drew me into writing about the field myself.

The news delivered in the press conference and through two new papers involves two older space missions that are driving planning for yet a third, the Europa Clipper mission, a Jupiter orbiter that is still in the design and planning stages. And with Cassini in its final months of operation, it’s fitting that a Cassini flyby through the Enceladus plumes in 2015 should result in what Cassini project scientist Linda Spilker (JPL) called a ‘capstone finding.’ Hydrogen has turned up in the plumes, which turn out to be about 98 percent water vapor and 1 percent hydrogen, with a mix of carbon dioxide, methane and ammonia making up the rest.

Cassini’s Ion and Neutral Mass Spectrometer (INMS) instrument has, in other words, shown us, a potential pointer to what any Enceladus microbes might use to stay alive. For hydrogen must be entering the subsurface ocean because of hydrothermal activity on the seafloor.

We don’t know that life exists here, but provocatively enough, hydrogen can be a source of chemical energy, combining with carbon dioxide dissolved in the apparently abundant water beneath the surface of Enceladus. ‘Methanogenesis’ is the name of this reaction because methane is produced as a by-product. Add to this energy source the fact that we also have carbon, nitrogen and oxygen. If phosphorus and sulfur also exist in that ocean (and the prospects are good), then the case for Enceladus as a venue for life strengthens.

So we have powerful evidence that rock deep inside Enceladus is interacting with hot water. Think back 40 years to the arrival of the Viking landers on Mars and you’ll recall that at roughly the same time, oceanographers were finding unexpected life forms around hydrothermal vents on Earth. Hydrothermal fluids beneath the ocean floor were driving geochemical transformations in which minerals rich in iron react with water to form new minerals. Chris Glein (SwRI) said that the Cassini findings show that geochemistry is likewise active on Enceladus. 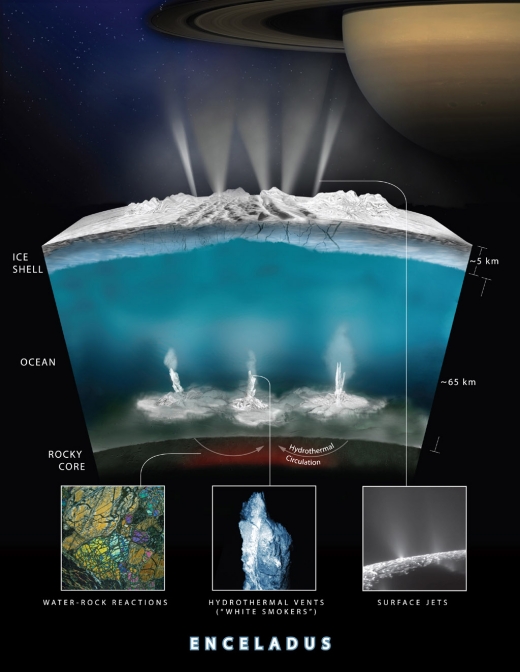 Image: The graphic shows water from the ocean circulating through the seafloor, where it is heated and interacts chemically with the rock. This warm water, laden with minerals and dissolved gases (including hydrogen and possibly methane) then pours into the ocean creating chimney-like vents. The hydrogen measurements were made using Cassini’s Ion and Neutral Mass Spectrometer, or INMS, instrument, which sniffs gases to determine their composition. The finding is an independent line of evidence that hydrothermal activity is taking place in the Enceladus ocean. Previous results from Cassini’s Cosmic Dust Analyzer instrument, published in March 2015, suggested hot water is interacting with rock beneath the ocean; the new findings support that conclusion and indicate that the rock is reduced in its geochemistry. With the discovery of hydrogen gas, scientists can now conclude that there is a source of chemical free energy in Enceladus’ ocean. Credit: NASA/JPL-Caltech/Southwest Research Institute.

It’s an exciting thought, though we don’t know if any parallels to life around Earth’s ‘white smokers’ far below the surface exist. We do know that forms of life can feed on chemical energy rather than sunlight, with that process of methanogenesis combining H with CO2 to produce methane and extract energy out of the process. As Glein pointed out, we’re now looking at the first calorie count in an alien ocean, with life as a geochemical possibility.

An older mission, the Galileo Jupiter orbiter that gave us our best imagery of Europa, accounted for the second discovery announced yesterday. This one was not a complete surprise, as we had already found evidence of a possible plume on Europa through observations from the Hubble Space Telescope. But the 2014 detection of a plume is now bolstered by a 2016 detection. The Galileo data are crucial here because thermal imagery of the area in question, taken by the spacecraft in the 1990s, shows a hot spot, a ‘thermal anomaly,’ as William Sparks (Space Telescope Science Institute) called it. The region also contains surface features that appear to be cracks in the moon’s ice crust.

“The plumes on Enceladus are associated with hotter regions, so after Hubble imaged this new plume-like feature on Europa, we looked at that location on the Galileo thermal map. We discovered that Europa’s plume candidate is sitting right on the thermal anomaly,” said Sparks. 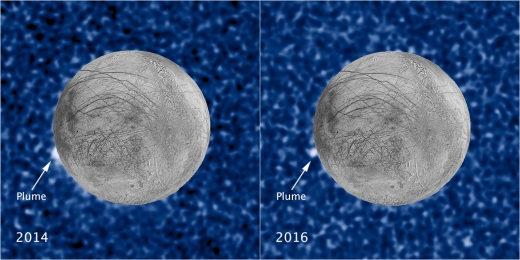 Image: These composite images show a suspected plume of material erupting two years apart from the same location on Jupiter’s icy moon Europa. The newly imaged plume, shown at right, rises about 100 kilometers above Europa’s frozen surface. The image was taken Feb. 22, 2016. The plume in the image at left, observed by Hubble on March 17, 2014, originates from the same location. It is estimated to be about 50 kilometers high. The snapshot of Europa, superimposed on the Hubble image, was assembled from data from NASA’s Galileo mission to Jupiter. Credit: NASA/ESA/W. Sparks (STScI)/USGS Astrogeology Science Center.

Finding a hot spot in the same place as the candidate position for the detected plumes gives us further evidence that the Europan ocean can communicate with the surface, although its activity is not as spectacular as the numerous venting jets we see at Enceladus’ south pole. The new plume rises about 100 kilometers above the Europan surface, about twice as high as the one observed in 2014, and both correspond to the thermal region imaged by Galileo. 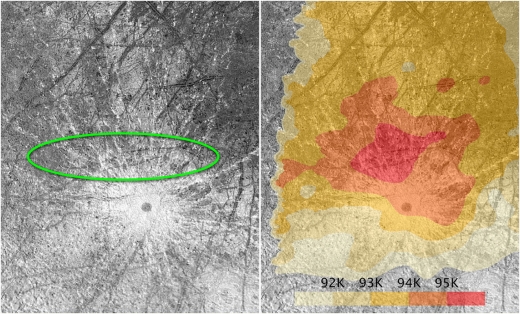 Image: These images of the surface of the Jovian moon Europa, taken by NASA’s Galileo spacecraft, focus on a “region of interest” on the icy moon. The image at left traces the location of the erupting plumes of material, observed by NASA’s Hubble Space Telescope in 2014 and again in 2016. The plumes are located inside the area surrounded by the green oval. The green oval also corresponds to a warm region on Europa’s surface, as identified by the temperature map at right. The map is based on observations by the Galileo spacecraft. The warmest area is colored bright red. Credit: NASA/ESA/W. Sparks (STScI)/USGS Astrogeology Science Center.

Assuming a linkage between the plumes and the warm spot on the surface, researchers believe that liquid water being vented from below the crust could be warming the area around the plume. Another possibility is that water vapor being ejected from the plume falls back to the surface in a mist that changes the structure of local surface grains and lets them retain heat longer than the surrounding regions. We should learn a great deal more with Europa Clipper.

Planned for a launch in the next decade, Europa Clipper can draw on both sets of findings discussed yesterday. We can envision a probe that, like Cassini, can fly through the plumes of a distant moon, hoping to extract information about the ocean beneath. The spacecraft, which will make numerous close flybys of the moon, will carry nine major instruments. Its magnetometer should help us measure the size of the ocean, while ice penetrating radar can help us measure the thickness of the ice. We’ll also use thermal imaging, like Galileo, to look for other hot spots, and learn if there are cracks associated with these regions. Also in the works: A next generation version of Cassini’s Ion and Neutral Mass Spectrometer (INMS) instrument, and an ultraviolet camera to enhance the hunt for plumes.

Thus we learn, by a series of steps each leading to the next, mission building on mission to suggest the scope and shape of the mission to follow. We’re about to lose Cassini, but we lost Galileo in 2003 when it plunged into the atmosphere of Jupiter. Even so, its data continue to inform us how to interpret these new findings. Meanwhile, Hubble observations of Europa using its Space Telescope Imaging Spectrograph (STIS) continue to look for new plume activity. When Europa Clipper flies, it will be designed to answer questions earlier studies have raised.