Deceleration has always been problematic in projected schemes for interstellar travel. A flyby of a star at a substantial percentage of lightspeed yields a fraction of the data that would be obtainable by a probe slowed into orbit in the target system. But how to slow down? In particular, how do you slow down when your method of propulsion is beamed energy?

The ideas have flowed over the years, ranging from Philip Norem’s ‘thrustless turning’ — using interactions between the spacecraft and the interstellar magnetic field — to Robert Forward’s ‘staged’ sail, in which the sail separates into separate components, with beamed laser light from Earth bouncing off one to the other to slow the payload. Norem’s notion, though, hugely lengthened trip times while taking the spacecraft far beyond the target before turning it back, while staged sails require a pointing accuracy in a laser array that is hard to imagine.

Many other options have been advanced, including braking against a stellar wind with a magsail, but it was a recent paper from René Heller (Max Planck Institute for Solar System Research, Göttingen) and German colleague Michael Hippke that got my attention at the beginning of February (see By ‘Photogravitational Assists’ to Proxima b). Heller and Hippke are now joined by Pierre Kervella (CNRS/Universidad de Chile) in a reworking of the original idea with a major twist, a far more effective means of slowing and turning the craft which, in turn, produces much faster travel times because it allows a higher speed upon arrival. 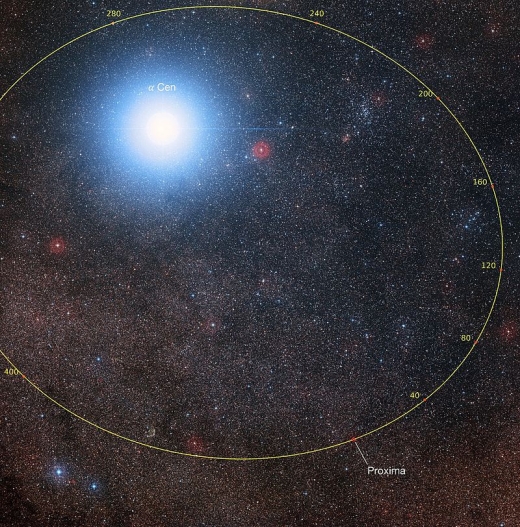 Image: Orbital plot of Proxima Centauri showing its position with respect to Alpha Centauri over the coming millennia (graduations are in thousands of years). The large number of background stars is due to the fact that Proxima Cen is located very close to the plane of the Milky Way. Credit: P. Kervella (CNRS/U. of Chile/Observatoire de Paris/LESIA), ESO/Digitized Sky Survey 2, D. De Martin/M. Zamani –https://www.eso.org/public/images/ann16089a/

The original Heller/Hippke paper fit nicely with the Breakthrough Starshot idea, in that what the latter was proposing was to accelerate small beamed sails up to 20 percent of the speed of light for a flyby of the Proxima Centauri system and its interesting planet Proxima b. Hippke and Heller advocated using the G-class Centauri A and K-class Centauri B as ‘photon bumpers,’ with a much larger lightsail than Breakthrough Starshot envisioned being slowed and having its trajectory altered by photon pressure and gravity, with a final deflection to Proxima Centauri itself, which the craft would approach at a speed slow enough for photon braking into orbit.

The new paper finds a more efficient way of using a star as a photon bumper, one that increases the deceleration at Centauri A and B and thus allows the sail to approach these stars faster. The savings are substantial: Using a modified photogravitational assist as suggested here, we cut the travel time from 95 years to 75 years. You can see that to use these methods, a single star is not optimum. We look instead for multiple systems in which we can use two or more stars to pull off this interstellar bank shot. Intriguingly, it turns out that the Alpha Centauri system may not actually be the closest — in time — for such a mission, but more on that later.

The spacecraft that Heller, Hippke and Kervella have in mind is made of an ultralight material like graphene, which would be coated with “a highly reflective broadband coating made of sub-wavelength metamaterials.” For a Centauri mission, the craft would be brought up to cruise velocity by a close solar pass rather than accelerated through a ground-based laser array, the method being investigated by Breakthrough Starshot. The lightsail would be accelerated to a cruise velocity of 4.6 percent of c. It would use the assist maneuver upon arrival at Centauri A and B and brake into Proxima to achieve a bound orbit around Proxima b.

When using the photon pressure of a star and its gravitational pull to both decelerate and deflect an incoming sail, the key is to find the maximum possible injection speed at the first destination star. Doing that at Alpha Centauri A would allow the necessary flyby and course adjustment at Centauri B, followed by deflection to Proxima. Finding that injection speed has to be factored against reaching the required deflection angle between inbound and outbound trajectories.

The new work introduces follow-up studies to the Heller/Hippke paper that tweak the simulations with a revised concept, one that favors stellar photon pressure over gravity in enhancing the deflection. The result: “we demonstrate that such a photogravitational assist is more effective when the star is used as a bumper (i.e. the sail passes “in front of” the star) rather than as a catapult (i.e. the sail passes “behind”or “around” the star).”

From the paper (note that v∞,max, as discussed below, is the maximum speed of arrival for a successful deceleration and deflection within the Centauri system) : 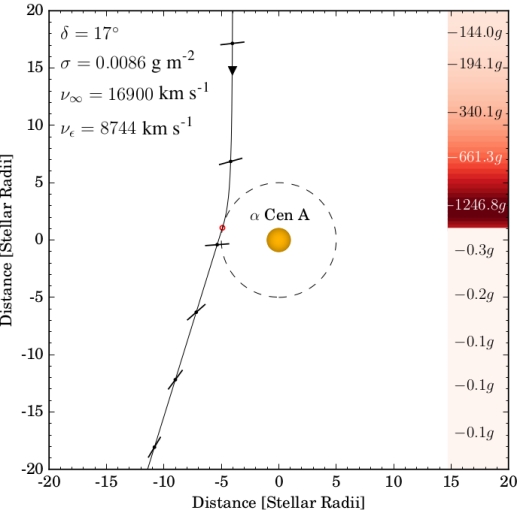 Image: Figure 1 from the paper. Caption: Trajectory of a lightsail performing a photogravitational assist at α Cen A (orange circle). The bar along the trajectory visualizes the instantaneous orientation of the sail determined to maximize the deceleration. The values in the legend denote the deflection angle, the mass-to-surface ratio, the inbound velocity, and the outbound velocity of the sail. The color bar at the right shows the g-forces acting on the sail along the trajectory, where g = 9.81 m s −2 is the acceleration on the Earth’s surface. Credit: Heller, Hippke and Kervella.

The revised work thus changes the original Proxima b mission. Assuming the intent is to brake into the Proxima system for close examination of the planet, then the sail is better oriented so as to avoid maximum deceleration during its encounter with Centauri B. This allows the cruise to Proxima to continue with a residual speed of 1,270 km s-1, which is the maximum speed that can be used to fully brake into the Proxima system. As you can see, the authors must juggle the fastest possible cruise times with the maximum injection speeds.

So we have learned that when the photogravitational assist is made at the same side of the star as the desired deflection, as opposed to a gravitational swing behind the star (the method of the original paper), the injection speed at Centauri A (and thus cruise speed enroute) is increased substantially. The authors’ calculations involving a graphene lightsail show an injection speed (v∞, max) of 17,050 km s-1 for the new method (this works out to 5.7% c, as opposed to the previous 13,800 km s-1, which is 4.6% of c). We get an increase in speed of 24 percent, while we reduce travel times from Earth to Centauri A and B from 95 years to 75 years.

Adding in the travel time to Proxima Centauri after the photogravitational assists at Centauri A and B, we get a total travel time from Earth to a bound orbit in the Proxima Centauri system of 121 years, with the final 1,280 km s-1 absorbed through photon braking at Proxima itself. 46 years, in other words, is needed to go from Centauri AB to Proxima. What a shame we can’t launch such a mission this year, for the alignment in the Centauri system is such that a mission arriving at Centauri AB in 2092 would allow minimum travel times and maximum injection speeds. In 2092 the deflection required by the sail for the AB photogravitational assist is smallest. 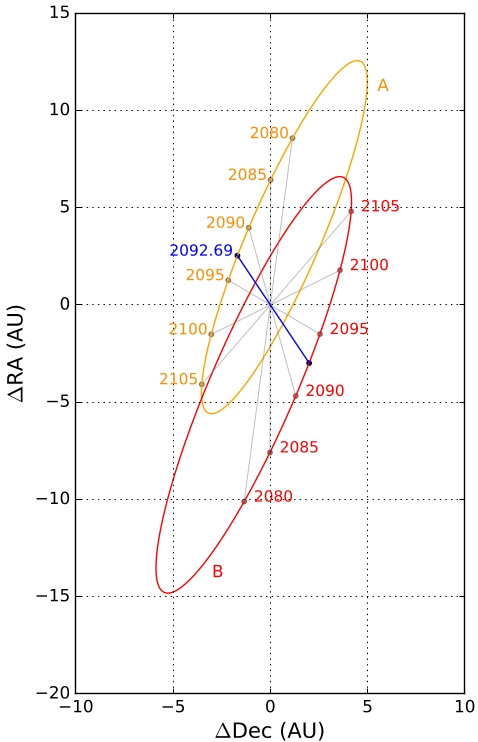 Image: Figure 2 from the paper. Orbital trajectories of α Cen A (orange) and B (red) in their barycentric coordinate system as seen from Earth using differential RA and Dec coordinates. The AB vector at the time of their closest apparent encounter in 2092.69 (8 September 2092) is marked in blue. Credit: Heller, Hippke and Kervella.

It should be clear from all this that to calculate the actual value of the maximum injection speed at Centauri A and B, we need to calculate the deflection angle required by the sail to make the necessary trajectory adjustments. This will be the case in any nearby system to which we hope to apply these methods. And here we find the interesting result that there are systems which could be closer in terms of travel time than Alpha Centauri itself. Tomorrow we’ll return to this paper to look at the possibilities for photogravitational assists to bound orbits in other systems.

Next post: Mission Concepts: Bound Orbits around Other Stars