Can we use a laser array to get a fast probe to another star? Breakthrough Starshot relies upon the notion, which was first advanced by Robert Forward all the way back in 1962, and subsequently considered by George Marx in 1966, along with hosts of researchers since. With beamed energy we leave the propellant behind, but as we’ve seen in our discussions of deceleration, there remains the problem of slowing down at the target. Breakthrough Starshot assumes a flyby, but the paper we looked at yesterday works out strategies for braking into orbit at the target star. Or more accurately, at the target stars, for multiple systems are assumed.

Let’s dig back into that paper today, but first, let me make a brief administrative comment. The upcoming Breakthrough Discuss meeting in Palo Alto (I covered last year’s sessions) occurs at exactly the wrong time for me — I’m locked into long-standing travel plans elsewhere. While I travel, there will be no Centauri Dreams posts for the rest of this week, though I will try to keep up with comment moderation. Things return to normal next Monday.

Now, as to multiple stars and our target list. René Heller, Michael Hippke and Pierre Kervella use multiple stars as ‘photon bumpers,’ depending upon steep deceleration at one or more in order to slow the craft and deflect it on to a final target. Alpha Centauri is the obvious case in point, for using these methods we can consider a probe that brakes into orbit around Proxima b after decelerating encounters with Centauri A and B. The new paper revises a January paper from Heller and Hippke by offering trajectories that provide for faster cruise times. 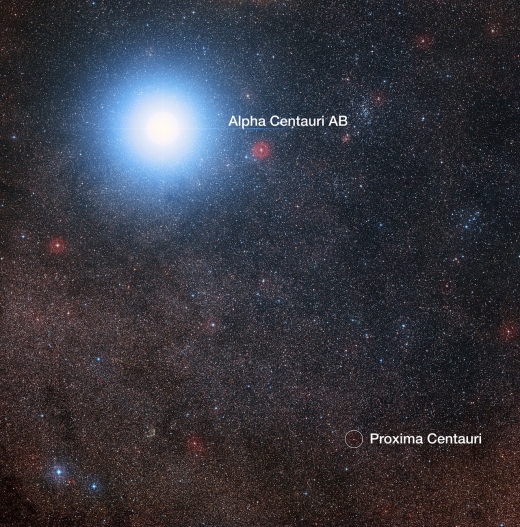 As we saw yesterday, the authors believe they can cut the travel time to Centauri A and B from 95 to 75 years (with an additional 46 years necessary for the crossing to Proxima Centauri). All this depends upon maximizing the arrival speed at the first star while producing enough deceleration through photon braking to make the needed speed and course adjustments. And if this can be done at Alpha Centauri, it can be done with other nearby systems, but we would experience much longer travel times with single stars like Tau Ceti or Epsilon Eridani.

Fortunately, multiple star systems abound, offering interesting possibilities. Having optimized the trajectories for Proxima Centauri, the authors consider Sirius A, which is actually about twice the distance from the Sun as Alpha Centauri. The star is bright enough (24.2 solar luminosities) that maximum insertion speed into the Sirius system can be high, some 12.5% of the speed of light. We get a much faster cruise speed coupled with much more dramatic deceleration, and the travel time of 69 years is actually shorter than our Proxima mission.

Sirius is itself a binary, with a white dwarf, Sirius B, that would be useful to study. The paper’s Table 2 is worth reproducing here, as it broadens the range of targets still further. 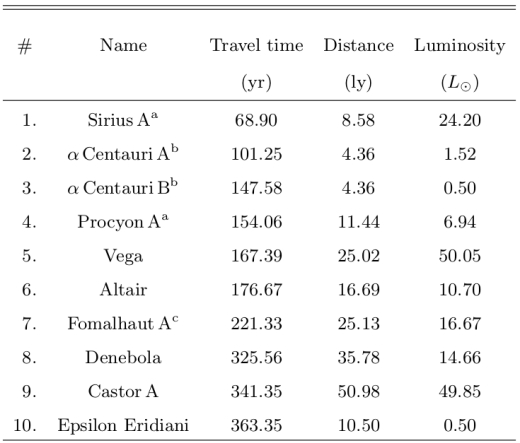 Image: The paper’s Table 2. Caption: An interstellar travel catalog to use photogravitational assists for a full stop. Credit: Heller, Hippke and Kervella.

Notice that Epsilon Eridani is 10.5 light years away, while Sirius A is 8.58 light years distant, but the journey to Epsilon Eridani is a whopping 363 years compared to the 68.9 to Sirius. Here again we’re relying on the innate brightness of Sirius to allow the fast insertion speed that will accommodate maximum cruise velocity plus deceleration and trajectory change at destination — we don’t have this at Epsilon Eridani. But that also presupposes that we have the ability to launch a craft at a blistering 12.5 percent of c. Breakthrough Starshot talks about 20% of c through the use of an Earth-based laser array. For their part, Heller, Hippke and Kervella think a hybrid accelerative boost might be the best approach:

A graphene-class sail could have a maximum ejection speed of about 11,500 km s −1 from the solar system if it was possible to bring it as close as five solar radii to the Sun and then initiate a photogravitational launch (Heller & Hippke 2017). This is much less than the maximum injection speed of 17,050 km s −1 that can be absorbed by successive photogravitational assists at α Cen A to C. If sunlight were to be used to push a lightsail away from the solar system, then its propulsion would need to be supported by a second energy source, e.g. a ground-based laser array, to fully exploit the potential of photogravitational deceleration upon arrival. A combination with sunlight might in fact reduce the huge energy demands of a ground-based laser system.

Lessening the requirements for the array is all to the good considering the challenge of building it and powering it up. Of course, the hybrid approach assumes huge advances in sail materials, though the authors believe that current progress with graphene will make a workable sail for these purposes feasible within the next few decades. However we reach the necessary speeds, we can look at the prospect of even faster speeds with the assistance of other stars.

Which gets us back to Sirius, where the authors consider what they call the ‘Sirius afterburner,’ in which the star becomes the instrument for achieving higher speeds than we can achieve with Earth-based technologies. The authors’ numerical simulations show that minimizing deceleration during approach while maximizing the acceleration after the flyby can increase the velocity of the lightsail up to 27,000 km s-1. That’s a boost of 9 percent of the speed of light. Sirius, then, with its proximity to the Sun and its brightness, becomes what the paper calls “the most natural choice for an interstellar photogravitational hub for humanity.”

Taking that broad view of a possible future is what the paper’s next figure is all about.

A photogravitational hub like this can yield an interesting target list indeed. We have a total of 328 known exoplanet host stars within 316 light years, and many stars of astrophysical interest in themselves. Among these, the authors suggest such destinations as TV Crateris, which is a quadruple system of young T Tauri stars about 150 light years away. 36 Ophiuchi is a triple system of K stars some 19.5 light years out. Also intriguing: Fomalhaut, 25 light years away and another triple, with exoplanet Fomalhaut b and protoplanetary disks around Fomalhaut A (Alpha Piscis Austrini) and C (LP 876-10).

We would like to reach any number of single star targets as well, especially nearby red dwarfs of the sort that we will soon be analyzing for biosignatures, but achieving a bound orbit around such a star would involve extremely long travel times. A flyby more like the basic Breakthrough Starshot concept seems to make more sense for these because unlike Proxima Centauri, they have no nearby bright stars to slow the incoming craft and alter its trajectory.

The paper is sanguine about the prospects for developing the needed technologies for the missions examined herein. Components currently under development include:

…procedures for the large-scale production of graphene sheets, nanowires with the necessary electronic properties consisting of single carbon atom layers, gram-scale cameras and lasers (for communication between the sail and Earth), or sub-gram-scale computer chips required to perform on-board processing etc. We thus expect that a concerted effort of electronic, nano-scale, and space industries and research consortia could permit the construction and launch of ultra-light photon sails capable of interstellar travels and photogravitational assists, e.g. to Proxima b, within the next few decades.

Making any of these missions happen, though, demands the highest degree of aiming accuracy, which we lack even for the Alpha Centauri stars (and bear in mind that Gaia will not observe Centauri A or B). To pull off a successful ‘bank shot’ in the Centauri system, we will have to nail the proper motion and binary orbital motion of the AB binary. Right now our data are simply not sufficient: The authors note that we lack the current capability to achieve orbital injection and swing-by to Proxima, something that will have to be remedied through highly precise astrometry.