What to make of Fergus Simpson’s new paper on waterworlds, suggesting that most habitable zone planets are of this type? If such worlds are common, we may find that most planets in the habitable zones of their stars are capable of evolving life, but unlikely to host technological civilizations. An explanation for the so-called ‘Fermi Paradox’? Possibly, but there are all kinds of things that could account for our inability to see other civilizations, most of them covered by Stephen Webb in his If the Universe Is Teeming with Aliens … Where Is Everybody? (2nd ed., Springer 2015), which offers 75 solutions to the problem.

Simpson (University of Barcelona) makes his case in the pages of Monthly Notices of the Royal Astronomical Society, arguing that the balance maintained by a planetary surface with large amounts of both land and water is delicate. The author’s Bayesian statistical analysis suggests that most planets are dominated either by water or land, most likely water. Earth may, then, be something of an outlier, with most planets over 90 percent covered in water. 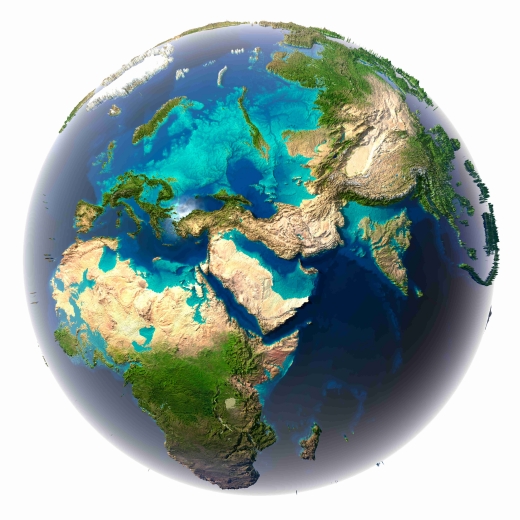 Image: Continents on other habitable worlds may struggle to break above sea level, like much of Europe in this illustration, representing Earth with an estimated 80% ocean coverage. © Antartis / Depositphotos.com.

The unlikelihood of a planet maintaining a balance like the Earth’s gives the paper its direction. Simpson offers a pedagogical example of the Bayesian approach:

…imagine that you look at a kitchen worktop and notice some spilled coffee granules. One of those granules, selected at random, is found to lie within 0.1 mm from the edge of the 600 mm worktop. This proximity could of course be entirely coincidental. But it is much more likely that the bulk of the granules fell on the floor, and what you are seeing is merely the tail end of the distribution.

Is planet Earth at the tail end of the distribution? We don’t have enough exoplanet data to know. But the statistical model here does take note of what we have learned in our explorations of the outer Solar System. Think of Titan, where Stanley Dermott and Carl Sagan predicted in 1995 that instead of a surface covered in extensive ocean, the lack of circularization of the moon’s orbit from oceanic tidal effects pointed to a largely dry surface. We now know that the duo was correct: Titan’s liquid hydrocarbons account for about 1 percent of the total surface area.

Simpson finds this a remarkable call, but he adds that the prediction could have been made even without orbital data on Titan. Let me quote him on this, as it reiterates his method:

On a purely statistical basis, and in the absence of correlations, one expects the division of liquid and solid surface areas to be highly asymmetric. This is because the volume of liquid need not match the capacity of perturbations in the solid. The two quantities often differ by several orders of magnitude. If it is the liquid that dominates, the solid surface becomes completely immersed. Enceladus and Europa offer exemplary cases of this phenomenon. Beneath each of their icy crusts, a single ocean completely envelops a solid core (Kivelson et al. 2000; Waite et al. 2009). If, on the other hand, the liquid’s volume is subdominant, it settles into small disconnected regions, as was found to be the case on the surface of Titan.

To put this in context, we need to consider the delivery of water from icy objects originating beyond the snow line. Here we have to assume a huge variety of outcomes, planets in the habitable zone with a wide variation in the amount of water delivered to the surface. What happens over time? Some water will be found in the mantle, some lost through the upper atmosphere. Planetary topography shapes the distribution of resulting oceans.

The author goes on to consider feedback mechanisms including erosion and soil deposition as well as the deep water cycle by way of placing what happened on Earth in context. Across the galaxy, trillions of dice have been rolled, comments Simpson, and what we would like to know is whether the dice somehow favor a balance between land and water. He thinks not.

Here the anthropic principle weighs in. Does our Earth have the particular balance of water and land we see because planets without this balance — desert worlds or waterworlds — would produce intelligent land-based species at a much lower rate? In other words, if we did not live in a place with this fine-tuned balance, we wouldn’t be observers, something we should keep in mind as we consider the prevalence of worlds like our own. We can also assume that planets with larger habitable areas are more capable of sustaining larger populations. These factors imply to Simpson that the Earth has a greater habitable area than most life-bearing worlds.

We see a planet that could not be otherwise for us to be here, and assume other habitable zone worlds are similar. Our planet, argues the author, is itself close to the waterworld limit, and the water mass fraction among habitable planets could be a good deal higher. From the paper:

…numerical simulations based on delivering water from planetary embryos found a median water mass fractions of approximately 1 per cent (Raymond et al. 2007), 10 times higher than the terrestrial value. Extremely elevated water compositions have been associated with the inflation of planetary radii (Thomas & Madhusudhan 2016). This scenario, in which the Earth is among the driest habitable planets, could help explain the appearance of a low-mass transition in the mass–radius relation of exoplanets (Rogers 2015; Chen & Kipping 2017).

And if it turns out that the Earth is unusually dry for a habitable zone planet, various mechanisms can explain the result. It is possible that low eccentricities and inclinations of planetary orbits in our Solar System make for less effective water delivery. Perhaps water delivery was affected by migration of the gas giants (Simpson considers the ‘Grand Tack’ model in which Jupiter reversed its migration, but points out that this might also produce a higher rate of water delivery). Or perhaps we have a drier Earth simply because of the stochastic nature of the delivery of water. The trillions of dice throws gave us the numbers we live with and take to be commonplace. We can hardly, then, take the Earth as the norm.

71 percent of Earth is covered by water. In addition to the amount of water delivered (and the mechanisms of that delivery), we have to factor in where it will be stored, how ocean and mantle interact, and how topographical features affect water distribution. Life has been able to emerge and technological civilization take hold because all these factors prevent the planet from becoming a waterworld, a fine balance, says Simpson, that most habitable zone worlds lack.

Simpson’s paper is an intriguing read and one that should provide fodder for science fiction scenarios (I consider that all to the good), but it’s highly speculative given that our models of water delivery in the early Solar System are still works in progress. What we come back to again and again is the need for observation. In the Titan reference Simpson makes early in the paper, it was data that proved the point made by Dermott and Sagan, and data that are required to put such factors as the depth of Earth’s water basins in a cosmic context. So we can keep waterworld theories in mind as we begin studying the actual atmospheric content of exoplanets within coming decades, when new space- and ground-based resources come online.

The paper is Simpson, “Bayesian evidence for the prevalence of waterworlds,” Monthly Notices of the Royal Astronomical Society 468 (3) (2017), 2803-2815 (full text). Thanks to Phil Tynan for an early pointer to this paper.