I have a special enthusiasm for microlensing as a means of exoplanet discovery. With microlensing, you never know what you’re going to come up with. Transits are easier to detect when the planet is close to its star, and hence transits more frequently. Radial velocity likewise sends its loudest signal when a planet is large and close. Microlensing, detecting the ‘bending’ of light from a background object as it is affected by a nearer star’s gravitational field, can turn up a planet whether near to its star or far, and in a wide range of masses. It can also be used to study planetary populations as distant as the galactic bulge and beyond.

Now we have news of a cold planet about the size of the Earth orbiting what may turn out to be a brown dwarf, and is in any case no more than 7.8 percent the mass of our Sun. Is this an object like TRAPPIST-1, the ultra-cool dwarf star we’ve had so much to say about in recent days as investigations of its 7 planets continue? If so, the planet OGLE-2016-BLG-1195Lb is in no way as interesting from an astrobiological point of view. It’s probably colder than Pluto. It is also the lowest-mass planet ever found using the microlensing technique. 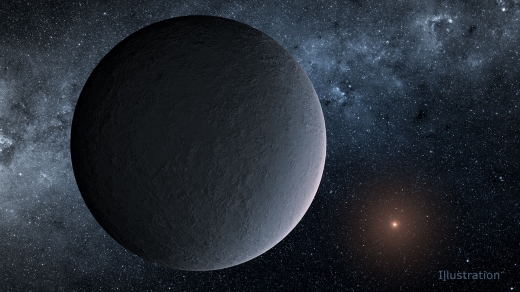 But don’t think this frigid world, about 13000 light years away, doesn’t have its uses. It is part of an ongoing investigation into the distribution of planets in the galaxy. The OGLE designation signifies the ground-based Optical Gravitational Lensing Experiment survey, run by the University of Warsaw, which alerted astronomers to the initial microlensing event. The authors of the study on OGLE-2016-BLG-1195Lb then used the Korea Microlensing Telescope Network (KMTNet) as well as the Spitzer space telescope to study the outcome.

With this planet, we are at the lowest end of what microlensing can detect with current methods. We’ll need to get to NASA’s upcoming Wide Field Infrared Survey Telescope (WFIRST) to begin finding smaller bodies than this. Tuning up the method will be useful as we work on understanding how planets are distributed in the Milky Way, since microlensing can find planets at distances far beyond the capabilities of other detection methods. Specifically, will we find a difference in the planet populations of the Milky Way’s central bulge as compared to its disk? OGLE-2016-BLG-1195Lb is a member of the disk population.

“Although we only have a handful of planetary systems with well-determined distances that are this far outside our solar system, the lack of Spitzer detections in the bulge suggests that planets may be less common toward the center of our galaxy than in the disk,” says Geoff Bryden, astronomer at JPL and co-author of the study.

Let’s dig a little deeper, though, into planet formation around ultracool stars. A 2007 paper by Matthew Payne and Giuseppe Lodato looked at the core accretion method of planet formation in the context of very low mass stars and brown dwarfs, arguing that if such objects have protoplanetary disks in the range of several Jupiter masses, then Earth-mass planets should be frequent around them, typically at about 1 AU from the star. But if brown dwarf disks contain less than a Jupiter mass of material, then they probably cannot form a planet.

The OGLE-2016-BLG-1195Lb paper runs through the scholarship, including a 2013 study from Daniel Apai showing that disks occur as frequently around ultracool dwarfs as around Sun-like stars. And a 2016 paper from Leonardo Testi and colleagues found evidence for dusty disks around 11 of 17 young brown dwarfs studied. A Herschel study from Sebastian Daemgen and team, likewise in 2016, found that half of the ultracool dwarf disks it examined were of at least one Jupiter mass.

So we’re making progress at learning about planet formation in ultracool environments, and here again microlensing comes to the fore. Stars this faint, and their even fainter planets, are a tough challenge for most planetary detection methods, though four have been found with direct imaging. Microlensing does not rely on light from the system being studied, but it can give us information about the planetary and stellar masses involved. And indeed, we have four previous microlensing events that have found planets around ultracool dwarfs.

Two of these previous microlensing detections show planets as small as a few Earth masses, and OGLE-2016-BLG-1195Lb lowers the detected mass still further. From the paper:

These [previous discoveries] suggest that the protoplanetary disks of ultracool dwarfs have sufficient mass to form terrestrial planets, as also hinted at by direct imaging of such disks. The location of these planets, at about 1 AU, support planet formation predictions. However, since the sensitivity of current microlensing surveys for systems with such small mass ratios is very narrow, around projected separations of ∼1AU, they cannot set strong constraints on the presence of planets elsewhere around ultracool dwarfs, such as the much closer separations seen in the TRAPPIST-1 system.

Small planets may be common around ultracool dwarfs, an idea that previous microlensing discoveries reinforce, along with the work on protoplanetary disks and the seven planets orbiting TRAPPIST-1. As to our expectations regarding planets in the galactic bulge as opposed to the disk, the jury is still out. The planets Spitzer has thus far found in its microlensing campaign for the galactic distribution of planets are all located in the disk. We have two upcoming Spitzer microlensing campaigns, one this year and one next, which should offer additional insights. The key question: Is the galactic bulge deficient in planets?

The paper is Shvartzvald et al., “An Earth-mass Planet in a 1-AU Orbit around an Ultracool Dwarf,” accepted at Astrophysical Journal Letters (preprint).