Cassini: Back into the ‘Big Empty”

Cassini’s final months are stuffed with daring science, the kind of operations you’d never venture early in a mission of this magnitude for fear you’d lose the spacecraft. With the end in sight for Cassini, though, ramping up the science return seems worth the risk. And while diving through the narrow gap between Saturn and its rings seems to be asking for trouble, the results of the first plunge on April 26 show that the region is more dust-free than expected.

“The region between the rings and Saturn is ‘the big empty,’ apparently,” says Cassini Project Manager Earl Maize of NASA’s Jet Propulsion Laboratory in Pasadena, California. “Cassini will stay the course, while the scientists work on the mystery of why the dust level is much lower than expected.” 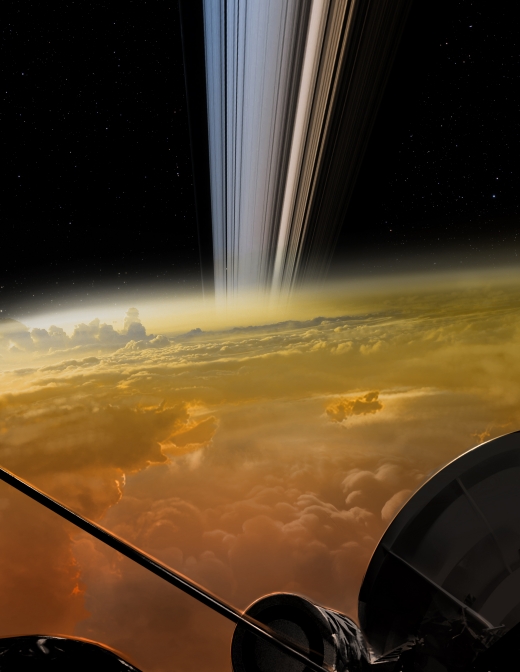 Image: This artist’s concept shows an over-the-shoulder view of Cassini making one of its Grand Finale dives over Saturn. Credit: NASA/JPL-Caltech.

The region between Saturn and its rings was thought, based on previous models of the ring particle environment, to be free of large particles that could cripple the spacecraft. But it seemed prudent to rotate Cassini so its 4-meter antenna became a ‘bumper’ of sorts that could shield its scientific instrumentation during the dive. Such changes in orientation affect how the spacecraft takes data.

In fact, as we see in this JPL news release, Cassini’s Radio and Plasma Wave Science instrument and its magnetometer were the only two science instruments whose sensors were not in the shadow of the antenna in the first dive. It was the RPWS instrument that measured the particle count during the crossing of the ring plane and found only a few scattered hits.

“It was a bit disorienting — we weren’t hearing what we expected to hear,” says William Kurth, RPWS team lead at the University of Iowa, Iowa City. “I’ve listened to our data from the first dive several times and I can probably count on my hands the number of dust particle impacts I hear.”

Image: This video represents data collected by the Radio and Plasma Wave Science instrument on NASA’s Cassini spacecraft, as it crossed through the gap between Saturn and its rings on April 26, 2017, during the first dive of the mission’s Grand Finale. The instrument is able to record ring particles striking the spacecraft in its data. In the data from this dive, there is virtually no detectable peak in pops and cracks that represent ring particles striking the spacecraft. The lack of discernible pops and cracks indicates the region is largely free of small particles. Credits: NASA/JPL-Caltech/University of Iowa.

The particles the craft did encounter were no more than 1 micron across, about the size of particles you would find in smoke. Now we have another ring plane crossing today at 1538 EDT (1938 UTC), during which Cassini will be out of contact during closest approach to Saturn. We’ll get data return on May 3. After today, 20 ring dives will remain, with four of them passing through the innermost fringes of the rings and demanding the use of the antenna as shield. But the low dust level means that most dives will not need the shield configuration. 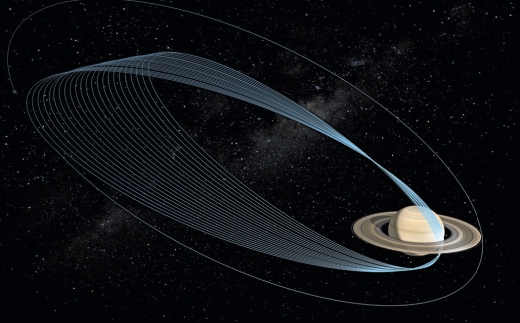 Image: Cassini will perform 22 orbits of Saturn during the Grand Finale. Credit: NASA/JPL-Caltech.

Each of the so-called Grand Finale orbits takes about six and a half days to complete, with the spacecraft’s speed at closest approach to Saturn in each orbit ranging from 35 to 33.6 kilometers per second. This second orbit in the series gives Cassini’s imaging cameras (its Imaging Science Subsystem) a chance to observe the rings at extremely high phase angles while the Sun is directly behind Saturn — this should allow small features like ‘ringlets’ within the rings to be observed. The spacecraft will come within 2930 kilometers of the 1-bar level in Saturn’s atmosphere while passing some 4780 kilometers from the inner edge of the D ring.

Next post: Early System Evolution: The Disks around Epsilon Eridani