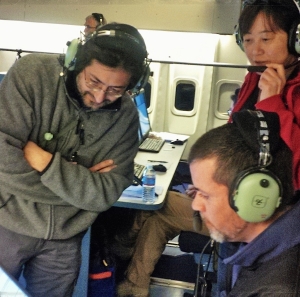 Nine years ago in a piece titled Asteroid Belts, Possible Planets Around Epsilon Eridani, I discussed work that Massimo Marengo was doing on the nearby star, examining rings of material around Epsilon Eridani and considering the possibilities with regard to planets. Marengo (now at Iowa State University) has recently been working with Kate Su (University of Arizona) and other colleagues, using the SOFIA telescope (Stratospheric Observatory for Infrared Astronomy) to help us refine our understanding of the evolving planetary system.

The researchers used the 2.5-meter telescope aboard the Boeing 747SP jetliner to collect data about the star, working at 45,000 feet in a region above most of the atmospheric water vapor that absorbs the infrared light being studied. Epsilon Eridani is a bit over 10 light years from the Sun, and about a fifth of its age, meaning we have close at hand a stellar system that can help us understand what our own Solar System was like in its youth.

The new paper confirms Marengo’s earlier findings that there are separate inner and outer disk structures, with the possibility that the inner disk is itself made up of more than one debris belt. Says Marengo:

“This star hosts a planetary system currently undergoing the same cataclysmic processes that happened to the solar system in its youth, at the time in which the moon gained most of its craters, Earth acquired the water in its oceans, and the conditions favorable for life on our planet were set.” 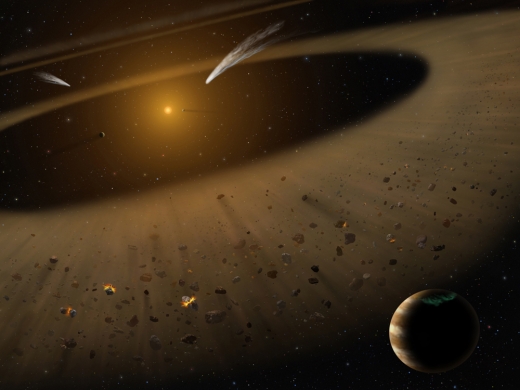 This is fine-grained work, for it requires the astronomers to separate the faint emission of Epsilon Eridani’s circumstellar disk from the bright light of the host star. But when Marengo likens the work with SOFIA to using a time machine, he has an obvious point. Debris disks result when belts of planetesimals are perturbed by newly formed planets, creating collisions that over time break the minor bodies down into dust. We know of more than 400 debris disks around other stars, but we have few systems close enough to study at high resolution. Moreover, what the paper describes as the two benchmark nearby debris disks are around A-class stars, Fomalhaut and Vega. Epsilon Eridani gives us a star much more like the Sun.

Debris disks, which can include rocky and icy bodies as well as gas and dust, can be broad, continuous disks or they can become concentrated into belts of debris. Here the analogy is to our own Solar System’s asteroid belt and Kuiper Belt, two distinct regions with one disk of debris concentrated beyond the orbit of Mars and the other beyond the orbit of Neptune. With an outer cold disk and a warm inner one assumed, the new work focuses on the inner disk. Here there are two different models for how the inner disk is formed, with implications for planets.

One model calls for an inner disk made up of two narrow rings of debris, with one ring roughly at the position of our asteroid belt around the star, and the other at a region corresponding to the orbit of Uranus. The other model sees the inner disk region being populated by dust from the outer, Kuiper Belt-like region, with material inflowing into the inner disk. The latter model assumes a single broad disk in the inner system as opposed to two belt-like rings. The new SOFIA observations favor the narrow belt model rather than a broad continuous disk.

Combining data from SOFIA with earlier Spitzer observations, the researchers found that excess emissions in the inner 25 AU region around the star are the result of a dust-producing planetesimal belt, and perhaps more than one. For it turns out that the resolution achieved by the SOFIA data was insufficient to determine whether the inner disk is itself divided into more than one narrow belts, but it did allow the team to rule out the possibility that the inner region’s warm emissions were the result of dust grains pulled in from an outer, much colder belt.

That favors the first model. The paper makes the case that in the absence of dust grains being dragged in from the cold outer belt, a planet might be necessary to explain what is seen in Epsilon Eridani’s inner disk structure. From the paper:

The observed profiles are not consistent with the case dominated by dragged-in grains (uninterrupted dust flow from the cold Kuiper-belt-analog region) as proposed by Reidemeister et al. (2011). This might suggest the need of a planet interior to the 64-au cold belt to maintain the inner dust-free zone, or a very dense cold belt where the intense collisions destroy the dust grains before they have enough time to be dragged in. In either case, some amount of dragged-in grains from the cold belt can still contribute a fraction of the emission inside 25 au; the exact amount remains to be determined by future high spatial resolution. 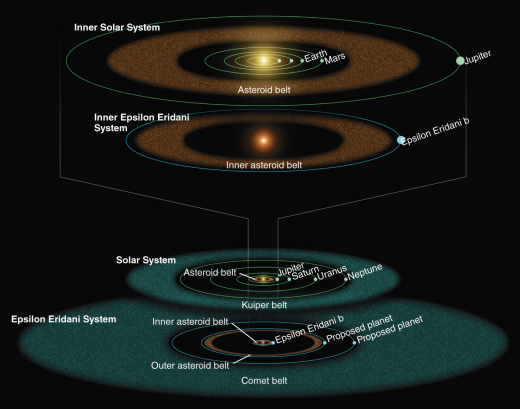 Image: Illustration based on Spitzer observations of the inner and outer parts of the Epsilon Eridani system compared with the corresponding components of our Solar System. Credit: NASA/JPL/Caltech/R. Hurt (SSC).

What we do have, though, is confirmation that we have at least one inner disk, and that it is near the orbit of the Jupiter-class planet that circles the star at a distance comparable to Jupiter’s from the Sun. Kate Su explains:

“The high spatial resolution of SOFIA combined with the unique wavelength coverage and impressive dynamic range of the FORCAST camera allowed us to resolve the warm emission around eps Eri, confirming the model that located the warm material near the Jovian planet’s orbit. Furthermore, a planetary mass object is needed to stop the sheet of dust from the outer zone, similar to Neptune’s role in our solar system. It really is impressive how eps Eri, a much younger version of our solar system, is put together like ours.”