Some years back I had the pleasure of asking Lou Friedman about the solar sail he, Bruce Murray and Carl Sagan championed at the Jet Propulsion Laboratory in the 1970s. NASA had hopes of reaching Halley’s Comet with a rendezvous mission in 1986. Halley’s closest approach that year would be 0.42 AU, but the comet was on the opposite side of the Sun from the Earth, making ground viewing less than impressive. Although the JPL mission did not fly, the Soviet Vega 1 and Vega 2 conducted flybys and the European Space Agency’s Giotto probe, as well as the Japanese Suisei and Sakigake, made up an investigative ‘armada.’

But the abortive NASA concept has always stuck in my mind because it seemed so far ahead of its time. Friedman acknowledged as much in our short conversation, saying that while the ideas were sound, the solar sail technology wasn’t ready for the ambitious uses planned for it. Friedman, of course, would go on to become a founder of The Planetary Society and its long-time executive director, championing sail concepts like Cosmos 1 and the LightSail 1 and LightSail 2 spacecraft. He’s also the author of one of the earliest books on this form of propulsion, Starsailing: Solar Sails and Interstellar Travel (Wiley, 1988). 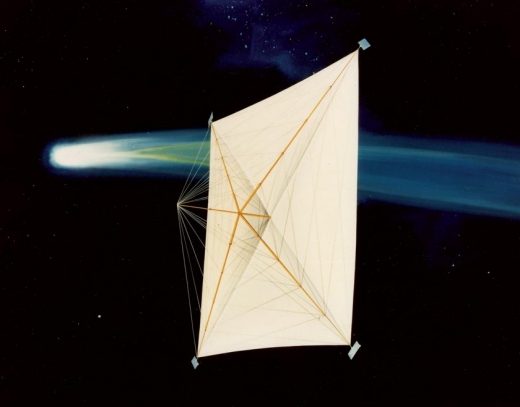 Starsailing is a slim but compelling book that should be on your shelf if you’re interested in these concepts and their history. Although out of print, it’s readily available through Amazon or eBay sellers. Meanwhile, The Planetary Society’s Jason Davis has made a cache of documents from engineer Carl Berglund available that cover many details of the mission. The self-deprecating Berglund, who refers to himself as a only a ‘cog engineer’ at JPL, joined the project at about the same time that Carl Sagan displayed a model of a solar sail on The Tonight Show, and while he only spent several months working on the sail, his JPL documents remind us just how ambitious the JPL concept had become.

Not one but two designs were under consideration, the first a square sail 850 meters to the side. Bear in mind that JAXA’s IKAROS sail, the largest we’ve yet deployed in space, runs 14 meters to the side. A second design was a heliogyro, a device with long blades aptly described by Davis as looking like “two ceiling fans stacked on top of each other.” There would be 12 sail blades in all, 6 per level, and here the dimensions really are staggering. Each blade was to be 8 meters wide and 6.2 kilometers long, making for 0.6 square kilometers of sail material in a spinning blade configuration that would complete a rotation every 200 seconds.

Let’s take a closer look at that heliogyro, as it’s a design we’ve yet to see in space. In a summary document written in early 1977, Friedman describes the concept this way:

The Heliogyro presents a large reflective area to create the Solar Sail by the use of very long, thin blades, much like helicopter blades, which are used both to reflect the solar pressure and to control the vehicle. The basic concept is to spin the vehicle and to use the centrifugal force to support and stiffen the blade, and to keep it flat relative to the Sun. The spin of the vehicle also aids in the deployment of the Heliogyro blades. In addition, the blades can be pitch controlled, as with a helicopter, in order to provide attitude control and to turn the vehicle so that the reflective plane can have different orientations with respect to the Sun. Thus, the vehicle can either fly in toward the Sun or fly out into the Solar System. 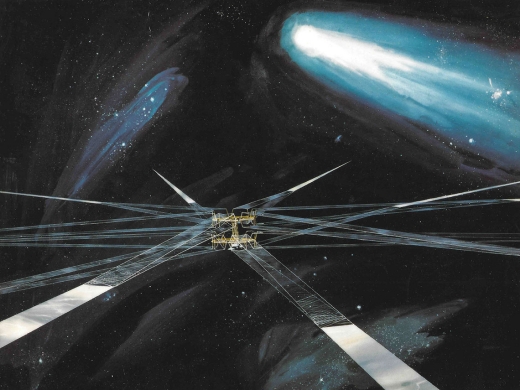 The document depicts a deployment in which the blades unroll from their storage rollers with the help of spin thrusters that are jettisoned after the first 100 meters. After this, solar torque on the blades continues to spin up the vehicle and, over the course of a two-week period, each of the blades unfurls to its full six-kilometer length. Friedman sees the major advantage of the heliogyro as being the support provided by its centrifugal spin, which eliminates the need for a stiffening structure and provides for higher performance than a square sail. The major uncertainty: The dynamics of a 6 kilometer long spinning blade in deep space.

As to sail materials, Friedman describes blades “made out of .1 mil plastic material, with a surface density of less than 4 grams per square meter,” with surface coatings on the back to allow the sail to work at high temperatures close to the Sun. An internal newsletter from Friedman on April 13 of 1977 looks at materials requirements and notes three film candidates: Kapton, Ciba-Geigy polyimid and PBI conformal coated with parylene. These films were specified in the 1.5 to 2.5 µm range in thickness. By way of comparison, the later IKAROS sail was made of a 7.5-micrometer thick sheet of polyimide with thin-film solar cells.

Whichever sail design got the nod, the plan was to launch from the Space Shuttle followed by an inward spiral toward the Sun to about 0.25 AU, after which the sail would leave the ecliptic as it reached speeds in the range of 55 kilometers per second, eventually matching the trajectory of Halley’s Comet in 1986. The sail would be jettisoned at the comet, allowing the craft to use maneuvering thrusters for its operations there, which were to include a landing on the comet itself at the end of the mission.

The heliogyro option ended up winning the competition over the square sail, but sail concepts themselves lost out to solar electrical power, an ion propulsion technology like that used in the Dawn spacecraft. But funding problems and a slower than expected Space Shuttle mission schedule brought all thoughts of a Halley’s Comet mission from NASA to an untimely end.

Friedman writes in Starsailing that in the 1977 to 1978 period, the JPL team produced its design study for the mission with the help of half a dozen industrial contractors and support from the NASA Ames and Langley research centers. It was solid work that showed how viable solar sailing could be as a method of propulsion. He also describes the outcome of the Halley’s mission design:

Despite the confidence of the technical team and the completion of a valid preliminary design, however, the NASA management was conservative. They felt the design and implementation could not be accomplished in time for a 1981 launch to Halley’s Comet. NASA also thought that the technology for solar sailing was not sufficiently ‘mature’ to be implemented on a near-term space project. Indeed, the Halley mission requirements were severe — and even our willingness to incur great risk for great gain was insufficient to overcome management’s skepticism. And as it turned out, the conservatives were right, we could not have done it. It was a self-fulfilling prophecy.

But what splendid work fleshing out solar sail concepts that we continue to explore and find viable. As mentioned above, The Planetary Society’s Lightsail 2 carries the idea forward, and may become the second solar sail to demonstrate controlled flight in space. JAXA, meanwhile, has plans for an IKAROS follow-on mission to study the Jupiter Trojans.

All of that helps us keep the documents Jason Davis has collected online in perspective, a valuable look at work that has contributed to our understanding of a key propulsion concept. Looking through these documents reminds me of days I spent in 2003 going through the Robert Forward notebooks stored at the University of Alabama at Huntsville. That sense of history in the making — or in this case, history that might have been — is palpable as we consider who developed these documents and handled them at the key JPL meetings. 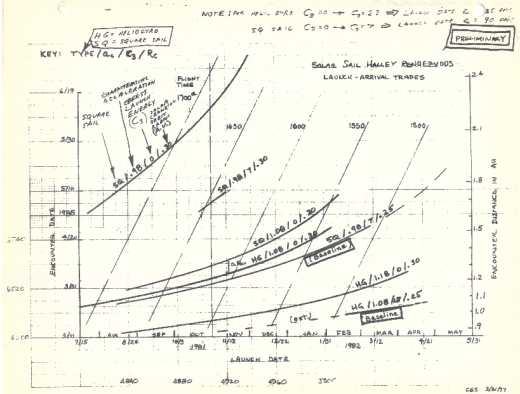 Friedman includes in one of the newsletters a March 14, 1977 article in Science covering the JPL sail work. It reminds us how exotic sail ideas were at the time. Quoting from it:

[The sail] might also effectively open up the rest of the Solar System to manned spaceflights that cannot be considered now because of tremendous costs. JPL’s Louis Friedman thinks that a flotilla of sunjammers could embark on a manned Mars mission by the end of the century, and foresees a day when fleets of huge kites shuttle through space — as the East Indiamen plied the oceans three centuries ago — making regular stops at Mercury, Venus, Mars or the asteroids.

Next post: The Incentive Trap: When to Launch a Starship