The boundary between brown dwarf and planet is poorly defined, although objects over about 13 Jupiter masses (and up to 75 Jupiter masses) are generally considered brown dwarfs. Brown dwarfs do not reside, like most stars, on the main sequence, being not massive enough to sustain nuclear fusion of hydrogen in their cores, although deuterium and lithium fusion is a possibility. But new work on a brown dwarf called SIMP J013656.5+093347 (mercifully shortened to SIMP0136) is giving us fresh insights into the planet/dwarf frontier. 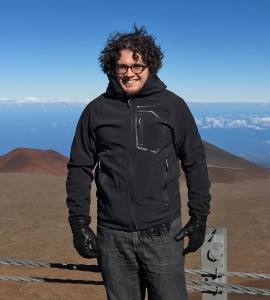 The intriguing object is found in the constellation Pisces, the subject of previous studies that focused on its variability, which has been interpreted as a signature of weather patterns moving into and out of view during its rotation period of 2.4 hours. Now Jonathan Gagné (Carnegie Institution for Science) and an international team of researchers have put new constraints on SIMP0136, finding it to be an object of planetary mass.

Faint brown dwarfs and cold planetary-mass objects repay close study because as we move just below the deuterium burning mass boundary we are looking at objects much like the gas giants we can observe in exoplanetary systems. But the observations are tricky: Although these borderline objects have physical properties like temperatures, clouds, surface gravities and masses similar to gas giant planets, they also cool down with time, so that their masses cannot be deduced from their effective temperatures alone.

We also need to know about the age of the object we’re looking at, and it is here that the new work helps. Using data from the Near Infrared Spectrometer (NIRSPEC) on the Keck II instrument at Mauna Kea, Gagné and team have identified SIMP0136 as a likely member of the 200 million year old Carina-Near moving group. Moving groups are groups of similarly aged stars moving together through space, offering the possibility of dating any objects that can be associated with them. This faint brown dwarf clearly fits the bill.

Knowing not just the temperature of an object but its age as well, we can calculate its mass. SIMP0136 turns out to be just below the borderline we normally assign to the smallest brown dwarfs. The object has a mass of 12.7 Jupiter masses, plus or minus 1 Jupiter mass.

Assuming that this object is indeed a free-floating planet as opposed to a brown dwarf, it becomes part of a useful category in this mass range. Studying an exoplanetary atmosphere within a distant star system is complicated by the light of the central star, although with closely orbiting gas giants, the possibility of studying starlight filtered through their atmospheres during transits is available. But atmospheric studies of free-floating worlds are easier to conduct in detail, once we have made the key distinction between planetary status and star. 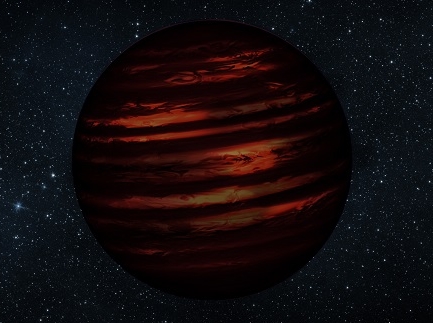 Image: An artist’s conception of SIMP J013656.5+093347, or SIMP0136 for short, which the research team determined is a planetary-like member of a 200-million-year-old group of stars called Carina-Near. Credit: NASA/JPL, slightly modified by Jonathan Gagné.

We’re also dealing with an object that is relatively close to the Sun. At a distance of just under 20 light years, it is the nearest known member of any young stellar moving group and among the 100 nearest systems to the Sun. SIMP0136 turns out to be, the authors add, “…an even more powerful benchmark than previously appreciated and will help [us] to understand weather patterns in gaseous giant atmospheres.”

Cold planetary-mass objects like this one can be found almost anywhere in the sky, since they are not in orbit around a star. That makes them hard to discover. No wonder we’ve only found about twelve objects on the brown dwarf / planet boundary, and most of these have yet to be confirmed by radial velocity measurements. We should have more soon, because this discovery is one of the early results from the BANYAN All-Sky Survey-Ultracool (BASS-Ultracool), which intends to locate similar young brown dwarfs in moving groups, aiming to explore the properties of planetary-mass objects with cold atmospheres.