The Sounds of Europa

Although there are no plans at present to send a lander to Europa, we continue to work on the prospects, asking what kind of operations would be possible there. NASA is, for example, now funding a miniature seismometer no more than 10 centimeters to the side, working with the University of Arizona on a project called Seismometers for Exploring the Subsurface of Europa (SESE). Is it possible our first task on Europa’s surface will just be to listen?

The prospect is exciting because what we’d like to do is find a way to penetrate the surface ice to reach the deep saltwater ocean beneath or, barring that, any lakes that may occur within the upper regions of the ice shell. The ASU seismometer would give us considerable insights by using the movements of the ice crust to tell us how thick it is, and whether and where ocean water that rises to the surface can be sampled by future landers. 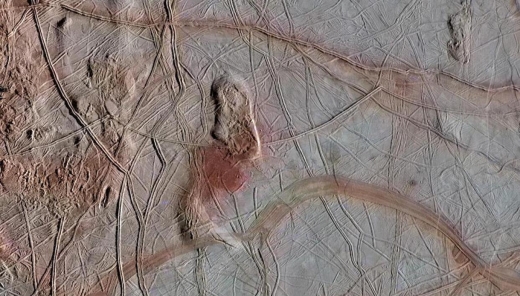 Image: Close-up views of the ice shell taken by the Galileo spacecraft show uncountable numbers of fractures cutting across each other. Reddish colors (enhanced in this view) come from minerals in ocean water leaking through the shell and being bombarded by Jupiter’s radiation. The ASU-designed seismometer would land on the shell and detect its movements. Credit: NASA/JPL-Caltech.

Europa’s story is all about tides. The moon (a bit smaller than our own Moon) is constantly being tugged by the large Galilean moons Io and Ganymede, preventing its orbit from circularizing completely. In turn, that small orbital eccentricity allows Jupiter to stress the ice shell. Alyssa Rhoden is an ASU geophysicist working on the SESE project. She points out in this ASU news release that seismometers can tell us how active the ice shell is.

Acknowledging that we’re dealing with a geologically young surface — probably between 50 to 100 million years old, based on crater counts and resurfacing — Rhoden adds: “It may have undergone an epoch of activity early in that period and then shut down.” Equally plausible is the idea that even today the shell is undergoing uplifts and fracturing from below, with the opportunity for ocean water to reach the surface. Recent observations of plumes on Europa, based on Hubble data from 2012 and 2016, support the idea.

Seismometers would help us detect ongoing activity in the shell. ASU envisions a seismometer mounted on each leg of a lander — four to six seismometers in all, depending on lander design. These would be driven deep into the ground, avoiding the kind of loose surface materials that would isolate the instruments from seismic waves passing through the shell. And that calls for the kind of rugged instrument ASU is building. Able to operate at any angle, the prototype can survive landings hard enough to ensure deep penetration for each seismometer.

Edward Garnero is an ASU seismologist who points out that the instrument package will need to sample a wide range of potential vibrations, combining observations from each seismometer to pinpoint the source of seismic activity:

“We can also sort out high frequency signals from longer wavelength ones. For example, small meteorites hitting the surface not too far away would produce high frequency waves, and tides of gravitational tugs from Jupiter and Europa’s neighbor moons would make long, slow waves.”

The sound of Europa? Garnero adds:

“I think we’ll hear things that we won’t know what they are. Ice being deformed on a local scale would be high in frequency — we’d hear sharp pops and cracks. From ice shell movements on a more planetary scale, I would expect creaks and groans.” 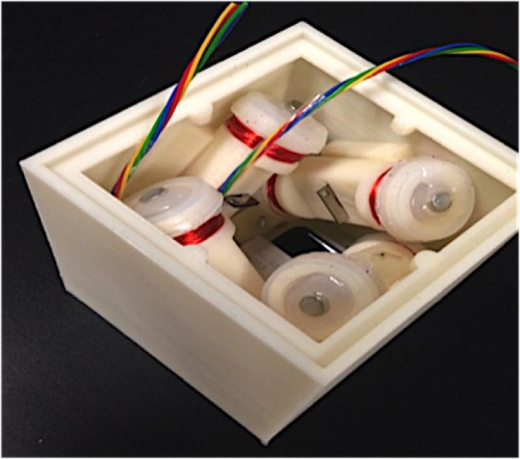 Image: Four sensors arranged in a box measuring about 10 centimeters on a side make up the test module for the SESE project seismometer. The various sensor orientations allow the instrument to work no matter how it lands on the surface. Credit: Hongyu Yu/ASU.

The Seismometers for Exploring the Subsurface of Europa project avoids the mass-and-spring sensor concept used in conventional instruments because that design is delicate enough that it needs to be put in place without any serious jolts and must be installed in an upright position. The SESE seismometer avoids those problems and uses a micro-electromechanical system with a liquid electrolyte as its sensor, offering high sensitivity to a wide range of vibrations.

Finding pockets of water within the upper ice would offer further areas of astrobiological interest and add to the likelihood of nutrients being transported from the ocean to the surface. Thus the findings of a seismometer like this could be crucial for future lander missions. Galileo imagery has shown us long linear cracks and ridges broken by areas of disrupted terrain where surface ice has refrozen. If Europa remains active today, we can use what SESE hears on the surface to predict the best areas for future lander operations.

“We want to hear what Europa has to tell us,” adds Hongyu Yu (ASU School of Earth and Space Exploration), who heads up the project. “And that means putting a sensitive ‘ear’ on Europa’s surface.”