Let me call your attention to the PLANETS telescope, now seeking a funding boost through an ongoing Kickstarter campaign. Currently about halfway built, the PLANETS (Polarized Light from Atmospheres of Nearby ExtraTerrestrial Systems) instrument is located on the 10,000 foot Haleakala volcano on the island of Maui. When completed, it will be the world’s largest off-axis telescope (at 1.85 meters) for night-time planetary and exoplanetary science. And it’s part of a much larger, scalable effort to find life around nearby stars in as little as a decade.

An off-axis design removes obstructions to the light path like the secondary mirror supports that can cause diffraction effects and lower image quality in axially symmetric reflective telescopes. Here light from the primary mirror is deflected slightly out of the incoming lightpath, limiting diffraction and scattered light. The PLANETS Foundation, the international collaboration of scientists and engineers behind the new telescope, sees it as a test of “low scattered light off-axis optics” as well as cutting edge “thin mirror technology.” The lightweight PLANETS mirror is 90 percent polished — using a tool called HyDRa (developed at the National Autonomous University of Mexico) that has demonstrated 1/100th of a wavelength polish — and key mechanical components of the off-axis design are waiting to be built.

The PLANETS instrument will be optimized for studying the exo-atmospheres of the rocky planets in our own Solar System, but will also delve into the atmospheres and surfaces of bright nearby exoplanets and examine circumstellar disks in young stellar systems. It also sets the stage for biosignature detection as we begin to upgrade its scalable technologies.

As a pathfinder, the PLANETS instrument is the beginning of a 10-year roadmap that aims to make telescopes that are lighter and less costly than the large instruments we currently use to probe the universe. The goals here are impressive: To create a census for life on several hundred of the nearest habitable zone exoplanets. The next step would be an instrument called ExoLife Finder, a circular array of sixteen 5-meter mirrors, using the ‘printed mirror’ technology and lessons learned from the PLANETS telescope to create a hybrid interferometer. With a total diameter of some 40 meters, ELF would be the first telescope to create surface maps of nearby exoplanets, including the one on our doorstep, Proxima b.

But beyond ELF we have Colossus, consisting of 58 independent off-axis telescopes that combine their data using interferometric methods to produce a 74-meter diameter effective resolution. Colossus and its capabilities will be the subject of tomorrow’s post, but for today I’ll note that the $600 million instrument could itself be built in a scant 96 months, according to the PLANETS Foundation site, once funding has been secured. An array based on scalable Colossus concepts could even become an optical system for beamed sailcraft of the kind envisaged by Breakthrough Starshot. But before we do all this, we have to build PLANETS.

The PLANETS telescope is backed by a number of academic sources including Japan’s Tohoku University, Germany’s Kiepenheuer Institute and the Institute for Astronomy in Hawaii, along with technology organizations like HNu Photonics and Dynamic Structures. Completion is expected in 2019, with a total cost of $4 million and approximately $500,000 left to raise. Thus the Kickstarter campaign is a cog in a larger effort. The initial Kickstarter goal of $20,000 goes toward finishing the polishing of the secondary mirror for the instrument, with a stretch goal of $45,000 that would be applied to building the primary telescope support system.

This instrument will demonstrate the ultra thin mirror concepts and hybrid interferometry needed to create an ELF within five years, and a Colossus within a decade. If you can help, please join this effort, and note the ExoCube, a 3D laser engraved glass map of potentially habitable worlds, that is available to supporters in a variety of styles featuring a range of mineral sphere ‘planetary’ add-ons. The Kickstarter site’s videos give you the overview. 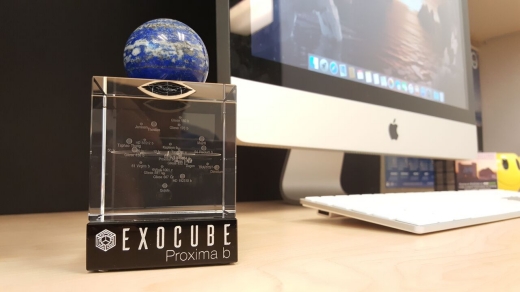 Tomorrow we’ll delve deeper into Colossus and talk about the markers it could identify not only in terms of biosignatures but signs of possible technological civilizations.

Next post: Colossus and SETI: Searching for Heat Signatures