Although many of the nearby stars we will study for signs of life are older than the Sun, we do not know how long it takes life to emerge or, for that matter, how likely it is to emerge at all. As we saw yesterday, that means plugging values into Drake-like equations to estimate the possibility of detecting an alien civilization. We can’t rule out the possibility that we are surrounded by planets teeming with non-sentient life, fecund worlds that have no heat-producing technologies to observe. Fortunately, we are developing the tools for detecting life of the simplest kinds, so that while a telescope of Colossus class can be used to detect technology-based heat signatures, it can also be put to work looking for simpler biomarkers.

Svetlana Berdyugina (Kiepenheuer Institut für Sonnenphysik and the University of Freiburg), now a visiting scientist at the University of Hawaii, has been leading a team on such detections and spoke about surface imaging of Earth-like planets at the recent Breakthrough Discuss conference. The emphasis was on Proxima b, but these techniques can be applied to many other systems within the 60 light year radius that Colossus should be capable of probing.

Studying exoplanets in different orbital phases allows us to acquire a surprising amount of information, using techniques that have already been deployed for the study of the surfaces of stars. We have to take into account factors like clouds, seasonal variation in albedo, and the variability of the host star as we consider these matters, but given the signal-to-noise ratios that the specs for a Colossus-like telescope imply, we should be able to discern not only variations between land masses and oceans but the photosynthetic biosignature of local plant coverage.

Berdyugina’s team includes Jeff Kuhn (University of Hawaii), and university colleagues David Harrington and John Messersmith, along with Tina Šantl-Temkiv (Aarhus University, Denmark). The idea they have explored in a 2016 paper in the International Journal of Astrobiology (citation below) is to use the properties of light to detect photosynthesis.

What can we say about the detectability of biomolecules that capture photons and store their energy in chemical bonds? In green plants, the resulting chemical energy converts water, carbon dioxide, and minerals into oxygen and energy-rich organic compounds. Photosynthetic pigments can absorb solar light in the visible range and create the chemical bonds with which it can be stored for use. Chlorophyll pigments, for example, absorb blue to red light while reflecting some part of the green at visible wavelengths, which accounts for our perception of green plants. The useful fact is that all incident infrared light is reflected, giving us a marker if we can find a way to observe it. This sharp rise in reflectivity has been called ‘the red edge.’

We use these facts already in studying our own planet through Earth-observing satellites like Landsat, which can map changes to Amazon forest cover by imaging in multiple bands falling on either side of the ‘red edge.’ I also note work from Giovanna Tinetti (University College London), which estimates that 20 percent of a planet’s surface must be covered by plants and free from clouds in order for the imprint of vegetation to show up in a global spectrum. It will be interesting to see whether, as it continues to develop, Berdyugina’s work agrees with this figure.

But back to the paper. The key to the work is polarization, the oscillation of light in certain directions as opposed to light that oscillates in all directions at once. We learn that the infrared light reflected by a leaf is polarized nowhere near as markedly as the visible light reflected off it. This means that polarizing filters can be used with sufficient contrast to detect biopigments, each of which, like chlorophyll, has its own signature in polarized light. Moreover, the current work shows that polarized light can distinguish clearly between the biosignatures of photosynthesis and light from oceans, minerals and atmospheres. 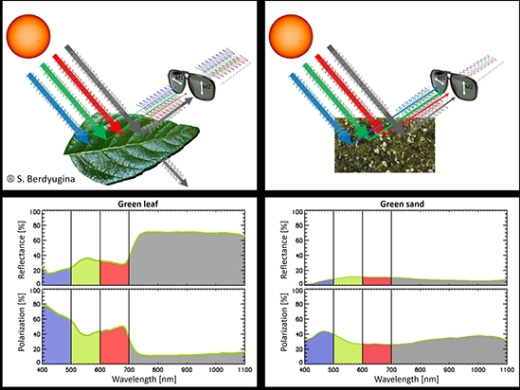 Image: A green leaf absorbs almost all red, green and blue light (RGB), but it reflects and transmits infrared light (shown in grey). The reflected infrared light is only weakly polarized due to the reflection of a healthy leaf, but the reflected RGB light is strongly polarized due to biopigments. Measuring the amount of polarized light at different colors reveals the signature of the leaf biopigments. Green sand reflects and polarizes sunlight almost equally in all wavelengths, which distinguishes it from a leaf that is a similar color. Similarly, yellow plants are different from yellow sand, etc. Credit: S. Berdyugina.

In their 2016 paper, the researchers discuss their development of a detection mechanism based on polarimetry, working with a laboratory experiment measuring the optical polarized spectra of samples both biological and non-biological. The paper investigates a range of biomolecules that capture stellar photons and store their energy in chemical bonds, examining plants with various pigments and likewise measuring non-biological materials like rock and sand.

The results, drawn on modeling of the polarized spectra of Earth-like planets in a variety of configurations — degree of surface coverage by photosynthetic organisms, empty land areas and ocean — show how useful polarized spectra can be at detecting photosynthetic pigments. Bear in mind when considering future observations that even with upcoming giant telescopes, we will not be able to image a planetary surface directly. Instead, we will use changes in the rotational signature of the planet as it moves about its star to learn about surface properties.

This rotational signature should prove extremely helpful, as the paper notes, although it requires large telescopes. Moreover, the contrast achievable in detected light depends on the kind of star we are dealing with and the wavelengths we are working at. From the paper:

It is feasible that the contrast down to 10–8 can be achieved with the current technology. However, to collect the necessary amount of photons in order to achieve such a high contrast for small planets requires extremely large telescopes. It appears that 25–40 m telescopes will be able to see only a few such planets. Large telescopes, such as the 75 m Colossus telescope are needed to investigate hundreds of Earth-like planets in stellar habitable zones (Kuhn & Berdyugina, 2015), but even such large telescopes will be able to detect their light with a sufficient SNR at very low spectral resolution or in broad bands. The fact that absorption and polarization features of biopigments are extremely broad allows for filters designed to provide enough detail on their possible photosynthetic origin.

Such filters give us, in other words, a tool that can distinguish a living from a non-living world. And not just in terms of vegetation. The paper goes on to note that the same biosignature is produced by bacteria and archaea, both of which use biopigments to harvest stellar light, as well as to protect themselves from dangerous UV radiation. Applying the techniques in this paper to the study of microorganism signatures through polarized light is an ongoing project.

This work may remind you of Nancy Kiang’s work on the spectral signatures of photosynthesis at NASA Goddard. Finding the right absorption band in the spectrum of an exoplanet can be tricky, as Kiang has shown by studying the colors of pigments and how they might change depending on the spectral class of the host star (see Beyond the Red Edge). On Earth, the colors of our land plants depend upon pigments that absorb in the visible blue and red, giving us green and yellow plants, but M-class dwarfs may have their peak absorption in the blue and near-infrared part of the spectrum, as Berdyugina and colleagues note. Thus we have to bear in mind how photosynthetic pigments might adapt depending on incident starlight. From Berdyugina et al:

It is worth also to note that a lack of blue photons in cool M stars will probably require a more complex mechanism for splitting water molecules into hydrogen and oxygen involving three or four photons instead of two as it occurs in terrestrial organisms. Therefore, understanding properties of radiation reflected from various photosynthetic organisms may help to identify such life forms on distant planets. This is the primary goal of our study.

Thus the paper identifies the signatures of biological pigments that can be used for biomarker detection, developing models of Earth-like planets with different coverage conditions of land and ocean, vegetation and clouds. The investigation of polarization winds up showing that linear polarization becomes the most potent method for detection of such biomarkers, citing “…very sensitive and rather unambiguous detection of photosynthetic pigments of various kinds.”