TRAPPIST-1h: Filling in the Picture

One of the worst things we can do is to get so wedded to a concept that we fail to see conflicting information. That’s true whether the people involved are scientists, or stock brokers, or writers. It’s all too easy to distort the surrounding facts because we want to get a particular result, a process that is often subtle enough that we don’t notice it. Thus I was interested in what Rodrigo Luger said about his recent work on the outermost planet of TRAPPIST-1:

“It had me worried for a while that we were seeing what we wanted to see. Things are almost never exactly as you expect in this field — there are usually surprises around every corner, but theory and observation matched perfectly in this case.”

And that’s just it — in exoplanet research, we’ve come to expect the unexpected. So when Luger (a doctoral student at the University of Washington) went to work on this intriguing star some 40 light years from Earth, and its seven now famous planets, he was understandably edgy. Would TRAPPIST-1h turn out to orbit just where his team had projected? 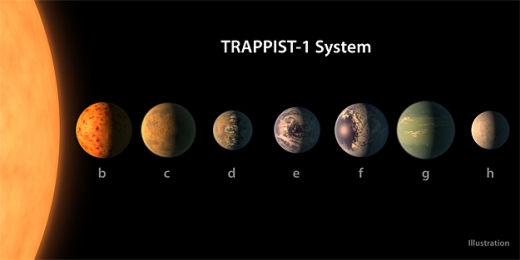 Image: A size comparison of the planets of the TRAPPIST-1 system, lined up in order of increasing distance from their host star. The planetary surfaces are portrayed with an artist’s impression of their potential surface features, including water, ice, and atmospheres. Credit: NASA/R. Hurt/T. Pyle.

You’ll recall that it was the original survey led by Michaël Gillon (University of Liège, Belgium) that identified three planets around TRAPPIST-1 in 2016, a number that jumped to seven in a 2017 paper that drew worldwide attention, especially because several of the planets appeared to be within the star’s habitable zone. TRAPPIST-1h was a problem because Gillon and team were only able to observe a single transit. What Luger proceeded to do, working with Gillon as one of his co-authors, was to follow up on that work with an international effort that studied 79 days of K2 data, snaring four transits of TRAPPIST-1h in the process.

The bit about seeing what you want to see comes from the fact that the planets of TRAPPIST-1 are locked into an orbital resonance, making their orbital periods mathematically related. Luger and colleagues wanted to use the orbital velocities of the better understood TRAPPIST-1 planets to make a prediction about the orbital velocity and period of TRAPPIST-1h. Six possible resonant periods for the planet came out of these calculations, but subsequent data ruled out all but one. Would resonance unlock the problem?

The answer was yes. The K2 data confirmed the prediction, showing us that TRAPPIST-1h is in a frigid 18.77 day orbit around the ultracool dwarf star. At this distance from the host, the planet receives about as much energy per unit area from its star as Ceres receives from the Sun.

Image: The animation shows a simulation of the planets of TRAPPIST-1 orbiting for 90 Earth-days. After 15 Earth-days, the animation focuses only on the outer three planets: TRAPPIST-1f, TRAPPIST-1g, TRAPPIST-1h. The motion freezes each time two adjacent planets pass each other; an arrow appears pointing to the location of the third planet. This complex but predictable pattern, called an orbital resonance, occurs when planets exert a regular, periodic gravitational tug on each other as they orbit their star. The three-body resonance of the outer three planets causes the planets to repeat the same relative positions, and expecting such a resonance was used to predict the orbital period of TRAPPIST-1h. Credit: Daniel Fabrycky/University of Chicago.

So now we have a seven-planet chain of resonances. We’ve seen other multi-planet resonances — four-planet resonances exist at Kepler-80 and Kepler-223 — but TRAPPIST-1, as in so many things, ups the ante considerably. The resonance picture here also gives us ideas about the history of this system, which is thought to be somewhere between 3 billion and 8 billion years old (and if that range of possibilities isn’t a reminder of how much we have to learn about dating cool stars like this, I don’t know what is).

The resonant structure of the system suggests that orbital migration may have played a role in its formation. Embedded in gaseous planet-forming disks, planets growing above ∼ 1 MMars create density perturbations that torque the planets’ orbits and trigger radial migration. One model for the origin of low-mass planets found very close to their stars proposes that Mars- to Earth-sized planetary embryos form far from their stars and migrate inward. The inner edge of the disk provides a migration barrier such that planets pile up into chains of mean motion resonances.

Thus we’re looking at possible migration inward of a set of planets that migrated in what Luger calls ‘lock-step.’ Suddenly TRAPPIST-1 becomes an excellent test case not only for planet formation but planet migration theories. The paper continues:

This model matches the observed period ratio distribution of adjacent super-Earths if the vast majority (∼ 90%) of resonant chains become unstable and undergo a phase of giant impacts. Some resonant chains do survive, and a handful of multiple-resonant super-Earth systems have indeed been characterized. The TRAPPIST-1 system may thus represent a pristine surviving chain of mean motion resonances.

This would have been, the authors believe, a slow migration given the low mass of the TRAPPIST-1 planet-forming disk, and the fact that the planets themselves are low in mass. Perhaps this explains why the TRAPPIST-1 resonant chain is less compact than in systems with more massive planets, and why its unique stability has survived.

And what more can I say about K2? Despite everything going against the TRAPPIST-1h work, including not just the drift and jitter of the spacecraft in its less than optimum state but the faintness of the occasionally flaring target, K2 nonetheless delivered the goods. It’s a real testimony to those working the mission that we’re still pulling useful data out of the K2 observations, and testimony as well to the quality of the team working TRAPPIST-1h.