How to make sense of Enceladus? The moon’s famous jets of water vapor, mixing with organic compounds, salts and silica, first revealed the possibility of an ocean beneath the icy surface, and the Cassini orbiter has treated Enceladus as a high priority target ever since. But why the asymmetry here? After all, while the south polar region includes the active ‘tiger stripe’ fractures associated with the plumes in a geologically young area, the northern pole shows much more cratering, evidence for a considerably older surface and, obviously, no plumes at all.

Perhaps, say astronomers from NASA, the University of Texas and Cornell, we’re dealing with an ancient impact, one that completely re-oriented Enceladus by tipping it about 55 degrees away from its original axis. Thus we get fractures well over 100 kilometers long in the south, evidence for an asteroid strike in what would have once been an area close to the moon’s equator. Radwan Tajeddine (Cornell University) is a Cassini imaging team associate and lead author of the paper on this work, which recently appeared online in Icarus:

“The geological activity in this terrain is unlikely to have been initiated by internal processes,” says Tajeddine. “We think that, in order to drive such a large reorientation of the moon, it’s possible that an impact was behind the formation of this anomalous terrain.”

Giving weight to the hypothesis is the presence of a series of basins that can be detected across Enceladus’ surface. The researchers believe these are traces of a previous equator and poles. The features visible to Cassini would also reflect underlying variations in the ice shell. Such an impact would have caused Enceladus to wobble, finally re-establishing stability over the course of at least a million years. The alteration to the north-south axis resulting from this is known as ‘true polar wander,’ changing the locations of north and south poles. 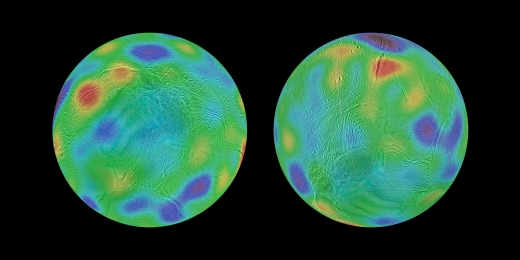 Image: These maps look toward the icy moon’s southern hemisphere, with colors representing highs and lows. Purple represents the lowest elevations, while red represents the highest. The map at left shows the surface of Enceladus in its possible ancient orientation, millions of years ago. The chain of basins representing topographic lows can be seen in blue and purple, running along the equator, with an additional low region around the original south pole. The region that encloses the moon’s currently active south polar terrain, with its long, linear “tiger stripe” fractures, would have been at middle latitudes just south of the equator. The map at right shows the current orientation of Enceladus. Credit: NASA/JPL-Caltech/Space Science Institute/Cornell University.

Thus if we simply re-orient Enceladus by about 55 degrees of latitude, the pair of depressions found by the researchers lines up with a much older equator and poles. And we have an explanation for the existence of the ‘tiger stripe’ fractures and their jets. An Enceladus without jets would have been visually less dramatic, but the impact theory also reminds us that other moons without telltale geysering activity may conceal internal oceans of their own.