SSEARS: Background of a NIAC Study

I always keep an eye on what’s going on at the NASA Innovative Advanced Concepts office, which is where I ran into Jeff Nosanov’s Phase I study for a solar sail called Solar System Escape Architecture for Revolutionary Science. At the Jet Propulsion Laboratory, Jeff managed flight mission proposals and supported the radio isotope power program. He now lives in Washington DC, a technology entrepreneur whose fascination with spacecraft design has never diminished. In the essay below, Jeff explains the background of his first NIAC award (a second, PERIapsis Subsurface Cave Optical Explorer, would lead to Phase I and Phase II grants), and gives us an idea of the ins and outs of making ideas into reality at NIAC and JPL. For more, the website nosanov.com is about to go online, and Jeff’s new podcast debuts today. 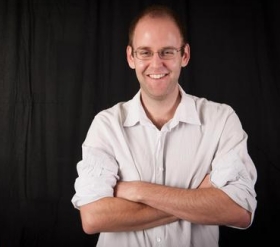 It’s an honor and a privilege to be asked to write about my near-interstellar mission work for the Tau Zero Foundation. Marc’s book and Paul’s writing were very inspiring to me as I began working at JPL and dove into the interstellar mission community. This article will describe my journey to JPL, the process of proposing the mission concept, and the experience of managing the project. The mission concept itself can be read about here.

In summary, SSEARS (Solar System Escape Architecture for Revolutionary Science) is a solar sail-based mission to return to the heliopause (the edge of the solar system) to continue the Voyager science. The driving goal was to determine the fastest possible propulsion method to return to the outer solar system. We concluded that it was possible to get there in about 18 years (half the time it took Voyager) using a very large solar sail system. How did we get to this point? I’ll start at the beginning.

One of my favorite childhood photos was taken at the Griffith Observatory in Los Angeles. I don’t quite remember this event, but I do strongly remember a later one, my visit at age 5 in 1987 around the time of the Voyager 2 Neptune encounter. My dad took me there to look through the big telescope at Neptune, and told me of the spacecraft that was nearing the ice giant planet. 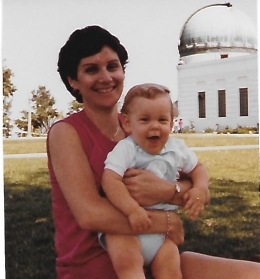 I distinctly remember the “mind blown” moment of realization that such things were possible. I also learned that day about JPL, the NASA lab just a few dozen miles from the Griffith Observatory where the Voyagers, and so many other spacecraft, were built. I didn’t know it until much later but that event turned me into a space guy. I also recall a conversation with my dad from around that time in which he told me that we can visit other planets, but not other stars. That stuck with me.

Image: Photo of Jeff as a baby being held by his mother at Griffith Observatory.

As a child it is easy to have a fairly distorted view of what NASA actually is, and what it does. It’s tempting to imagine something out of Star Trek, with wild and amazing technologies in development all around. In reality, only a small part of NASA, the NASA Innovative Advanced Concepts Program (NIAC), embodies that exciting vision, as I discovered as an adult.

About 22 years later I started working at JPL on January 4th, 2010. Suddenly the greatest deep space exploration playground was opened to me. I was extremely eager, giddy even, to learn about this work and discover how I could contribute. I began to learn everything I could about everything I could access. I spent many hours reading books in the library (especially Frontiers of Propulsion Science) and talking to as many people, especially senior people, as possible. I especially stalked the Voyager program people.

My general knowledge about how NASA missions are developed, selected, funded, built, and operated grew. I began to pay attention to RFPs (Requests for Proposals) and BAAs (Broad Agency Announcements) that came through the daily emails. I eventually pieced together the realization that anyone could propose concepts (at nearly any stage of development) to various programs within NASA. But how to possibly find the right combination of ambition, team, capability, vision, most importantly a receptive NASA program?

I spent many hours with program managers, scientists and engineers learning about the current challenges and capabilities in deep space exploration. I was extremely grateful at the time, but in retrospect I have even greater appreciation for the time spent with me. It was only through the kind support of managers, engineers, scientists and many others that I developed the general background knowledge to attempt the work that became my project.

Eventually I came to learn about the NIAC program. That program exists to fund revolutionary concepts that significantly increase exploration capability. This is distinct from the majority of NASA projects, which largely seek to minimize technological risk. The NIAC program exists as a way to ensure that investments in promising, ambitious technology get made, and to reduce technological stagnation as the risk-minimizing forcing functions of most other NASA programs run their course.

I knew I wanted to make a dent in interstellar flight, so I spent a lot of time with people from the Voyager program. I tried to learn everything I could about the mission to develop a mission concept that would be worth doing scientifically. Around this time NASA had been planning to fund a technology demonstration mission for a concept called SunJammer. This was to be a solar sail mission to a Lagrange point, using the sail for propulsion and station-keeping. I decided that a NIAC-worthy proposal would be to start with just how large we could reasonably build a solar sail, and then see how fast such a system could reach the heliopause with a scientifically valuable payload.

I approached Ed Stone at Caltech with child-like reverence. Stone was project scientist for Voyager and a former director of JPL itself. I wanted to ask him what he would do to follow Voyager if he had a limitless budget. To my surprise he accepted my meeting request, and we had several meetings in which he outlined a scientific payload designed entirely for the heliopause region. This became the “mission” that the hypothetical giant solar sail propulsion system would uniquely enable.

JPL has several systems in place to help people write successful proposals. Each proposal opportunity announcement from NASA results in a mentoring and guidance resource from the responsible JPL program office. I took great advantage of this resource for the first few proposals of my career and it has made a world of difference.

The theme across many proposals for many agencies in my experience is the importance of genuine, exciting storytelling. Thinking back, that was all I had for my first effort! The process of writing the proposal exposed me to a great many inner workings of JPL including program management, costing, and even obtaining submission authority. I doggedly, perhaps obsessively, followed the process to ensure that all the rules were followed and I felt a deep sense of relief and excitement once the proposal was fully submitted. However, I did not have any way of estimating my chances for success due to my lack of experience. I moved on with my regular work and hoped.

Months later I got a most unexpected phone call telling me that my proposal had been selected! I was over the moon, and I felt something very powerful for the first time: My ideas are good and are worth pursuing. I felt a change in responsibility. The proposal development process was partly for my own personal satisfaction and growth. It was a wonderful experience. Now, having been selected, I had the privilege of having the responsibility of discovering something new about the universe and our place in it.

One of the important lessons I learned is to keep the long term goal in mind. In our case, this specifically meant figuring out the fastest possible way back to the heliopause with a science payload worth taking there. It turned out that we could get there in 18 years with a 250m x 250m solar sail and a “Voyager on steroids” payload.

This rendering shows our vision for the spacecraft, and a small part of the solar sail behind it. 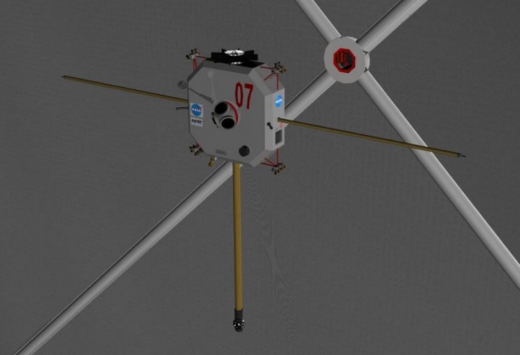 Towards the end of the study I made another appointment with Ed Stone. I told him what we had learned. He looked me in the eye and said “Wow.” I’d like to imagine that in that one moment he was the 5 year old looking at the sky, his mind bursting with possibilities, instead of me.

We ultimately submitted a proposal for Phase 2. Unfortunately intervening events ended the possibility in the foreseeable future for significant progress on our work. We had relied upon the NASA excitement in the SunJammer program to chart the course for solar sail work. That program was cancelled and so we did not have a path forward to advance the technology, and without that potential synergy it seemed that a NIAC phase 2 award was unlikely.

Still, I was satisfied and inspired by our results. I must conclude that the relative impact, in the grand scheme of things, of our study was small, perhaps incremental. However the experience drastically changed my goals and ambition. Ultimately my study is one of many that attempted to explore the limits of what human ingenuity and curiosity can achieve.

I became a father on May 4, 2012 in the middle of the study period. This event fundamentally changed the way I think about space exploration and my own role in it. I enjoyed bringing my son to the Griffith Observatory for many reasons. During the Griffith Observatory visit in which this photo of my son was taken I recalled my dad’s statement that we can travel to other planets but not other stars. As of June 2nd, 2017 now that is still true… 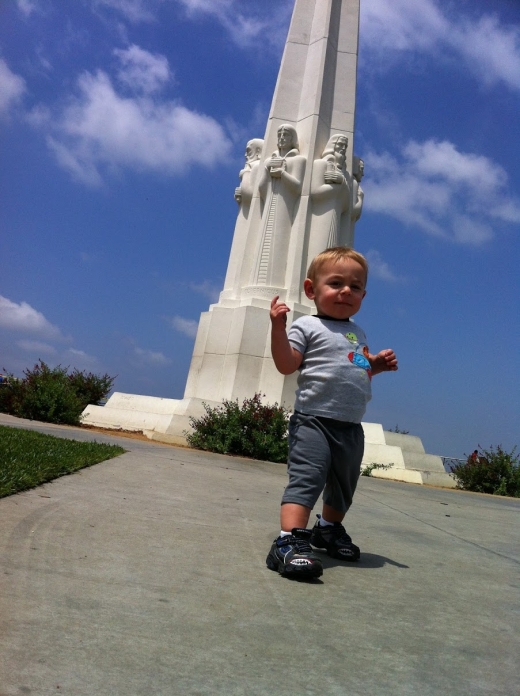