Into the Solar Wind

No spacecraft has ever flown as close to the Sun as the Parker Solar Probe will. The spacecraft will penetrate the outer solar atmosphere — the corona — where its measurements should help us understand the origin and characteristics of the solar wind. To put this in perspective, consider that Mercury is at 0.39 AU. The Helios-B spacecraft, launched in 1976, closed to within 43 million kilometers of the Sun (0.29 AU), the current record for a close pass. The Parker Solar Probe will fly seven times closer, moving within ten solar radii.

We need to learn a lot more about this region as we consider various mission concepts for the future. The Parker Solar Probe uses an 11.43 cm carbon-composite shield designed to keep its instrument package at room temperature, or close to it, despite outside temperatures well over 1350° Celsius. The sundiver concept we talked about yesterday — sometimes called a ‘fry-by’ — has the advantage of maximizing the effect of solar photons by unfurling a sail in close proximity to the Sun. To fly such a mission, we need to understand this environment. 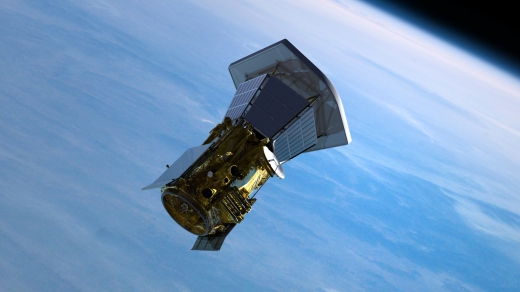 Image: The Parker Solar Probe spacecraft leaving Earth, after separating from its launch vehicle and booster rocket, bound for the inner solar system and an unprecedented study of the Sun. Credit: JHU/APL.

And let’s compare the Parker Solar Probe with the two Helios spacecraft in one other regard. Helios-B set the current speed record for spacecraft at 70.22 kilometers per second. The Parker Solar Probe should reach 194 km/sec. The goal of a future sundiver mission would be to turn solar photon pressure into maximum departure velocity out to deep space. Just how fast an outward-bound sail could fly will depend upon how close it can approach the Sun and what kind of materials it is made of, issues about which we have much to learn.

Conditions this close to the Sun are obviously going to be treacherous, and highly variable. The solar wind of electrons, protons and ionized helium nuclei flowing from the Sun can reach velocities as high as 800 kilometers per second. Unfortunately, the plasma flow is also highly variable, fluctuating over periods short and long. While we speak of ‘solar sailing’ by way of photon pressure on a sail, a truer analog to sailing is the use of a magnetic sail riding the solar wind. In the latter case, we have a highly variable ‘wind’ like mariners face on Earth, with all the attendant issues raised by its fluctuations. The study of both types of sailing should be enhanced by the data we retrieve from the Parker Solar Probe.

In Solar Sails: A Novel Approach to Interplanetary Travel (Springer, 2014), authors Giovanni Vulpetti, Les Johnson and Greg Matloff consider the positive electric charge that can emerge on a sail as ultraviolet solar photons knock electrons free from sail atoms. The problem here is that interactions with high-energy electrons can degrade sail reflectivity. A possible strategy is to deploy an electrically charged grid in front of the sail or use layers of protective plastic that evaporate rather than becoming ionized by solar ultraviolet light.

But every time we add mass to the sail, we reduce the spacecraft’s velocity outbound, meaning we’re probably going to be better served by designing solar sails that are more resistant to UV. It’s clear that we have a lot of work ahead on the interactions between spacecraft and the near-Sun environment, the subject of the Parker Solar Probe’s investigations. Of course, the upcoming probe is also set to investigate the interactions between the solar wind and the Earth’s magnetic field that produce so-called ‘space weather.’ Learning how to predict this kind of weather can protect space assets much closer to home.

A Mechanism for Solar Eruptions

We also need to consider solar activity, for flying any kind of mission within 10 solar radii is going to be dangerous if we have to contend with solar flares or coronal mass ejections. We can do our best to predict the occurrence of such dangers to the spacecraft, but CMEs appear to be random enough that the unexpected appearance of one could quickly end a mission.

On that score, a new paper in Nature looks at a single mechanism that can explain solar eruptions from small jets to coronal mass ejections, working with 3D computer simulations to reveal the underlying process at work. Peter Wyper (Durham University, UK), lead author of the study, notes that filaments — long, dark structures above the surface of the Sun consisting of dense and colder solar material — are associated with the onset of CMEs. We’re now learning that solar jets have filament-like structures as well before their eruption.

“In CMEs, filaments are large, and when they become unstable, they erupt,” said Wyper. “Recent observations have shown the same thing may be happening in smaller events such as coronal jets. Our theoretical model shows the jet can essentially be described as a mini-CME.” 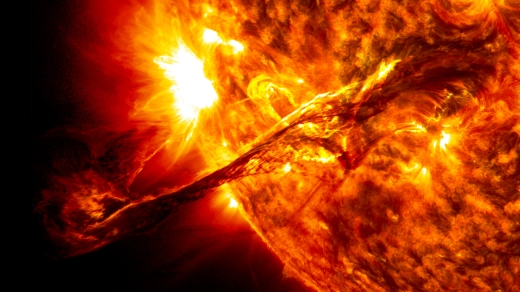 The researchers at Durham University and at NASA have produced a ‘breakout model’ showing how stressed filaments break through magnetic restraints in both solar jets and CMEs. In this model, the process at work is magnetic reconnection, in which magnetic field lines come together and realign into a new configuration. The event is powerful enough that the energy stored in the filament breaks out from the surface and is ejected into space.

The Parker Solar Probe gives us another way to obtain high-resolution observations of the magnetic field and plasma flows in the solar atmosphere. We can expect similar help from the European Space Agency’s Solar Orbiter mission, scheduled for a launch in the fall of 2018. Unlike the Parker Solar Probe, the Solar Orbiter will go into an inclined orbit that allows better imaging of the areas around the Sun’s poles. Both missions obviously deepen our resources for sundiver mission planning as we contemplate fast departures into the outer system.

Tomorrow I’ll take a look at ESA’s Solar Orbiter in the context of our continuing efforts to understand the nearest star. The paper on solar eruptions is Wyper et al., “A universal model for solar eruptions,” Nature 544 (27 April 2017), 452-455 (abstract).