The Golden Apples of the Sun

Alex Tolley mentioned Ray Bradbury’s story “The Golden Apples of the Sun” in connection with my first article on the Parker Solar Probe, and it’s a short tale worth remembering in connection with a mission flying so remarkably close to our star. First published in 1953 in a Doubleday collection of the same name, the tale is a short, mythic take on dangerous questing, with its main character, the unnamed captain, a figure something like Melville’s Captain Ahab. His goal is to fly to the Sun’s surface and retrieve some of its fire:

The captain stared from the huge dark-lensed port, and there indeed was the sun, and to go to that sun and touch it and steal part of it forever away was his quiet and single idea. In this ship were combined the coolly delicate and the coldly practical. Through corridors of ice and milk-frost, ammoniated winter and storming snowflakes blew. Any spark from that vast hearth burning out there beyond the callous hull of this ship, any small fire-breath that might seep through would find winter, slumbering here like all the coldest hours of February. 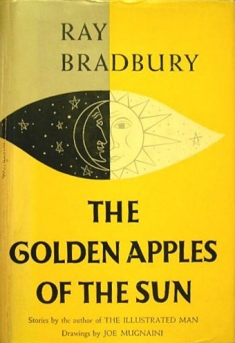 The ship and crew, fighting malfunctioning equipment, fall in their cryogenic ship “like a snowflake into the lap of June, warm July, and the sweltering dog-mad days of August.” It’s Bradbury in full poetic mode, not one of his best tales but one that does capture a bit of the natural human awe at stellar immensity. As for the Parker Solar Probe and the European Space Agency’s Solar Orbiter mission, neither will ‘touch the Sun,’ though the former will close to about 6.2 million kilometers, with the Solar Orbiter at 42 million kilometers.

Image: The dustjacket of the first edition of Bradbury’s collection The Golden Apples of the Sun. The title comes from the lush Yeats lyric The Song of Wandering Aengus. In an interview late in his life, Bradbury recalled: “Maggie [his wife] introduced me to romantic poetry when we were dating, and I loved it. I loved that line in the poem, and it was a metaphor for my story, about taking a cup full of fire from the sun.”

These missions are framed so as to study the near-Sun environment from different perspectives. Both are scheduled for launch in 2018, the Solar Orbiter in October and the Parker Solar Probe in July. What I’m seeing here are two complementary ventures, both examining the interaction between the Sun’s atmospheric gases and its magnetic field. Comparing the datasets should give us our best understanding yet of the inner heliosphere.

The key issues for the Solar Orbiter are listed on this European Space Agency page: 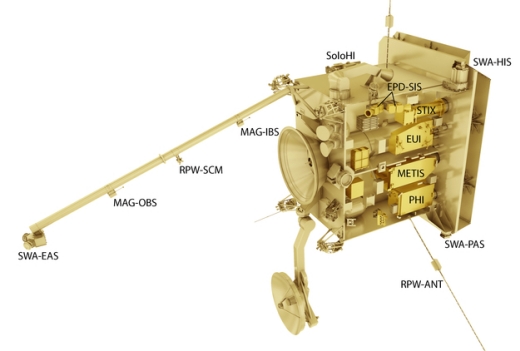 Image: Payload accommodation onboard Solar Orbiter. In this rendering, one side wall has been removed to expose the remote-sensing instruments mounted on the payload panel. The SPICE [Spectral Imaging of the Coronal Environment} instrument (not visible) is mounted to the top panel from below. Credit: ESA.

What Solar Orbiter brings to the mix is an orbit that will allow us to get close-up views of the Sun’s polar regions, with images from latitudes higher than 25 degrees. We should be able to see solar storms building up over an extended period from the same vantage point, because when traveling at the highest velocity along its orbit, Solar Orbiter will come close to matching the speed of the Sun’s rotation on its axis. We will be able to track solar storms for days.

Remember that many of the Sun’s jets originate in the areas around the poles, meaning we need more data about the magnetic field and plasma flows there to delve more fully into the process. These are not regions that are visible to us from Earth.

Understanding the solar wind also helps us consider the feasibility of future propulsion concepts using magnetic sail technologies to ride the solar wind. Meanwhile, the thermal issues a photon-driven sundiver mission will encounter will take center stage as we weigh the performance of the instrument packages on both these spacecraft. A sundiver would pass as close as possible to the Sun before unfurling a solar sail for maximum acceleration. We gain information from the upcoming solar missions that benefits both types of sail technology.

Solar Orbiter will carry a suite of 10 instruments to observe solar activity, 8 of them provided by ESA member states, while the other two are being developed by a European-led consortium and NASA respectively. A three and a half year approach to the operational orbit will include close flybys of Earth and Venus to insert the craft into a highly elliptical orbit. The instruments will measure solar wind plasma, fields, wave and energetic particles close to the Sun, while we can also expect images of solar features at the highest resolution ever seen.

So we’re going to have in situ measurements of the Sun’s extended corona from the Parker Solar Probe along with high-resolution studies of the inner heliosphere and the Sun itself from Solar Orbiter. Which takes me back to Bradbury’s captain, who has now ‘touched’ the Sun and is contemplating what is next:

“Well,” said the captain, sitting, eyes shut, sighing. “Well, where do we go now, eh, where are we going?” He felt his men sitting or standing all about him, the terror dead in them, their breathing quiet. “When you’ve gone a long, long way down to the sun and touched it and lingered and jumped around and streaked away from it, where are you going then? When you go away from the heat and the noonday light and the laziness, where do you go?”

We know where a sundiver sail mission would go: Outward, fast and far…