Just how did the seven planets around TRAPPIST-1 form? This is a system with seven worlds each more or less the size of the Earth orbiting a small red dwarf. If these planets formed in situ, an unusually dense disk would have been required, making planet migration the more likely model. But if the planets migrated from beyond the snowline, how do we explain their predominantly rocky composition? And what mechanisms are at work in this system to produce seven planets all of approximately the same size?

New work out of the University of Amsterdam attempts to resolve the question through a different take on planet formation, one that involves the migration not of planets but planetary building blocks in the form of millimeter to centimeter-sized particles. Chris Ormel (University of Amsterdam) and team note that thermal emission from pebbles like these has been observed around other low-mass stars and even brown dwarfs. The researchers believe these migrating particles become planetary embryos as they reach the snowline, which at TRAPPIST-1 occurs at about 0.1 AU.

Once within the snowline, the embryos would grow by the accretion of rocky pebbles from the inner circumstellar disk, with inward migration eventually stopping at the inner edge of the disk. A key assumption here is that the planets of TRAPPIST-1 formed sequentially rather than simultaneously, a novel concept indeed. So let me go to the paper at this point:

In our model we assume that the H2O iceline is the location where the midplane solids-to-gas ratio exceeds unity, triggering streaming instabilities and spawning the formation of planetesimals. These planetesimals merge into a planetary embryo, whose growth is aided by icy pebble accretion. Once its mass becomes sufficiently large, it migrates interior to the H2O iceline by type I migration, where it continues to accrete (now dry) pebbles until it reaches the pebble isolation mass.

The process then begins again for a second planet:

After some time, a second embryo forms at the snowline, which follows a similar evolutionary path as its predecessor. Even though the inner planet’s growth could be reduced by its younger siblings’ appetite for pebbles, it always remains ahead in terms of mass. Planet migration stalls at the inner disk edge, where the planets are trapped in resonance. 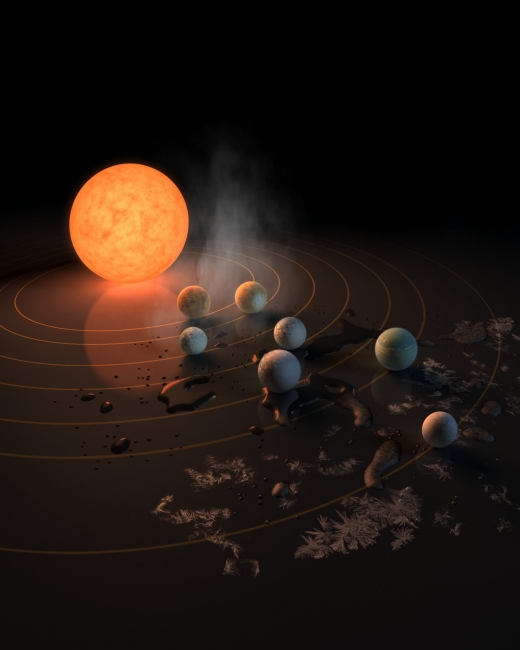 Image: Astronomers from the University of Amsterdam (the Netherlands) present a new model for how seven earth-sized planets could have been formed in the planetary system Trappist-1. The crux is at the line where ice changes to water. Credit and copyright: NASA/R. Hurt/T. Pyle. And please note this JPL news release on the artists who produced this image. All too often, artists like Tim Pyle and Robert Hurt receive scant attention in the stories that run their work. It’s excellent to see their background and methods explained.

The TRAPPIST-1 planets, indeed, form what the authors call ‘a resonant convoy,’ with the outer planets ‘pushing’ on the inner ones. The paper’s numerical simulations produce the observed planetary system with the exception that a 3:2 mean motion resonance emerges among planets b and c, as well as among c and d. Although neither pair is presently at the 3:2 MMR, the authors argue that during the disk dispersion phase of the system’s formation, the 3:2 MMRs of these pairs were broken, leaving us with the overall architecture we see today.

The paper’s most radical contention is that planets have assembled at a specific location, the snowline, as opposed to forming in situ or migrating from their formation regions beyond the snowline. Clearly, many questions remain, including how the streaming instabilities induced at the snowline operate in the presence of planetary embryos. The paper does, however, make a prediction: If a giant planet forms rapidly at the snowline, it should end the flux of pebbles to the inner disk, depriving it of planet-building material. From the paper:

Hence, we expect a dichotomy: when giant planet formation fails, pebbles can drift across the iceline to aid the growth of super-Earths and mini-Neptunes. Conversely, when a giant planet forms at the iceline we expect a dearth of planetary building blocks in the inner disk. Therefore, the close-in super-Earth population found by Kepler and the cold Jupiter populations found chiefly by radial velocity surveys should be anti-correlated – a prediction that could be tested with future exoplanet surveys.

The paper is Ormel et al., “Formation of Trappist-1 and other compact systems,” accepted at Astronomy & Astrophysics (abstract). A preprint is available, but be aware that a number of internal references are not yet filled in, another reason not to assume that preprints necessarily mirror the final paper.