As announced yesterday at NASA Ames, the Kepler team has released the final Kepler catalog from the spacecraft’s first four years of data and its deep stare into Cygnus. The numbers still impress me despite our having watched them grow with each new report: We have 4034 planet candidates, of which 2335 have been verified as exoplanets. More than 30 of the approximately 50 near-Earth sized habitable zone candidates have been verified.

The new release brought us 219 new candidates, 10 of them habitable zone possibilities, giving us a final catalog that is our first take on the prevalence and characteristics of planets in the Milky Way, and paving the way for future space-based instruments as we look for targets for atmospheric characterization and direct imaging. By introducing simulated planet transit signals and adding known false signals, the researchers were able to tighten up the catalog, ensuring against errors in the analysis growing out of the team’s processing methods.

The Kepler data are also the subject of a new take on planetary demographics, as seen in the image below, which takes us into the realm of the kind of planets we do not see in our Solar System, so-called ‘mini-Neptunes’ ranging from 2 to 3.5 times the size of Earth. 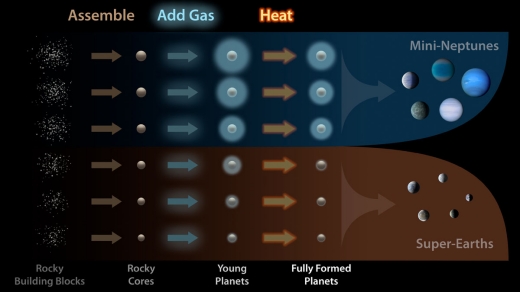 Image: This diagram illustrates how planets are assembled and sorted into two distinct size classes. First, the rocky cores of planets are formed from smaller pieces. Then, the gravity of the planets attracts hydrogen and helium gas. Finally, the planets are “baked” by the starlight and lose some gas. At a certain mass threshold, planets retain the gas and become gaseous mini-Neptunes; below this threshold, the planets lose all their gas, becoming rocky super-Earths. Credit: NASA/Kepler/Caltech (R. Hurt).

A research group working under Andrew Howard (Caltech) has drilled deep into the dataset, measuring the size of 1300 stars in the Kepler field of view to determine the radii of 2025 Kepler planets with four times more precision than had previously been achieved. Out of this work on planetary sizes comes the finding that these planets can be classified into two distinct groups: Rocky Earth-like planets and mini-Neptunes. From the paper:

We find evidence for a bimodal distribution of small planet sizes. Sub-Neptunes and super-Earths appear to be two distinct planet classes. Planets tend to prefer radii of either ∼1.3 R⊕ or ∼2.4 R⊕, with relatively few planets having radii of 1.5–2.0 R⊕. Planets in the gap have the maximum size for a rocky core, as seen in previous studies of bulk planet density and of ultra-short period planets. We posit that the bimodal planet radius distribution stems from differences in the envelope masses of small planets. While our current dataset is insufficient to distinguish between theoretical models that produce the gap, it charts a path forward to unraveling further details of the properties of the galaxy’s most abundant planets.

Although most of the Kepler planets have proven to be between the size of the Earth and Neptune, the planets were previously thought to span the range between the two rather than to fall into distinct groupings. Erik Petigura (Caltech) is a co-author of the new study, which will appear in The Astronomical Journal, along with two other papers that make up an observational program known as the California-Kepler Survey (see citations below):

“In the solar system, there are no planets with sizes between Earth and Neptune. One of the great surprises from Kepler is that nearly every star has at least one planet larger than Earth but smaller than Neptune. We’d really like to know what these mysterious planets are like and why we don’t have them in our own solar system.” 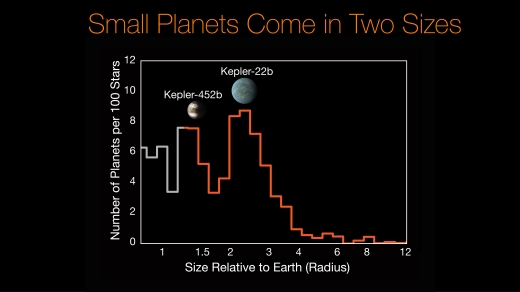 Image: Researchers using data from the W. M. Keck Observatory and NASA’s Kepler mission have discovered a gap in the distribution of planet sizes, indicating that most planets discovered by Kepler so far fall into two distinct size classes: the rocky Earths and super-Earths (similar to Kepler-452b), and the mini-Neptunes (similar to Kepler-22b). This histogram shows the number of planets per 100 stars as a function of planet size relative to Earth. Credit: NASA/Ames/Caltech/University of Hawaii (B. J. Fulton).

The Keck work involved researchers at UC Berkeley, Harvard, the University of Hawaii, Princeton and the University of Montreal as well as Caltech, a multi-year project analyzing the Kepler spectral data to obtain precise measurements of the host stars, which then allowed the scientists to refine the sizes of the planets orbiting those stars. Why the planets exist in two distinct groups — with a clear gap between rocky Earths and mini-Neptunes — remains problematic. Are Earth-sized planets the norm, with some of them simply obtaining enough of a gas envelope to become mini-Neptunes? Andrew Howard comments:

On the other hand, the researchers speculate, it may be that planets without enough of a gas envelope to fall into the gap can lose gas because of radiation from the host star. In this scenario, planets that wind up in the gap aren’t likely to stay there for long, producing thin atmospheres that are quickly blown off. Either scenario produces the populations we see in the new data, but we’ll need to learn more about the composition of mini-Neptunes to get a picture of why they seem to form so easily around other stars but not around our Sun.

The paper adds this:

…making a planet with a thin atmosphere requires a finely tuned amount of H/He. Second, photoevaporating a planet’s envelope significantly changes its size. Our observation of two peaks in the planet size distribution is consistent with super-Earths being rocky planets with atmospheres that contribute negligibly to their size, while sub-Neptunes are planets that retain envelopes with mass fractions of a few percent.