Our spacecraft have never encountered an object as far from Earth as 2014 MU69, but New Horizons will change all that when it races past the Kuiper Belt object on New Year’s Day of 2019. This summer is an interesting part of the project because planners will use it to gather as much information as possible about what they’ll find at the target. We have three occultations to work with, one of them just past, and they are as tricky as it gets.

But before I get to the occultations, let me offer condolences to the family and many New Horizons friends of Lisa Hardaway, who died in January at age 50. Hardaway helped to develop the LEISA (Linear Etalon Imaging Spectral Array) spectrometer that brought us such spectacular results during the Pluto/Charon flyby. She was program manager at Ball Aerospace for the Ralph instrument that contains LEISA. Mission scientists used data from the instrument package to make geological, color and composition maps of Pluto and its moons. The mission team has now dedicated the spectrometer in her memory.

“Lisa played a critical role on several of Ball’s more significant scientific programs from New Horizons, Hubble and Orion, to the Boeing F/A 18 E/F fighter jet and other national defense projects,” said Rob Strain, president of Ball Aerospace in Boulder, Colorado. “She made a positive impact on the careers of many, and her contributions will continue to give back for years to come.” 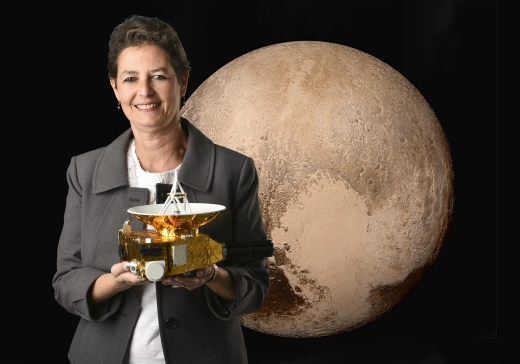 The MU69 occultations should provide useful data as we learn more about the KBO encounter environment. The first event occurred on June 2-3, with observers in Argentina and South Africa — 54 telescope teams in all — trying to track the shadow of MU69, which had occulted a star. Alan Stern, principal investigator for New Horizons, explains the goal:

“A tremendous amount had to go right to correctly execute such a massive observation campaign, but it did. The main goal of these observations was to search for hazards; the secondary objective was to try to glimpse the occultation of MU69 itself, in order to learn its precise size. Scouring all the dozens of datasets for these two objectives is going to take us a few weeks.”

Predicting the narrow stripe of MU69’s shadow over the Earth called for data from the European Space Agency’s Gaia mission as well as the Hubble Space Telescope. Remember that it was only in 2014, after a determined search, that the Hubble instrument discovered the 45-kilometer object, which is only 1/10,000th the mass of Pluto, although ten times larger than the average comet. Just the kind of KBO we’d like to study, in other words, but one we’ve had to characterize quickly in preparation for the upcoming flyby. 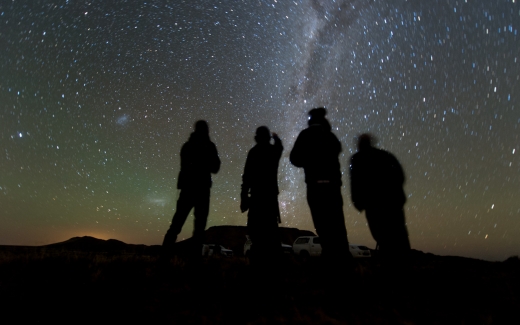 Image: Four members of the South African observation team scan the sky while waiting for the start of the 2014 MU69 occultation, early on the morning of June 3, 2017. The target field is in the Milky Way, seen here from their observation site in the Karoo desert near Vosburg, South Africa. They used portable telescopes to observe the event, as MU69, a small Kuiper Belt object and the next flyby target of NASA’s New Horizons spacecraft, passed in front of a distant star. Credits: NASA/JHUAPL/SwRI/Henry Throop.

As the data from the recent occultation are analyzed, we can look forward to another on July 10 and a third on July 17. For the July 10 event, mission scientists will use the Stratospheric Observatory for Infrared Astronomy (SOFIA), a 2.5-meter airborne telescope mounted in a Boeing 747SP jet. SOFIA can work at 45,000 feet, well above intervening clouds and capable of providing better data than the army of small telescopes used in the June occultation.

For the July 17 occultation, two dozen 40-centimeter telescopes will be deployed to Patagonia, where observers hope to scan more deeply for any debris around MU69. The star being occulted will be the brightest of the three, offering the best prospect for such detections. To track all this, keep an eye on the New Horizons KBO Chasers page, but as we get close to the event check the project’s Facebook page and the Twitter hashtag #mu69occ.