When you find a protoplanetary disk that displays unusual properties, the suspicion grows that an unseen planet is causing the phenomenon. The young Beta Pictoris is a classic case in point: Here we see disk asymmetry, with one side of the disk appearing longer and thinner than the other, and a warp that could be caused by the planet known as Beta Pictoris b.

Or consider an extreme case, HD 142527. A T Tauri star in Lupus, HD 142527 displays an inner disk that is tilted by about 70 degrees (see HD 142527: Shadows of a Tilted Disk). Such a striking offset could be caused by an encounter with another star, though there no good candidates. Are we seeing the effects of proto-planets? 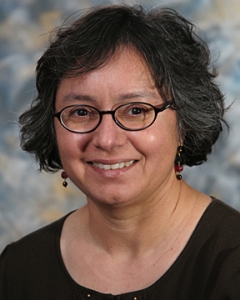 All this comes to mind because of what Kat Volk (JPL) and Renu Malhotra (Lunar and Planetary Laboratory, University of Arizona) are seeing in our own Solar System. Their analysis of the more distant regions of the Kuiper Belt shows that objects there display an offset of about eight degrees from the so-called ‘invariable plane’ of the Solar System.

That tilt needs explanation, and the authors of the new paper speculate that it’s the result of an unseen mass. We may be dealing with a Mars-sized object orbiting roughly 60 AU from the Sun, its orbit tilted by that same eight degrees to the average plane of the known planets.

Let’s dig a little deeper into this. By the ‘invariable plane’ the authors mean the average inclination of objects orbiting the Sun. In our system, most of this effect comes from the angular momenta of the gas giants, and we find that the plane is within 0.5° of the orbital plane of Jupiter. No surprise there, but when Volk and Malhotra studied the orbital planes of some 600 Kuiper Belt objects, they found the aforementioned tilt of eight degrees in KBOs from 50 to 80 AU from the Sun.

While closer KBOs remain near the invariable plane, more distant KBOs do not. The researchers believe the finding is statistically unlikely to be a fluke due to the the observational sample, putting the possibility in the 1-3% range. Calculating the effects of a planetary mass object on a band of KBOs from 50 to 80 AU, Volk and Malhotra believe they are seeing the effect of something larger than a typical dwarf planet.

Whether or not we are dealing with something as massive as a planet depends upon the strength of alternative explanations. The authors discount the idea that a passing star could have disrupted the Kuiper Belt. From the paper:

… such a perturbation would have to have occurred recently enough that subsequent secular precession of these new orbit planes about the invariable plane has not had sufficient time to relax the KBOs’ mean plane. The precession timescale at a = 50 au is ∼ 5 Myr and it is ∼ 15 Myr at a = 80 au. This means that any transient impulse perturbation of the mean plane of objects in this semi-major axis range will tend to be erased by differential secular precession about the invariable plane on timescales of ∼ 10 Myr. This timescale implies a perturbation much too recent to be a result of stellar flybys (e.g., Levison et al. 2004) or rogue planets (e.g., Gladman & Chan 2006). 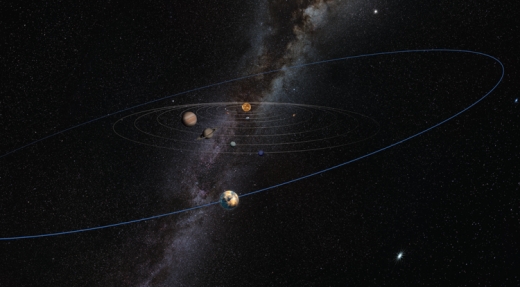 Image: A yet to be discovered, unseen “planetary mass object” makes its existence known by ruffling the orbital plane of distant Kuiper Belt objects, according to research by Kat Volk and Renu Malhotra of the UA’s Lunar and Planetary Laboratory. The object is pictured on a wide orbit far beyond Pluto in this artist’s illustration. Credit: Heather Roper/LPL.

A planet in the outer Solar System inevitably calls up thoughts of the still sought Planet 9 (or, if you prefer, Planet X), a massive object if it exists, and one predicted to be as much as 700 AU from the Sun. Malhotra and Volk are working with something much closer:

Achieving a significant change of the mean plane in the 50–80 au semi-major axis range requires a much closer perturber, because, absent a secular resonance, the forced plane of a KBO is nearly unaffected by an additional planet unless the KBO’s semi-major axis is sufficiently near that of the planet.

We can say a few things about such an object. The authors argue that the observed population of KBOs in the 50 to 100 AU range places an upper limit on its mass. Too much mass and the object would have cleared this region of KBOs over the age of the Solar System — the largest possible value for its mass can be calculated at 2.4 Earth masses. A Mars mass object on a moderately inclined orbit at a semimajor axis of 65-80 AU fits the data well.

As to why such an object has yet to be detected, the authors note the difficulties working in regions near the galactic plane and also point to unsurveyed regions at higher ecliptic latitudes where relatively bright objects (magnitude ~ 17, assuming an albedo based on an icy dwarf planet’s surface) might be hard to spot. “It appears not impossible that a perturber on the order of Mars’ size and mass, at such close distances (∼ 65–80 au, as required to perturb the Kuiper belt’s mean plane) remains to be discovered.”

This University of Arizona news release offers Malhotra’s speculation that the Large Synoptic Survey Telescope, scheduled for first light in 2020, may be able to spot the object. Indeed, the instrument’s surveys are expected to increase the number of observed KBOs from 2000 to 40,000, an increase great enough to offer hope that we’ll find any objects like these.

The paper is Volk & Malhotra, “The curiously warped mean plane of the Kuiper belt,” accepted at the Astronomical Journal (preprint).

Next post: Magnetic Reconnection at the ‘Planet of Doubt’