The prospects for life around M-dwarf stars, always waxing and waning depending on current research, have dimmed again with the release of new work from Christina Kay (NASA GSFC) and colleagues. As presented at the National Astronomy Meeting at the University of Hull (UK), the study takes on the question of space weather and its effect on habitability.

We know that strong solar flares can disrupt satellites and ground equipment right here on Earth. But habitable planets around M-dwarfs — with liquid water on the surface — must orbit far closer to their star than we do. Proxima Centauri b, for example, is roughly 0.05 AU from its small red host (7,500,000 km), while all seven of the TRAPPIST-1 planets orbit much closer than Mercury orbits the Sun. What, then, could significant flare activity do to such vulnerable worlds? 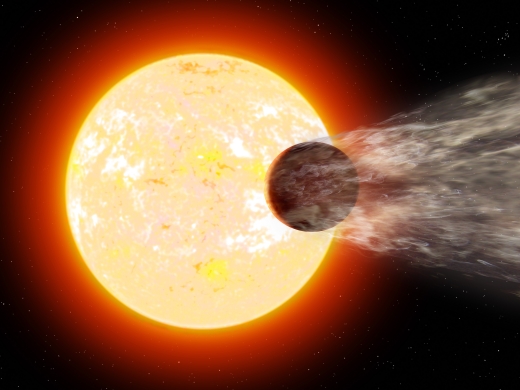 Image: Artist’s impression of HD 189733b, showing the planet’s atmosphere being stripped by the radiation from its parent star. Credit: Ron Miller.

Working with Merav Opher and Marc Kornbleuth (both at Boston University), Kay has homed in on coronal mass ejections (CMEs), the vast upheavals that throw stellar plasma into nearby space. While red dwarf stars are significantly cooler than our G-class Sun, their CMEs are thought to be far stronger because of their enhanced magnetic fields. From the paper:

A strong planetary magnetic field could counteract at least some of the resulting flare activity, but even there a possibility of strong erosion of the atmosphere remains. And if the planet is tidally locked, some recent work suggests little to no magnetic field can be expected.

The paper outlines the process when a CME hits a nearby planet. One problem is extreme ultraviolet and X-ray flux (XUV) which can heat the upper atmosphere and perhaps ionize it. If such radiation gets through to the surface, it can damage any potential life-forms there. While it turns out that an M-dwarf habitable zone planet receives an order of magnitude less XUV flux than Earth when the star is quiet, the flux jumps as high as 100 times Earth’s during the star’s frequent flare activity.

Significant CME activity also makes the planet much less likely to retain its atmosphere as a shield for life on the surface. A CME compresses whatever magnetosphere the planet has, and in extreme cases, say the authors, can exert enough pressure to shrink the magnetosphere to the point where the atmosphere can be seriously eroded.

Kay’s team modeled the effects of theoretical CMEs on the red dwarf V374 Pegasi, using a tool Kay developed for CME modeling called ForeCAT. They found that the strong magnetic fields of the star produce CMEs that can reach the so-called Astrospheric Current Sheet, where the background magnetic field is at its minimum. The same effect occurs with our Sun, when solar CMEs are deflected by magnetic forces toward the minimum magnetic energy.

At the Sun, the Heliospheric Current Sheet — the local analog to a different star’s Astrospheric Current Sheet — is a field that extends along the Sun’s equatorial plane in the heliosphere and is shaped by the effect of the Sun’s rotating magnetic field on the plasma in the solar wind. The HCS separates regions of the solar wind where the magnetic field points toward or away from the Sun.

Let’s dwell on that for a moment. Here’s what a NASA fact sheet has to say about the Heliospheric Current Sheet: 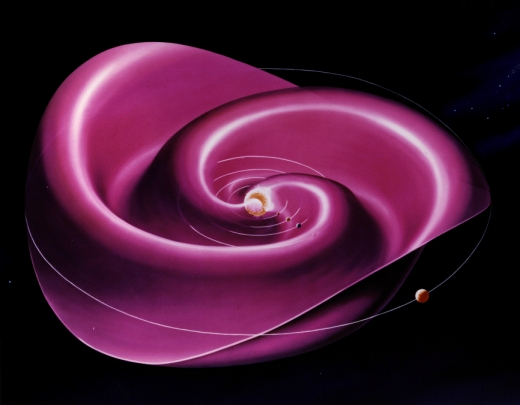 Image: The Heliospheric Current Sheet results from the influence of the Sun’s rotating magnetic field on the plasma in the interplanetary medium (solar wind). The wavy spiral shape has been likened to a ballerina’s skirt. The new work uses a software modeling package called ForeCAT to study interactions between CMEs and the Astrospheric Current Sheet around the red dwarf V374 Pegasi. Credit: NASA GSFC.

Kay and team have modeled the Astrospheric Current Sheet expected to be found around M-dwarfs like V374 Pegasi. The authors find that upon reaching the ACS, CMEs become ‘trapped’ along it. Planets can dip into and out of the ACS as they orbit. A CME moving out into the Astrospheric Current Sheet around an M-dwarf can cancel out a habitable zone planet’s local magnetic field, opening the world to devastating flare effects. The upshot:

The authors calculate that a mid-type M-dwarf planet would need a minimum planetary magnetic field between tens to hundreds of Gauss to retain an atmosphere, values that are far higher than Earth’s (0.25 to 0.65 gauss). CME impacts as numerous as five per day could occur for planets near the star’s Astrospheric Current Sheet. The only mitigating factor is that the rate decreases for planets in inclined orbits. The paper notes:

The sensitivity to the inclination is much greater for the mid-type M dwarf exoplanets due to the extreme deflections to the Astrospheric Current Sheet. For low inclinations we find a probability of 10% whereas the probability decreases to 1% for high inclinations. From our estimation of 50 CMEs per day, we expect habitable mid-type M dwarf exoplanets to be impacted 0.5 to 5 times per day, 2 to 20 times the average at Earth during solar maximum. The frequency of CME impacts may have significant implications for exoplanet habitability if the impacts compress the planetary magnetosphere leading to atmospheric erosion.

So we have much to learn about M-dwarfs. In particular, how accurate is the ForeCAT model in developing the CME scenario around such stars? As we examine such modeling, we have to keep in mind that magnetic field strength will change with the type of M-dwarf we are dealing with. Based on this research, only early M-dwarfs are likely to maintain an atmosphere.

The paper is Kay, Opher and Kornbleuth, “Probability of CME Impact on Exoplanets Orbiting M Dwarfs and Solar-Like Stars,” accepted at the Astrophysical Journal (preprint).